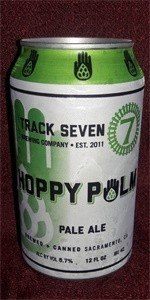 Notes: When a brewer is trying to decide whether they want to use a particular variety of hop in a new brew, they’ll take a few hop blossoms and roll them between their hands to tease out the aroma. After a hop selection a few years ago, Brewmaster Ryan and Cellermaster Geoff walked away with green, sticky, hoppy palms. The product of that hop selection, Hoppy Palm Pale Ale, has been aggressively dry-hopped with Cascade, Chinook, and Galaxy hops, producing an American Pale Ale with a light body and minimal sweetness. If you pay close attention, you’ll notice tropical notes from the Galaxy hops, with the Cascade hops giving it a hint of citrus as wel
View: More Beers | Place Reviews
Recent ratings and reviews. | Log in to view more ratings + sorting options.
4 by FLBeerGuy from Florida on Mar 07, 2020
4.1 by bouncepass from California on Aug 05, 2019
3.94 by BlueSpader from Washington on Mar 18, 2019
4.09 by CJNAPS from California on Oct 22, 2018
4.04 by Donkster46 from Washington on Sep 28, 2018

Golden yellow in color with orange hues and a heavy haze. Poured with a moderate, creamy, bright white foam with excellent retention. Medium, pulpy, citrus orange aromas with medium maltiness. Medium light bodied with medium carbonation and a light creamy feel. Medium malty flavors up with caramel and bready notes followed by light citrus and spicy hop flavors. Medium hop bitterness through the middle. Orange rind and malt flavors to the end. Finished semi-dryly with light malty notes followed by lingering hop bitterness. Great look. Aroma balance tilted to the hoppy side, flavor balance tipped to the malty side. Bitterness at the finish lingered a bit too much. Pretty easy drinking nonetheless.

Aroma is fruity and pithy with some carbonics and minerals.

Taste has pleasant hop fruity qualities backed by caramel to bready grain and a touch of pithy to grassy bitterness that lingers.

A: Citrus and floral hops coupled with light toasty malts.

A: Light gold color, slight haze, with a thinnish white head that has decent retention.

O: Alright; the beer has a very thin body and the components could be better balanced, but still drinkable.

Had this at the source at the end of September on way down to the Hollywood Bowl to see the final Tom Petty show. Pours a slightly darker yellow/gold with some light amber thrown in. A small amount of 1/3" white head on the top. Decent hoppiness, I seem to smell Simcoe, Citra and Amarillo, but who knows.

Taste is pretty standard for a good west coast pale ale. You get a bitterness in the range, prolly around 50ibu, pale toasted malts, that Simcoe bitterness is striking, I'd be surprised if that wasn't the or one of the bittering hops used here. Seems all over it. Nice mild grain along with that. Even though its below 6% abv, it does seem to have a stickiness about it that might not make for the most sessionable pale ale on a summer day. Nonetheless, its a pretty good 2nd tier pale ale option.

12oz can, undated but known fresh, poured into a 14oz snifter glass. Enjoyed on 4.8.17, reviewed from Tasting Journal.

The beer pours a bright orange color, copper hues with a mild chill haze and a foamy white head that has good retention and great lace. The aroma has a lot of citrus, very tangy and juicy, spicy grapefruit peel, snappy tropical fruits with a lightly floral bouquet and a touch of piney hop with a hint of pale grain. The flavors are good, super hoppy, bright with some nice bitterness behind the more delicate juicy flavors. Plenty of pineapple, lots of citrus, dank grassy and floral character, a bit of pine, smooth pale grain. The mouthfeel is good, coating, creamy medium body, nice lively carbonation with a very dry finish.

Pours a golden amber in color with a thick, frothy head atop. Lacing lines the glass as you drink. Carbonation looks mild. Very hoppy on the nose; mostly floral/grassy with tropical fruits and a hint of spice and malted caramel. Taste follows the nose well; grassy and tropical fruits up front followed by a grainy sweetness and quickly subsiding back into a bitter hop flavor that lasts on the tongue. Mouthfeel is light and crisp with the perfect carbonation. Overall this is a very tasty and very drinkable, hoppy pale ale. I'm diggin' it. Cheers!

Appearance - Pours relatively clear and golden orange in color with a white, half-finger width head that dissipates rather quickly, leaving a mostly barren surface with a small island of suds in the center and a fair ring clinging to the side of the glass. No lacing save a couple of tiny spots.

Smell - Moderate aroma, but notes of passionfruit, orange and a hint of peach can be found, along with a crackery bread sweetness riding well beneath.

Taste - A bit stronger in flavor than the nose would indicate, but follows in character; passionfruit with lesser orange make up the bulk of the flavor. A touch of peach mid-taste, then notes of pine and spice. Aftertaste lingers with mild pith bitterness and the faintest of bread character.

Overall - A good, tropical flavored pale. Maybe relies a bit too much on the hops, as the malts are mostly lacking, and certainly don't leave an impression. I'll finish the sixer, but this won't be on my shopping list anytime soon.

This is easily one of my favorite pale ales.
The look is a nice golden hue with a very slight cloudiness to it.
The aroma is subtle but pleasant.
The taste is what makes this one of my favorites from Track 7. It is mildly bitter and hoppy but with a a pinch of sweetness.