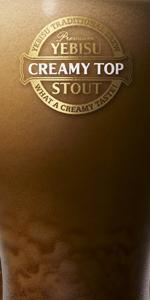 The Irish creamy style stouts are great. Sapporo making Yebisu and it is every bit as good as Kilkenny's (Guinness). Not heavy, looks, tastes, and feels good with taste but no lingering aftertaste. Goes down TOO good meaning I could go too fast! Slightly coffee to me which could be why I like the cream stouts. As with Asahii it needs pulled from a tap in Japan. Beer in States made under license does not compare.

Appearance: It pours a beautiful pitch-black body with a brown three finger-head. Overall, it looks like a standard stout.

Smell: All of the aromas are a bit subdued but roasted malts are noticeable right away followed by hints of coffee and caramel.

Taste: The taste follows the nose. Roasted malts are followed quickly by a hint of coffee. It lacks the complexity of many micro stouts but it still does enough to represent the style.

Mouth feel: A little watery but perhaps a bit fuller bodied than a standard Guinness (the beer it seems to be imitating).

Overall: It really does seem like Sapporo was trying their best to imitate Guinness. It is a good beer but, just like a standard Guinness stout, chocolate notes and other flavors associated with better representatives of the style are not apparent. I do think the body may be slightly fuller than other macro stouts on the market. Overall, it is a good brew I would have again but, nothing spectacular and not quite as good as a Guinness Extra Stout.

Had this on tap at the Sapporo Museum in Ebisu, Tokyo. Poured into a wide-mouth half-pint glass. Roasted malts and walnut flavor. Mouthfeel almost crackling and everlasting. Amazing feel and cool roasted aftertaste. Sedimentary lacing like a cliffside. Beautiful wavy cream top just as they promote. Laces and keeps better than a Guinness or a Murphey's. Overall, a wonderful Irish stout that competes with the best.

Nitro-tap at the Yebisu Museum Brewery.

A: Served a black color with a tan head that fades slowly to some lacing.

S: Mild aroma of roasted malt with some chocolate and coffee.

T: taste follows the aroma with roasted malt, with some chocolate and coffee. Mild bitterness and a dry finish.

O: Decent beer, not a bad take on an Irish stout. Could be a bit more robust.

This is Sapporo's attempt to cut into some of the popularity of Guinness in the local market as well as cater to Japanese brand patriotism.

A - This has a typical fine-bubble nitro head the beer itself is a very clear mahogany brown-red with some continued carbonation and for a stout it lets a lot of light through.

S - Smells were pretty tame. More foam than barley hop or yeast. Not bad but not inspiring.

T - Some roasted barely notes. A few light hop tastes. Some straw bitterness. All in all drinkable but not distinctive.

M - Well for a beer that calls itself creamy this one was pretty watery. Not a surprise for a highly filtered macro stout.

D - This is an easy to drink beer. It was carefully designed to not offend anyone. Somewhat smooth and somewhat tasty but overall another Guinness clone.