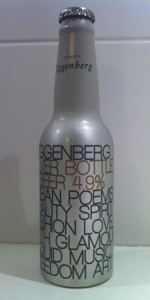 Notes:
View: Beers
Reviews: 6 | Ratings: 17 | Log in to view all ratings and sort
Reviews by MAB:

This one really grew on me. I give it and extra half point for the silver "bottle" but was nothing special in the glass.
For some reason, though, it worked. Dry, crisp, but hoppy enough and with a good malt balance.

Cool bottle. Definitely don't have to necessarily store this one in a dark place.

A- The bottle is quite awesome......the golden colored brew has fine champagne like bubbles rising swiftly to the top....these are white in color....the head is pretty mild and the lacing is actually quite good with animal like figures forming.....not bad looking!

T- My palate is met with basic grainy malts, some cleansing rice grains.....perhaps some corn used in the boil. It's pretty basic....I'm not that impressed really. I'm trying to find things I like here.....yeasty bread like notes and the finish is somewhat metallic like, and there is a horrible lingering oily aftertaste....yuck

M/O- Light bodied, easy going carbonation that becomes flat with time best describes this beer. I would have been disappointed to get this one in my advent calandar and I'm glad I've tried it....I wouldn't pursue this one again and put it on the same lines as your standard macro lagers.....pass.....the best thing about this beer is the bottle itself.....if you need something to kill weeds this may do the trick. Blah!

330ml aluminum bottle, day 8 of the 2016 Craft BeerAdvent calendar - pretty slick packaging, except for maybe the silly hippy (or hipster? I can't tell) words on the label. So, Euro Silver Bullet it is!

This beer pours a clear, medium golden yellow colour, with four fingers of puffy, finely foamy, and mildly bubbly bone-white head, which leaves some decent tiered frilly and chunky lace around the glass as it slowly sinks away.

The carbonation is fairly tame in its insouciant frothiness, the body an adequate middleweight, and generally smooth, with a touch of that loitering hoppiness not playing nice with the other kids. It finishes off-dry, the cereal malt carrying on with the remains of the noble hop day.

Overall, this is a so-so Euro lager, made just well enough, and exhibiting some of the typical flaws, which is weird, because said flaws are often caused by green bottles and all, and here, we have no such thing. Something's a tad amiss in that Austrian castle, and yet I'm too tired to care anymore.

Golden filtered with no carbonation and half finger of white head.

Day 8 on the 2016 Craft Beer Advent Calendar
Pale amber with a one inch head that reduces daily quick with little film and some lacing. Traces of sediment floating amongst carbonation.

Slightly roasted hops scent with subtle flowery hiding in the back.

Taste comes a lot like advertised and what I get from the scent. Smooth doughy hops

Light and clean with nice carb level tickling the tongue

I have a bias against tin bottles as cheap beer is served in them on cruises I’ve done a lot of so low mark in presentation. Also just maybe one step up from those beers though would the this over a Bud light while sunning on the deck anytime but an Austrian Brew house can do better.