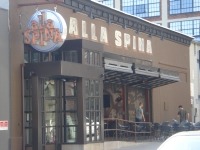 Reviewed by RutgersBeerGuy from New Jersey

The tap list is of medium length and well-selected. There's a deference to local options. Both house beers are made by Victory, a saison and a gose. A cask of Yards Philadelphia Pale Ale with grapefruit was on the handpump. I had a Tired Hands Alien Church (IPA), a Victory Round Robin (Franconian-style lager), and a Tired Hands Reactionary (dry-hopped oat saison). The beers were in great shape and all were served in branded Teku glasses.

The menu encourages grazing. There are a range of small plates, included "per piece" options on oysters, prawns, and so on. There's salumi. The entrees are focused on sandwiches, with a few plated options as well. We had pig head nachos, lemon and parmesan wings, poutine with short rib gravy, pig tails, a mortadella hot dog, and the decadent carbonara burger. Everything was excellent.

Our server was friendly and considerate and our water glasses were frequently refilled.

The crowd trends young and hip and it seems to be a pilgrimage spot for some, as evidenced by the cabs dropping people off throughout our meal.

Rated by Jim_Ford51 from Pennsylvania

Alla Spina looks beautiful and "very professional". Their website describes it as an "Italian gastropub" and I think that is very fitting. Big place, well designed, an industrial feel. Very busy on a Friday evening but the wife and I managed to find a place at the bar. Great service from knowledgeable servers who know their beers and food and were able to recommend stuff.

Pay attention to the bottle menu, which includes good stuff from Lost Abbey, Nogne, Perennial, Russian River and Brewer's Art. A bottle of Evil Twin Falco was only seven dollars.

This joint is outstanding all the way, among the best in Philly.

Reviewed by rfgetz from New Jersey

4.3/5  rDev -0.9%
vibe: 3.75 | quality: 4.5 | service: 4.25 | selection: 4.25 | food: 4.5
Have visited a few times for the restaurant, and finally made it back to hang at the bar. Atmosphere goes for an industiral/garage artsy/hipster feel with lots of sparse decor showcasing structural elements - concrete slab floor, exposed ceiling beams etc - with touches of graffiti and odd art about the place. Big square bar with 20+ seats along 3 sides. 3 sections of seating with a little lounge like area off the kitchen. Outdoor seating when it is weather appropriate. 2 TVs off the dining room and bar area.

Solid beer selection - 20 or so brews on tap (2 cask) with half domestic craft and half Italian craft. About half of the domestic craft are local beers with a few one -off and house beers from Victory. The Italian and domestic crafts can be pricy - $11-$12 for an Allagash or Baladin 10oz pour, but it beats $25 for a whole bottle at some stores if you just want a taste. Locals go for $5-$6 for a 10oz. Bottle list is expansive and covers a wider range of foreign and domestic craft, lots of locals and a "vintage" list. Solid wine (one on draft!) and cocktail (one on draft!) list.

Service always attentive and friendly, and unlike many restaurants, they seem to hold onto the good employees.

For the neighborhood, not many other places I could recommend for fantastic food and great craft beer at the same place. Wish some of the prices were toned down a few bucks.

4/5  rDev -7.8%
vibe: 3.5 | quality: 4 | service: 4 | selection: 4 | food: 4.5
This is a pretty nice place. It's a bit out of the way from where I typically hang in the city, but it's not too far away from the Electric Factory and Prohibition Taproom, so it's not unheard of that I'd go here once in a while. It's a medium-sized Italian restaurant, contemporary decor, graffiti-style art on the walls, a good bar that seats about 20 people or so, plenty of tables. There are a few seemingly upscale restaurants in the area, but you don't really need to get dressed up for this place.

I've heard mixed reviews on the service, but I personally have no complaints, although it was a very slow Sunday night when I first visited. The bartender was friendly and knowledgeable about the beer on tap and the food, and everything we ordered came out quick. There was a nice selection of 15-20 beers on tap, including some rather uncommon and high-priced imports (Baladin, Contessa, etc.), as well as some more friendlier-priced US craft options (Yards, Elysian, Sixpoint, etc.). I rate this place as "pricey" mainly based on the beer prices. Draught beers ranged from $6 to $12, all being served in teku glasses; and the bottle list, while rather impressive, was way out of the price range for casual drinking ($7 for a Peroni? $33 for Jolly Pumpkin?), though there were a few relatively acceptable bottles, if you feel like a DFH 60 Minute or something. Cocktails also available.

The food was great, and definitely the high point of the place. Prices on the food weren't too too bad, considering the nature of the restaurant, with smaller plates in the $6-15 zone, good-sized meals in the $12-20 zone, and a few higher-priced entrees. I got a plate of gnocchi that was melt-in-the-mouth amazing, and my wife got the maple-glazed fried chicken that was also extremely tasty and well-made, not at all greasy. Desserts were also available, including beer milkshakes, which sounded interesting.

This isn't really what I'd call a "destination." If you're into the craft beer scene and you're in this area, you're most likely going to be at Prohibition Taproom. But this is still a nice place with a nice selection, and a good place to go with your significant other for a good dinner. I wouldn't mind going back sometime.