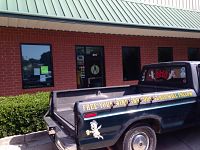 Reviewed by ssimpson89 from Illinois

Beers were all solid, the bigger beers were the stars. There were about 9-10 beers on tap

Worth a visit if if the area

4.54/5  rDev -1.9%
vibe: 4.25 | quality: 4.5 | service: 5 | selection: 4.25
Friendly people, 5-6 beers on draft for tour in tiny tap room, benches and picnic tables outside with board games (and "Operation"), BHB has a very laid-back vibe. Notably, the failure to try all six of your allotted samples doesn't waste your tour fee, as there are coolers with packaged beers redeemable as souvenirs with your unused sample tickets.
Oct 20, 2016
Rated: 4.46 by mbgeibel from Florida

Reviewed by roachkid40 from Georgia

4.19/5  rDev -9.5%
vibe: 4 | quality: 5 | service: 4 | selection: 3.5
Had a great time here visting this hidden gem. Approached the parking lot to see a game of corn hole being played and thought it was a private party. Luckily, it wasn't. A year or so ago, their Big Shanty (Graham Cracker Stout) quickly became one of my favorites and they had it on tap with nitro lines!!!. I'm pretty sure I used all of my tickets on taste testing that. If they had their Didgets (Blood Orange IPA) available, it would have made for a split decision.

As for the tour- its a small brewery, so it was a small tour. The guide (or the brew master of the sours), was very knowledgeable.

Reviewed by BeerDaveGA from Georgia

Rated by CraigTh from Georgia

Reviewed by Shanty76 from Georgia

5/5  rDev +8%
vibe: 5 | quality: 5 | service: 5 | selection: 5
Roadtrip destination for myself and two fellow beer lovers. Selection was incredible...all offerings were outstanding and many super-unique. Very personable staff and guests as well. They were great sports in regards to our Tri-Corn Mafia maiden tour. EXCELLENT and can't miss destination!
Feb 01, 2016

Reviewed by tjs1885 from Pennsylvania

4.36/5  rDev -5.8%
vibe: 4.25 | quality: 3.75 | service: 4.5 | selection: 5
This place is small and seems to be still in its infancy. But I always believe small places often yield some of the best beer experiences. They had a nice variety of over a dozen beers tapped from sours to IPAs and even pushed the envelope with experimenting with maple syrup and captain crunch (which worked). Most beer was average to above average and out of the 6 I was allowed to try, I enjoyed them all. Even though it got packed, the line to pour beer went very fast. The guy that was greeting people was really hospitable and talked to us as if we were not drinking our first craft beer and was happy to beer their to talk all things Burnt Hickory. The next time I get back in the area, I plan to visit this place again
Aug 25, 2015
Rated: 4.89 by Hayden34 from Georgia

Reviewed by Nordbier from Georgia

4.85/5  rDev +4.8%
vibe: 5 | quality: 4.75 | service: 4.75 | selection: 5
Despite having been to a large many, I'm not sure I've ever taken the time to review a brewery. However, my experience at Burnt Hickory this week was so positive that I feel compelled to come and drop them a line. A note, however: my experience was definitely colored by the fact that I happened to come on a very slow day.

When my fiancee and I arrived at the tasting room we were immediately greeted by the owner and brewmaster, Scott. He gave us a rundown on the tour and the beers on tap before just hanging around all night and talking beer with me. Tunes were played through a small system and were nicely varied and eclectic, Scott clearly knows music. The bartenders were the brewers. Just a great vibe all around.

Since being introduced to their beers about a year ago I've continually been on the lookout for BH beers. After taking a look at their website and seeing that their core offerings hadn't change, I felt some hesitation in making the trip to Kennesaw. A few Georgia breweries I'd visited within the past month had a very limited selection comprised, often, of things I can find in Kroger, and I worried this would be the case with BH. I was thoroughly mistaken. On top of rarities and upcoming releases, they offered a robust cask selection of flagship beers they had tweaked (Peanut butter Big Shanty, Watermelon Ezekiel's Wheel, etc.). Most of these were at least interesting (their sour patch kid berliner-weisse was phenomenal) and the effort these guys put in to make a visit to the brewery worth it was incredibly refreshing. My only possible critique of BH is that they could probably use a bit more focus. Cranking out such a wide variety of beers, it would seem, limits their ability to really hone in on their core beers. However, the beers are already so solid, varied, and unique - objectively, and also in comparison to what's produced in the Georgia beer scene - that the shotgun approach seems their style. And it works.

As for service, it would be hard to ask for more. The owner and a large portion of the brewing staff hung out the whole time and were very accommodating. The tour was excellent, a welcome reprieve from the typical Brewing 101 schtick you hear at most breweries.

The location could certainly be better, and after looking at the brewhouse I get the impression that a move in the not-too-distant future will probably be necessary. Would be cool to see the brewery in a higher-profile spot, perhaps food truck accessible. All in due time. For now, this is easily Georgia's coolest brewery tour.

All in all, I will most definitely be back.

Reviewed by Brewser_Lewser from Georgia

Reviewed by BrewDogBarley from Georgia

4.93/5  rDev +6.5%
vibe: 5 | quality: 5 | service: 4.75 | selection: 5
open house and tastings are once per month. it ends up being like a giant festival and tons of fun. in a typical month there will be somewhere between 6 and 10 different rotating taps plus special hourly pours. for the April anniversary or other special events there will be even more.
Apr 08, 2015
Rated: 4.65 by memphischas from Tennessee

Reviewed by i2rt from Georgia

5/5  rDev +8%
vibe: 5 | quality: 5 | service: 5 | selection: 5
The only limit to the open house tours is the size of the BHB building itself. Everything else...beer, BHB Army Volunteers and the crowd are BIG!!
Now that the expansion is done and more BHB beer is hitting the market the open house tours are only going to get bigger and more fun.
If you haven't made it out, do yourself a favor and come join the fun. You never know what new creation Scott will pull out of the cooler to share with the crowd.

Reviewed by bobtoddler from Georgia

If I may ask, what more does one need? Sure, a cool westerly breeze wafting through the open windows, the dog contentedly sleeping on the couch, and the smell from a well-smoked brisket still lingering in the air are all good and fine, acceptable answers, but what else?

If you answered Burnt Hickory Brewing, then you're ahead of the game and joining the winning team.

There are certainly more breweries located in Georgia then when I started this beer thing. Many are very good. A couple are excellent. A few are true misses. Some are as bland and mild as a baby's fart. Oftentimes, trying to compare them is like comparing apples to oranges and oranges to fresh-baked pretzel bread.

Burnt Hickory's beers are big and they are bold. Yes, I know I throw that around far too often, but this time it's 100% accurate. Their Charred Walls of the Damned is the most fun you can have while actively fearing for your own life. The Kolb Farm Imperial Stout will leave you with way more blood to clean up in the morning than just about any other local stout available. All of their beers are good, many of them are exceptional. Just take care not to chug them down too fast, lest your friends mistake you for attempting to win a free T-shirt or get your name on a wall somewhere. I wish them all the best as they proceed through this time or growth and expansion.

I will now yield the floor.