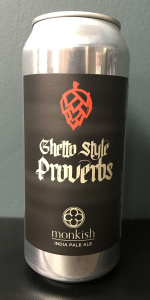 Canned 7/30/19. This is the most recent release of this brew. I am slowly working on making my way to some "older" offerings in my fridge, and this being one of them. It was great when I had it fresh and I'm curious to see how it is now.
L: Has that gorgeous bright yellow color I love in my NEIPAs. Hazy and somewhat murky with zero transparency. Very minimal head from the pour with lower end of moderate amounts of lacing. Color is perfection.
S: Tons of orange on the nose. It's juicy and inviting. Pineapple, mango, strawberry and lemon are also detectible, but orange is the star of the show. Very mild hop aroma to the beer, namely lending a grassy smell.
T: For the most part, and as far as I can remember, this has held up very well. Citrus and stonefruit forward with hints of pineapple, papaya and mango. Finish is yeasty with lingering flavors of grass and citrus. You know this is a citra beer by the taste alone.
F: May a touch thinner than when fresh, but still fantastic in my opinion. Light in weight, light to medium in body. Not as soft as when fresh but still has a lofty feel on the tongue to some degree. No booze presence and lower end of moderate in terms of carbonation.
O: I am a huge fan of single ipas. Given the status of Monkish, this lives up to any expectation I had going into it. A single IPA dry-hopped with citra? I'm game. Anyways, I am very glad to try and I would recommend/drink again. Cheers!

Tangerine soda vibes here; refreshing but not great. it would be nice on a summer day, I suppose...

Pours a nice hazy straw yellow. There’s a finger length of frothy white foam that slowly bubbles away. A weak but thorough amount of lace clings to the glass.

The nose is bursting with ripe tropical fruit that is followed by a more citrus-forward profile. There’s just enough bold hop / malt balance to create a really nice character to this beer.

The flavors here are really nice, and different than a lot of Monkish IPAs. The backbone has a nice biscuity malt character, but is also bursting with grapefruit and orange zest. The flavors are subtle, but work well together. Very smooth, easily one of the most crushable Monkish IPA’s I’ve had to date.

The weight to this beer is very crisp, not too juicy. The seltzery carb is super crushable. Very good.

A: Beer pours a light orange color with about a finger of kinda mixed soapy/fluffy white head. Full haze on this one... Not much--if any--light getting through. Nice lacing and some sticky alcohol legs on the glass.

S: Not as explosive as some of the other Monkish beers I've had recently. There's pithy orange, grapefruit juice, and some pineapple. Definitely a hint of malt character and some verrrry subtle bubblegum yeastiness. I also get a nice earthy, dank, maybe even catty quality on the finish.

T: Lots of spritzy orange and tangerine up front, but this one is notably danker and grassier than some of the other Monkish beers I've had. There's a little peach, maybe some pineapple there too. But overwhelmingly, it's bright citrus up front. Mid-palate, there's a crackery malt character, but it's super light. Hop flavor kinda falls off halfway through, and it returns on the finish in a much more earthy fashion.

M: Solid feel overall. It's pretty soft--not quite delicate, but definitely not abrasive in any way. It's pretty light overall, probably lighter than the ABV would suggest. There's a medium resinous bitterness that hits pretty hard on the finish and sticks around--probably the most west-coast-forward finish I've had on a Monkish beer. Just a touch of sweetness mid-taste to complement that citrus, but this beer leans more on the bitter than sweet end of the scale.

O: This is a good beer, but one of the weaker IPAs I've had from Monkish. While it has the soft mouthfeel and bright fruity aromas that I've come to expect from them, the taste really falls short for me. It starts off strong with that bright, pithy citrus, but the hop flavors really fall off through the rest of the taste. The finish is pretty bitter, leaving a lasting resinous feel on the mouth. I wouldn't call it a juicy beer, though it's still a far cry from the west coast 'bitter bombs.' I'm interested to see how this one develops with some more time, but as it stands, I think it's my least favorite of the Monkish IPAs I've tried.


Ghetto Style Proverbs from Monkish Brewing Co.
Beer rating: 93 out of 100 with 44 ratings