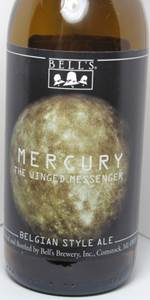 "This is one of a seven part series inspired by Gustav Holst's musical composition, "The Planets." Strap in and embark on a flavor tour of our solar system - in the order of Holst's piece, Mars to Neptune." Brewed in the style of a Belgian Pale Ale, release #3 in the Planets series, a one-off release in bottles and on limited draft.

(Appearance) Pours a frothy crisp head of a pastel white over a mildly hazy golden amber body with abundant pulpy sediment in tow and ample, lively carbonation. Retention is average and lacing is light and droopy. 3.75

(Smell) Unmalted wheat and light cracker and pale malts with a moderate sweetness, met with a yeast note that accents spring fruits, banana and peppery spices, notably coriander and clove. Aromatically, it plays close to an aromatically pleasing witbier, but not an overly original one. Potency is moderate. 3.5

(Taste) Malt body of pale malts and moderate cereal wheat with a creeping sweetness, a delicate yeast fruit note of banana and light citrus juice, and an effervescent peppered and dry finish. Very light in alcohol but considerably flavorful in malt complexity and yeast flavor, despite keeping a high drinkability. I enjoyed it but find it lulls in between styles, and makes it difficult to place. 3.5

(Mouthfeel) Texture is slick, clean, peppery and medium dry. Carbonation is high, generating a moderate frothiness and a briskly crisp finish. Body is shy of medium for the style, light/medium overall. Balance is slightly peppery and earthy bitter over sweet. Alcohol presence is very low and there are no off characters. 3.75

(Overall) Arguably the tamest of all of the planets beers by style, and not very disappointing so long as you're not expecting anything phenomenal. While falling under Belgian Pale Ale here, It certainly has a strong Belgian Wit ale angle going for it, with big pronounced hazy yeast, banana character and an assertive coriander and clove spicing. Altogether it's tasty and a pleasing experience, but pedestrian in comparison to the previous two entries in the series and undoubtedly to be compared to the ones forward. 3.5

The pour is vaguely hazed yellow that could be used for a urine sample. The nose is so weak I doubt it could curl five pounds: light fruits on a distant breeze, not much else.

Mercury is channeling some odd hefeweizen vibe. Middling wheat component is muddled by the fruity esters & white grapes, which is the one taste that jumps out. Dim spiciness that leans into white pepper. The finish is an odd yeastiness that isn’t funky, but leans into dirty farm soil, which clashes blade-on-blade with the fruit aspects. Six ounces? About three too many. Light & effervescent, which is one of the few positives I can draw from this rather unsettling experience.

Bell’s doesn’t miss often, but this is a big cut at a curveball in the dirt. Not undrinkable, but not enjoyable, & I’m really happy I only seized on a single. Sub-mediocre.

These Bell's planet series beers have been great, this one especially -- a drinkable, low-ABV, malt-forward Belgian with tons of Midwestern influence and flavor to the max!

Alright this is not the best beer they have produced by any stretch. But I am not going to jump on this group-think mentality and blow it out as a piece of garbage. Now, I don't expect much from this style so I really didn't but its not bad really.

Aroma: Some yeasty esters, very much a Belgian style ale in that regard. Some herbal notes clove, etc. Not a really bad aroma reminds me of a light farmhouse ale, not a lot of the funk but similar in style.

Taste: Nice clean citrus and yeast flavor. Its really not that bad of a beer. Honestly this one was much better than Venus in my opinion.

Overall: Its a one time deal, get over it, they are trying something different and there is this new thing where everyone is shitting on Bell's but honestly this beer is not that bad.

Pours golden yellow with a slight rusty hue and a finger head of bubbly foam.

Ugh, the black pepper aroma carried over into the sip. Not good. Way too much black pepper/herbal spice and not enough sweet.

Packaged 12/4/14 so was probably best consumed fresh rather than nearly 2 months later. Pours a very light head that dissapates quickly (odd for this style). Nose was a lighter bready yeast that reminded me more of a euro lager than a Belgium pale. Taste was a huge let down as it had a skunkiness and profile more similar to a Heineken. The biscuity malt and forward floral dry hops I enjoy in a Belgium PA were missing almost completely. A real dud from a well respected brewery

SO much better than Venus (obviously not as good as Mars) but I love the unfilteredness of the beer. Very solid and although I probably give it more credit than it deserves, for a unique series of beers, might as well enjoy it.

The unfiltered part of the beer makes this beer pretty great!

Not very good should have listened to the reviews nice try bells still love you guys for black note so it's all good!!!

A beautiful pale straw beer with a bright white head. As someone who doesn't really enjoy Belgians, I was very impressed with this. The malt was able to shine through the pungent Belgian yeast. This would be a great beer if you wanted something a little different on a hot summer day.

A: Lemon yellow, slightly hazy, 1-finger white head with decent retention but minimal to no lacing.

T: A bold flavor despite the lowish ABV with strong pils breadiness, lemon mixed with apple, pear, and apricot, and finished with phenolic peppery yeast esters. Hop bitterness is medium, more than I would have expected from the nose.

O: A very good Belgian pale ale, but really nothing terribly special. Solid all the way though.

Been a while since I've tried a new Bells beer.

Light yellow with a thin, white head with decent retention and lacing. The nose is rustic with bread, mild honey, moderate spice - pepper and mild phenols ,- and a great hop character, earthy and mildly lemony. I do get a mild orange peel and grains of paradise character as well. The palate opens with a dry, crisp, snappy cracker malt character and a wonderfully complementary hop flavor and bitterness, a blend of earth, lemons and green grass. The mid palate has some of the yeast expression, spicy and mildly phenolic. Drying and crisp on the finish, this beer is light in body, highly carbonated and has lingering flavors of crackers, earth, lemon and a little floral character. Excellent.