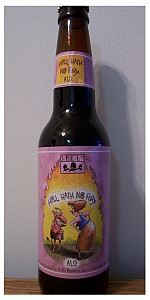 Notes: Originally conceived along the lines of a Belgian Dubbel, Hell Hath No Fury... Ale morphed during development into something entirely different. Blending a pair of Belgian abbey-style yeasts into a recipe more akin to a roasty stout, Hell Hath No Fury... Ale offers up warm, roasted notes of coffee & dark chocolate together with the fruity & clove-like aromas.
View: Beers | Place Reviews
Reviews: 676 | Ratings: 1,476 | Log in to view all ratings and sort

Served on tap at Central Market (Houston, TX) in a plastic pint glass. Deep, dark brown color with a modest head of light brown foam. Huge malty notes of dark chocolate, roasted grain, figs and dates. Medium body, smooth feel, and light to medium carbonation. A big malty brew with hints of its ABV, but maybe not as much complexity. Still, a terrific beer to accompany Monday night grocery shopping.

An even pour yielded a big khaki head; frothy lace.

Cream & mildly rich with a faint bite; interesting but not one you'll long for.

A: Pours a very dark brown, but distinctly brown rather than black. A thin light tan head quickly fades to a ring of foam. Low level of visible carbonation, and essentially opaque.

T: Malty sweet, some chocolate in the roast. Sweet raisins and prunes again, with some Belgian yeast ester fruitiness as well. Light brown sugar and Belgian rock candi. More fruity yeast esters in the hang with just a bit of boozy character.

M: The body seems surprisingly light, and light enough to its detriment. It's lighter than most examples in the style, but certainly an exemplar of the concept that not all dark beers are heavy. Average carbonation sensation for style. The alcohol flavors are much more restrained than the nose suggested.

O: It sure doesn’t taste as good as it smelled. The aroma was big and dark and complex and boozy. The flavors seemed watered down by comparison. Not bad at all, but my mouth was watering from the aroma and it just didn’t pay off. A decent beer, but nothing I’d be in a hurry to repeat though.

Pitch black color with a thin caramel head with short retention.
Nice aroma with lots of dark chocolate, cocoa, mild clove and dark fruits.
Flavor with notes of coffee, some cloves, dark chocolate, prunes on syrup, roasted malts, a bit of licorice, grapes and banana.
Dry aftertaste with a mild bitterness.
Medium towards full body with appropriate carbonation of tiny bubbles. Alcohol of 7.5% is completely absent.
Interesting take on a Dubbel with a Stout accent. I question whether this is a sipper, once it is fairly drinkable. All flavors are very balanced. I kept increasing the score while I slowly drank it. Bell’s…

Pours a dark brown with a fluffy slighty tan head of foam.

Notes of berries, tobacco, leather, and other dark fruits.

Dark fruit takes the mainstage here with roasty notes on the finish.

Overall, not something I'd seek out again, but an interesting style and brew nonetheless.

Appearance: I did not expect it to be so dark…barely some ruby edges when held to the light; thin khaki head that leaves lacing

Aroma: yeast; malt; chocolate; banana and maybe some other fruits; a bit roasty; some coffee notes in there

Taste: a nice sweetness throughout; banana, cherry, and maybe some other fruits come to the front; moves into yeasty/bready/malty flavors; maybe a little spice in there too; finishes with some dark chocolate notes, a hint of coffee, and a bit roasty; slightly dry aftertaste, and bitter like you just had some really good dark chocolate

Mouthfeel: thick with a really nice creaminess to it; great carbonation; a mouth-coater; smooth and drinkable

Overall Impression: a very solid beer, with a lot going on; it smells absolutely wonderful; an interesting take on the style; I dig the aftertaste a lot

Look- pours cola brown with a thin ring of head

Aroma- coffee, char, brown sugar and a hint of banana

This beer taste likes pennies, I could hardly finish it. Its so gross, I drank it while eating something else and all I could taste was this metallic taste, what are they brewing it in? The after taste tastes like I'm drinking grinded up pennies.

Quite outstanding nose similar to that of an Olde Ale coupled with those of a mild stout. Rich dark fruit (prune, raisin) over a base that is slightly sweet. Underneath is a light char and even lighter note of chocolate.

Heavy medium body with a texture that is extremely smooth and hints at being creamy. The carbonation / body balance is adequate and soft, thus adding to the mouthfeel. Effervescence is present and tickles the tongue from time to time but comes across as a bit under carbonated.

The flavor profile is outstanding and rather unique. A base sweetness remains throughout. Prune arrives mid-palate and is the first flavor to separate, then quickly morphs to raisin. Chocolate makes a brief subtle appearance, then the sweetness fades allowing the char and roast to emerge. Clove makes an appearance near the end and lingers after the finish along with a note of bitter bakers chocolate.

Pours a deep brown with a small tan head and minimal lacing.

The smell is loaded with raisin and other dark fruits.

The taste has the dark fruit but it's more subtle and has nice roasted malts also.

The mouthfeel is medium thick with medium carbonation and a slightly thick, lingering finish.

Overall a nice easy to drink Belgian although the flavors are bit muted.

Nealy black, opaque, prune juice appearance. Almost no head. I expected big dark fruit aroma, but I'd have to say little dark fruit aroma. Slightly phenolic. Low stout like roastiness. The combination of phenolics and roast gives the slight impression of smoked beer. Very thick mouth feel, milk shake quality -- not unwelcome, but uncharacteristic for a Belgian inspired beer. This is a tough beer to rate. In a lot of ways it fell short of the expectation of a big flavorful Belgian beer, being somewhat subtle when I was looking for intense, and then the mouthfeel seeming completing out of alignment with expectations. But if I put my expectations aside, what do I think? It is a big enough beer, maybe the kind you drink only one or two of at a time. As I sit and dwell upon it's virtues, the subtleties open up enough to for me to register appreciation. I think I am glad I bought I six pack. This is a beer to ponde.

L- The beer pours thin and black with a two finger tan head. Lacing is light and retreats to join the beer in the glass.
S-The nose is an odd mix of dark fruit and smoke. Not bad, just weird. In the end the smoke wins out.
T- Unfortunately the differing flavor aspects just kind of meld into a muddled mess. There is underlying dark fruit but it is mostly overwhelmed by the smoke and roasted malt.
F- Mouthfeel overall is medium. Carbonation is light.
O- This beer is certainly an interesting style mashup. Unfortunately I tend to be sensitive to smokey flavors and it just kind of overwhelmed the dark fruit. If you like smokey beers or are at least less sensitive to it you may want to give it a shot.

Hell Hath No Fury has a thin, beige head, a very dark brown (nearly black) appearance, with brown highlights, at the edges, and no glass lacing. The aroma is of deep, rich, dark-roasted, sweet malt, some licorice, coffee, and chocolate. Taste is of all those elements, with cream and low bitterness. Mouthfeel is high medium and silky, and Hell Hath No Fury finishes medium sweet to dry.

Poured into a St. Bernardus chalice.

Looks of ruby burnt raisins, khaki ring around the collar, no lacing.

Mouthfeel is medium to heavy, dry.

Overall, lots of interesting flavors in the dark fruit realm.

LOOKS: Dark brown, with a finger of slowly receding tan head that leaves a mild lacing behind.
AROMA: Mild chocolate and coffee, cloves, dark dried fruit; the Belgian part comes through and blends nicely with all the other qualities.
TASTE: This reminds me, as they say on the label, of some stouts, with the coffee and chocolate notes, where I sometimes get a jammy/red wine vibe, probably from the yeast used. Only in this case it is more of the Belgian dark dried fruit and a bit of clove. Everything is blended well, here. Slight bit of char, but even R.J.T. probably won't mind this amount.
FEEL: Average carbonation, dry, medium body.
OVERALL: Subtle, because nothing is clobbering you over the head, yet, all of the pieces of the puzzle get to speak. Nice, and interesting brew, Bell's!

The beer pours out into my Duvel tulip a deep dark brown, almost black, color with 1 1/2" head of dark tan foam that recedes slowly to leave a 1/2" ring on the glass and a thin cap of foam on the surface of the liquid. Sipping.

The aromas include mostly the coffee and dark chocolate from the dark malts. The Belgian yeasts, some dark fruit and a hint of clove are just barely noticeable in the background.

The flavors are a well integrated blend of some dark chocolate sweetness.along with a noticeable coffee flavor. In addition the Belgian yeast puts in a quick early appearance but then recedes to the background and some dark fruits and a hint of clove remain in the background.

The mouth feel is on the heavy side of medium bodied with some persistent smooth, soft carbonation. The finish begins with the fading of the coffee and chocolate followed by the fruits and light clove as there is a gradual emergence of a slightly burnt, earthy character that persists through a long slow fade to a dry finish.,

Overall I've enjoyed this beer and expect to be trying another. If you are looking to try a beer that is both a stout and a dubbel (or vice versa) this one is worth sampling.

Overall- An easy sipping dubbel with lots of flavors. This on exemplifies the style. Great flavor profile. No fury, but you just might feel a slight burn in your belly!

This beer pours absolutely beautifully: dark reddish brown writhing a rich foamy light brown head and good lacing. Light smell but mostly of chocolate. Taste is an unusual mix of dubbel fruitiness and the chocolate and coffee notes of a porter. A fun beer!

Poured from a single serve into a tulip....

Pours rather dark for a dubbel, but has a nice head with outstanding lacing. On the nose, Dark fruits (raisin, prune, and date) meld well with uniquely-strong herbal notes (anise especially) but the classic Belgian yeast notes are lacking. This carries over to the palate, where there is a wealth of candi sugar and fruit, and some interesting stout-like toasted notes, but a lack of balance from the expected (but not really present) true malts and yeast. It seems boozier than it really is, with some noticeable burn. The finish is excellent, however. Well-carbonated, but not overly so, it has a nice crisp and remarkably light mouthfeel. Overall, this is an interesting brew, but it isn't really a dubbel.