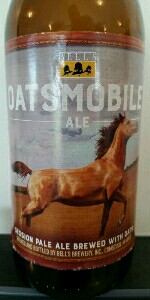 This hop-forward session American Pale Ale uses a blend of classic and modern Pacific Northwest hops, including Mosaic, Ekuanot™ (formerly Equinox) and Glacier, for a pungent blend of peach, mango and tropical aromas. The signature ingredient - oats - are what makes Oatsmobile Ale stand apart, and gives it a body that you don’t see in most other sessionable pale ales.

Reviewed by feloniousmonk from Minnesota

Bell's Oatsmobile. Final bottle from a six-pack, the other 5 long gone. Been putting this off. Far too long. Session Pale Ale brewed with oats. Brewed and bottled by Bell's Brewery, Comstock, MI.

In the mouth: Smooth, malty, toasty and tasty. Citrus-y hop flavors continue on the palate, easy-drinker, nice and lean and clean. Many pleasures to be had in this one. I'll have another, thanks. (Oh, wait. Oops.)

S: Dank, grassy, and citrus rind. A touch of skunked aroma as well over the cracker malts.

T: Grassy and citrus rind hops. Brassy bready malts, and a minerally hard water. Some noble hop vegetal and herbal as well. I swear there’s still a bit of skunk here too. Mildly bitter in the hang.

M: Average heft to the body. Carbonation sensation on the low side of average. Low alcohol presence.

O: Really not very good. I’m not certain if this bottle is "off", but it's been refrigerated and not exposed to light since I’ve had it. And I don’t think it’s old. Very disappointing, though it stops short of seeming undrinkable.

A violent pour yielded a huge white head; a curtain of frothy lace.

Creamy with faint citrus notes, this is interesting but ultimately more of a curio than a good beer. One's enough forever, but in a pinch it won't offend anyone.

Rated by parose from Michigan

3.64/5  rDev -2.2%
look: 4 | smell: 3.75 | taste: 3.5 | feel: 4 | overall: 3.5
I love that Larry Bell is deigning to CAN more of his beers in support of The CANQuest (tm)! I have been a fan ever since he first began distro in PA almost twenty (20) years ago & I met him for the first time at the State College Brew Expo. He brought embroidered cloth patches at my request & gave a great lecture, which I listened to with rapt attention. I was in attendance at the GTMW when Larry Bell's Circus got a little over the top & he, as the Ringmaster, began lightly whipping the Tattooed Lady (one of his employees in a bikini who was festooned with rub-on tattoos) as she scampered around on all fours. It was when she assumed a rampant position atop an overturned metal tub, ala a lion or tiger, that the organizers finally reached critical mass & put a stop to it. Ha! My next semi-encounter was a late-night break-in at the General Store during my visit to the Eccentric Café to garner more patches. Shhh.

From the CAN: "Aromatic. Approachable. Unique. Intriguing, Happy-Go-Lucky. Full-Bodied. And We're Not Just Talking About The Horse." Ha!

It's CAN Crack!in' Time (with apologies to Ben Grimm)! Fresh CAN + big glass = inverted Glug. My ex-Old Lady kinda made me swear off of an inverted Glug because she was a) scandalized & b) she was afraid of the potential for a big mess. Eh. I CAN do it every once in a while - just not at the end of a long day of drinking nor when a large enough glass is not available. In this instCANce, it rose up with a mighty three-plus fingers of dense, foamy, rocky, bone-white head with moderate retention that left loads of lacing in its wake. Color was a gorgeous Golden-Amber (SRM = > 5, < 7) with NE-quality clarity, enticing The Gelt Gang of Mammon, Croesus & Midas to drop by for a taste. Nose smelled like apricot scones - biscuit malt meets fruity hops! Mmm. Mouthfeel was medium, but really slick & silky on the tongue. Hello, oats! The taste was peaches, apricots, pears and biscuits or scones. Better yet, biscotti from Enrico's in Pixburgh's Strip District! Finish was dry, more biscuity than fruity, although I still got plenty of fruit flavors remaining well past the swallow. The problem occurs when I have to rate to style. The hallmark of an APA is SNPA & this was not that. It lacked bitterness, for one thing, plus the low ABV left me unfulfilled. Sorry.

Reviewed by ribby from Michigan

3.9/5  rDev +4.8%
look: 4 | smell: 4 | taste: 3.75 | feel: 4 | overall: 4
I am always interested in high taste, lower alcohol beers. Bell's has a lot of interesting possibilities. Third coast is almost 5%, Oarsman is a bit on the sour side at 4%, and this is a 4.3% pale ale. Lager of the Lakes might join these three. A head to head with Third coast would be a good idea. The color is a slightly cloudy amber, on the yellowish side. This is on the hoppy side, of a fresh, citrusy character. This also has a decent creamy head. I would probably bumped the rating up a bit if it was summer when I was writing this review. Still, of the these three this is the number one choice for me. I will probably rotate these three this summer.

I retasted vs New Holland Xtra Time and Founder's Solid Gold. This is the best by a hair over Xtra Time. For a sub 4.5 summer session, this will be hard to beat. I haven't seen Oarsman yet this year...