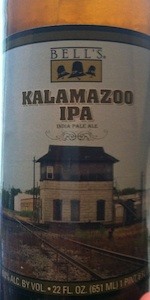 The smell was leafy and soapy. Amarillo hops??

The taste was piney with only hints of sweetness. Gentle bitterness. A solid, simple IPA. Very drinkable.

The mouthfeel was medium in body with fine carbonation.

Ahhh, the much maligned Kalamazoo IPA. This pours a amber tan color with a floral, grapefruity aroma. There’s a delicately hopped floral and citrusy note on the flavor as well. It’s an easy drinker, with perhaps more of a “west coast” feel than their flagship Two Hearted.

Pours clear gold with minimal head. Aroma is lemon, grapefruit, orange, pine. Taste is aggresively grapefruit tinged with some pine/tart hop flavor. If you like grapefruit, this is your beer. A bit lighter than expected but not bad.

With a sensible and somber approach, the roots of American microbrewed IPAs are well exemplified in Bell's Kalamazoo IPA. Its a distant recipe to what common IPAs are all about as it shares a more even-keel balance of malt and hops along with threads of English inspiration mixed within.

As its murky golden and amber color awaits, the ale springs to action with a cream and somewhat dense pour. As the beer separates from foam its ivory column of froth ensues. Long lasting in its retention, the ale trails with intricate lacing designs left behind on the glass.

Its moderate aromas are lead by unmistakable citrus hop character. But there's also an abundance of leaf, grass, and spicy tones to ride along side. Supporting caramel, bread crust and biscuit-type sweetness call to action and nearly rival the strength of hops. Its overall earthen character strikes the olfactory senses with elements of sassafras and rye.

To taste, its strong malt backbone is bold with caramel-dipped breads, shortcake and fresh baking bread. Its crusted and light nutty tone is hard for the hops to overcome as the middle palate approaches quickly. Though sharp and spicy with pink grapefruit, orange zest and a hint of lemon, there's also the broad wood and herb flavor of tea leaves, fragrant grasses and lemony wood shavings. Lightly piney to finish, the taste is a melange of English sweetness and herbal hoppiness along with bright American tones of citrus and caramel.

Its body is slighlty more robust than the average IPA because of the rich bready texture and its infused carbonation. Once the bubbled dissolve and the sweetness fades, the hop character dries the ale wonderfully but does also leave behind a dry malt structure to support the hops broad woody bitterness and acute citrus acidity.

As the American microbrewery craze has changed the landscape of IPAs for the better, I rather enjoy revisiting tastes like these that still remember the origins of IPAs as done in England, but with the more rugged American grains and hops that were, then, too aggressive. My, how times have changed!

Smells of biscuit and light pine. More like what I associate with a lightly hopped amber than an IPA.

The cracker found in the nose dominates the flavor as well followed by muted orange peel, floral, bread and a dash of pepper.

All around lackluster. I'm surprised that the brewery that has delighted hopheads with Two Hearted, Oracle and Hopslam would brew and then release something so subpar. A brewery only release that I tried this one time but will pass in the future.

a nice clean copper pour, lots of visible carbonation, 2 fingers of fluffy white head leaving behind great amounts of lacing. smells of piney hops, grassy, herbal, and grapefruit notes with a hint of caramel. lots of bitterness up front with a malty bready backbone.. bitterness wears off comes back as citrusy and then finishes with a lingering bitterness. medium body with moderate carbonation.. creamy mouthfeel. this is a really delicious ipa, definitely does not disappoint. feels and looks like hopslam, but is a completely different beer. side note - this is the first bell's beer i get in a bomber!

Taste: some light fruitiness up front. citrus mainly. followed by a mixture of crystal malts and spicy hops. malts seem more powerful as bitterness is low.

Mouthfeel: fairly light and crisp. low bitterness. quite sticky though

Overall: This ipa is a let down from bell's for me. i was excited to see something new in the general store when i stopped by but this just straight doesn't do it for me. I don't think i can handle the crystal malts in ales.

On-tap at the Cafe, drank from a pint glass...Pours a very clear light copper. An off white head, good retention and lacing. Looks good if not for the body being a touch light...The aroma is dead, a little citrus but that's its, disappointing... The taste is terrible, light toffee with stale hops. Had this right after the IRA, not even in the same galaxy. This is bad and needs to be passed on.

Reviewed on 6/24/2010. On tap at Eccentric Cafe. Pours a clear orange brown with a small white head. Aroma of piney hops, citrus, and caramel malt. Flavor of caramel (tons of crystal malt), bitter hops, and piney and grassy hops. Just ok -- I wasn't particularly a fan of the hop character and the malt base was pretty weak as well. Overall, a disappointing IPA.