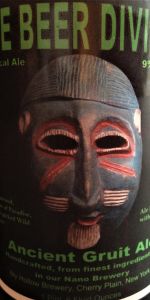 L: Pours a cloudy copper brown with an inch of tan head. It lingers and never fully recedes. It's quite thick.

T: Follows the nose. A good amount of tartness. A little earthy, some spice. Very refreshing.

O: I have been looking forward to trying something like this for a long time. How true is it to an ancient gruit? I don't know. But still it was nice to try something truly different for a change. I'd like to try some others like this and also have another one of these.

A: mahogany orange-brown body - opaque - produced a finger of tan foam that slimmed quickly into a slender collar

T: tart, like sour berry or black cherry, hints of something herbal and earthy, tropical and tart fruits and woody herbs compete for attention

O: reminiscent of the sahti in the lack of hops and presentation of herbal flavors instead - I liked the beer - interesting and drinkable.

Discovered a nice display of 'The Beer Diviner' brews at a bev store in Kinderhook, NY while visiting the inlaws. The selection was given prominent shelf space, but so new that the store workers hadn't even tried any of the beers yet! I can't recall the other beers--a stout? a brown ale?--but the 'Ancient Gruit Ale' caught my attention. A gruit has a very different taste experience than a normal beer, so I tried to judge it as it was rather than a regular beer.

A: It poured a reddish hay, a darker golden, with a translucent cloudiness. There was no head, and thus no lacing--I'm not certain, as it's been a few years since I've gone the gruit route, but I think this is usual. The color was inviting enough. 3.0

S: Upon opening, there was a burst of spicy herbs that dissipated. After pour, the beer had a general tartness, but you could pick up the malty sweetness if you strained. Not much to speak of. 2.0

T: Had a very inviting sweet herbiness up front, with strong herbal notes overtaking the hops with notes of tart cherry and caramel. Left an earthy, salty, hay-ish lingering aftertaste, that eventually turned a bit bitter/sour--all very pleasant. It started off bright, and ended woody and earthy. The bottle notes that the beer is flavored with "wormwood, grains of paradise, and hand-picked wild yarrow," and you can taste the woodsiness of the grains of p and the bitterness of the wormwood, so with the herbiness of the yarrow I suppose you get a bit of all three flavors. It amounts to a very different flavor, but refreshing and tasty. 4.0

M: Little carbonation, but I prefer beers not to be overly fizzy; I think this suits the taste quite well. The beer is slightly cloudy, and you taste that chewy body, which is in keeping with the herbal woodsiness of the flavors. Also, the gruit is pleasant and warming but the 9% is very subtle and you don't taste it. 3.5

O: What a journey. Not a beer for a lot of folks, but I think the flavors come together well. Overall, the gruit was refreshing and very tasty. I was happy with the overpowered hop presence, as the beer was very easy to drink. Kept my mouth watering, and I had no problem finishing the bottle. The wormwood did not make me hallucinate or jump out a window. 3.75

Ancient Gruit Ale from The Beer Diviner
Beer rating: 85 out of 100 with 17 ratings