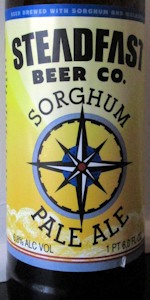 Look is a deep orange and very opaque. My brother in law drinks gluten free so I got some of these. Pleasantly surprised. Citrusy hops in aroma and taste. Sourgum and molasses brings score down. A little sticky(maybe placebo effect).

Either way I would drink again but would stick my normal iPAs.

I had picked this up during one of my forays to Total Wine & More in VA, either in Norfolk or in one of the DC suburbs. I had a colleague who is gluten-free and I told her that I would keep my eye out for G-F beer options and report back to her on my findings. In the interim, I retired from that job and I still have the beers awaiting review.

From the Bottle: "Gluten-Free Beer Brewed with Sorghum and Molasses"; "Steadfast Beer, Born in America."; "Celiac friendly"; "Flavorful, aromatic, satisfying ... things you're probably not used to saying about the Gluten-Free beer in your fridge. Think again! Steadfast Sorghum Pale Ale is our Gluten-Free take on a quintessential American beer style. Made with sorghum, molasses, and an aggressive hop profile, this ale lives where quality and flavor intersect. THANK YOU for your support - you have ours. Together, we're STEADFAST!"

Having Pop!ped the cap, it was time for an aggro pour, resulting in two-plus fingers of foamy, tawny head with moderate retention. Interestingly, it left some lacing behind as it fell. Color was Deep Amber/Light Copper to Copper (SRM = > 13, < 17) with NE-plus quality clarity. Nose had the unmistakable apple vinegar scent of sorghum, but this time with a grassy mintiness. Mouthfeel was medium. The taste had a really welcome bitterness that helped to mask the frankly unpleasant taste of sorghum. Now, was it as hoppy as an AIPA? I did not think so and if it were up to me, I would reclassify it as an APA, since it is quite akin to SNPA. Regardless of style, this was probably the first one of these that I have encountered that might give the Widmer Brothers Omission offerings a run for their money. I realize that I am not the intended audience for these beers, but I can still form an opinion about them. The finish was dry, bitter, and with a lingering aftertaste of an admixture of apple vinegar, grass, hay and a little mintiness. A belch might not be terribly pleasant following this one.

A: The beer is crystal clear amber in color and has a light amount of visible carbonation. It poured with a quarter finger high off white head that quickly died down, leaving lacing on the surface and a collar around the edge of the glass.
S: Light to moderate aromas of herbal hops are present in the nose along with some strong medicinal notes and hints of pine resin.
T: The taste is similar to the smell, except that the medicinal flavors seem to be stronger and linger through the aftertaste. There is a light amount of bitterness from the hops and slight hints of molasses.
M: It feels a bit shy of being medium-bodied on the palate and has a moderate amount of carbonation with a slight amount of crispness.
O: Of all the gluten free beers I've tried, this one definitely had the boldest taste, although the medicinal flavors might take some getting used to. If I was restricted to drinking only gluten free beers, I might give this one a shot, hoping that it would grow upon me.

Yet another beer that I picked up at Top Hops last week. I never had anything that was gluten-free before so I wanted to see if it would differ than what I was accustomed to. Sure enough, it was as the molasses and sorghum stood out a bit more than I anticipated. While this was not as hoppy as other IPA's that I've enjoyed in the past, this was pretty enjoyable and would be a good choice for someone who would not be able to process a gluten product.

The pour to this was a light copper with a head that didn't last very long and hardly any lacing to be seen. It was nearly clear and there was enough carbonation here in the taste, if not by sight. As for the aroma, there was some molasses and piney hops present with some cinnamon and allspice to back it up in the taste. That faded away to a very dry, earthy mouthfeel that lingered for a while in the aftertaste. Not a strong bitterness here but what was felt held its own for a while as the carbonation slowly scrubbed everything away until the next sip.

This was somewhat strong tasting in terms of alcohol, even though the taste of booze was not as high as I was led to believe. A little more rye in the mouthfeel would have made this more full and given it a better body to go along with the slightly grainy texture that this beer had. I could tell that this wasn't a typical beer but the sorghum didn't stand out enough to make this different from other beers I've had. This is worth a go once just to see what else is out there, even though I probably won't give this a go again for quite some time.

A beautiful dark gold and amber body graced with a thick, chunky head; rings clinging to the glass after each sip. Heady sweetness to the nose with a soft hint of spice; caramel, toffee, allspice; slight floral hops. Solid sweet and spicy flavor; peppery; a moderate bitterness ends the taste; a hint of alcohol heat. Medium bodied; slightly fizzy feel that smooths out as the mouthful lingers on the palate.

A very good, robust gluten-free beer. Well-rounded and wonderfully tasty. Not a classic IPA styling yet it stands right next to some of the best offerings of any IPA/APA out there. A must try...

Sorghum Pale Ale 1 pint 6.0 fluid ounces poured into a pint glass.
A: Nice amber color. White head about a fingers worth that laces on edge of glass. Clear appearance with no sediment/particles.
S: Nice hops smell (citrus & pine). Also, dominant is the smell of sorghum. Slight smell of molasses
T: The initial taste was malty & sweet from the molasses. During the middle the hops and sorghum both came through. The hops did linger during the finish.
M: Good carbonation, light mouthfeel
O: I really enjoyed this beer. The generous use of hops nicely balance with the sorghum. I would buy again and will recommend to friends who are looking for gluten-free beer. Cheers


Sorghum Pale Ale from Steadfast Beer Co.
Beer rating: 81 out of 100 with 25 ratings