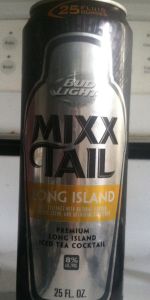 Aroma and flavor is alcoholic tea along with sweetness. Basically a beer version of a Long Island ice tea, was surprisingly pretty decent for what it is.

Clear light tea color. No lasting head.
Smell is spicy.
Taste is sweet with a hint of tequila and spices. Very sweet. I noticed in the ingredients that it uses high fructose corn syrup (no surprise) and sucralose (Splenda). They could have left out the sucralose and I would have enjoyed it more. It seems like every product that uses sucralose uses too much and makes the product more sweet than necessary.
Mouthfeel is light with good carbonation. Finish is sweet.
Overall if this is a malt liquor it is a very pleasant one.

Sampled on 3/10/16 and split with a good friend. Comes in a 11.5 ounce aluminum 'can' bottle that was chilled down to 36 degrees F in my beer cooler. Poured in to a vintage "Budweiser' handled-glass stein. 8% ABV. No date on the can.

Pours like a cola with really no head or lacing to speak of. Aroma as well as the taste is like a cheap version of the famous "Long Island Iced tea" but without the higher alcohol content of course. On the sweet side as would be expected. If you want a cheaper buzz with some sweetness then this might hit the spot for you. Was it horrible? No. What is a fantastic drink? And again NO. It is what it is but I would try it again on a summers day if there wasn't something else around that I like better.

I am having an A-B/InBev kind of day and since this one (and its two brethren) was already chilled, I decided to CANtinue on the course, rather than veering into other territory. I bought this 25-Fl. Oz. monster when it was first released, but then there was some CANtroversy about its inclusion on this site and it fell into the backlog as a result. I have seen it in screw-top CANs & standard 12-Fl. Oz CANs, but as Gunny Ermey would tell me or you: "You bought it, you drink it, you little a**hole!"

The ginormous Crack! shook Chez Woody to its foundations! This isn't a CAN, it's a drum! 55-GL later & I'll report back. I waved the crane around and secured the CANvas strap to the bottom of the drum before signaling the operator to begin to lift it off of the ground. Once it had sufficient height, I motioned for him to swing it around to the awaiting glass vessel for immediate transfer. The Glug happened so quickly that neither of us were prepared for it and so he set it back on the deck. I had a brief finger of really fizzy, tawny head that dissipated so quickly that I was unsure that it had ever existed. Color was solidly Amber (SRM = > 7, < 9) with NE-plus quality clarity, enabling me to see into the future. Nose smelled strongly of alcohol. I think that the last time that I drank a Long Island Iced Tea was thirty-plus years ago. Standard ingredients include gin, tequila, vodka, rum and triple sec with various mixers. I'll grant you, this had a citrusy orangish/lemon-lime scent, but the rest just smelled like alcohol. Phew! Mouthfeel was thin & watery. The taste was highly citrusy, more lemon-lime than orange, although there was some of that flavor, also. The drum sat, staring at me like a silent CANolith, daring me to drink it all. One of the basic tenets of The CANQuest (tm) is that it must all be CANsumed to count, so a drain pour was out of the question. Likewise, an alley afternoon was not happening due to extreme cold weather. I live in an up-and-coming area of town & I have an apartment building next door whose inhabitants will join me for libations in the alley during the summer. We sit in lawn chairs, drink 40s & drums of this kind of thing & while away the hours. This was not an option today, so I was on my own. It was not unpleasant, like a drum of a Minhas/Axe Head beer (tm) would be, but at 8% ABV, it was testing my mettle. Warming (!), it began to take on a pronounced orange-vanilla flavor, like a Creamsicle/Dreamsicle. OMFG! Jesus, this would be like a liquid roofie for some young, uninitiated woman! There is NO way that I would ever put this in a cooler, offer one to somebody, hook up & try to defend my actions later. An unqualified, enthusiastic "Yes!"? Hell, I CAN barely type at this point. Phew. This is some bad juju. I recognize that they have signifiCANtly reduced the serving size since I scored mine, but this (probably) remains rocket fuel. It'll get you where you're going & in one quick hurry, but you may not like it when you get there! Finish was surprisingly dry, indicative of what hell the yeast must have gone through to amp it up like this. I would say that it should come with a warning, but if you CAN't intuit the idea behind it from the labeling and the verbiage, then caveat emptor. Also, my heart is racing from all of the sugar. I feel like I should be smoking a cheroot and studying today's Racing Form outside of the OTB with all of the other plaid-suited yahoos. This is bad news, man. Bad news. Minhas is awful, but this disguises itself like a wolf among the sheep. It makes me sad and regretful suddenly. I need (at least) a day before I tackle another Mixx Tail. 8=(

Poured from 11.5-ounce aluminum bottle into a stein. Clear, golden straw color with head that dissipates almost immediately after pouring. Not much on the aroma. Sweet, with a bit of cola on the palate and a lingering, tongue-coating, syrupy finish. A quite efficient and palatable alcohol delivery system.

A: When held up to a light, the beer is crystal clear yellow in color (but is more of a tea-like hue when viewed from afar) and has a light amount of visible carbonation. It poured with a short white head that completely faded away very quickly.
S: The smell seems artificial and has some aromas resembling a Long Island Ice Tea, most notably tequila with some notes of rum.
T: The taste follows the smell, but has added bits of lime juice and some hints of fusel alcohol towards the finish. It becomes sweeter as it warms up.
M: It feels a bit more than light-bodied on the palate and has a moderate amount of carbonation.
O: This beer isn't horrible, but smelled and tasted a little gimmicky from the start, even more so as it began to warm up and the sweetness started to come through. It would be best served chilled on ice.


Well since I drank one out of this sure to be shit fest I may as well have the others.

Look - Pours a moderate yellow with a tint of orange and no present head. Carbonation appears to be high and the lack of a head means lacing isn't even in the discussion. Can is pretty cool, so I'll up this one a smidge. 3.25.

Smell - To nobodies shock, it smells like a mixture of fusel alcohol minus the grapes with a hit of iced tea. Alright, so far it has done its job. 3.

Taste - Well it surprisingly tastes like a well made long island iced tea. You get the noticeable hit of alcohol, with a large fresh iced tea smack in the face. I really can't complain. 3.75.

Feel - Light bodied with enough cabonation to blow the top off of Krakatoa. As is usual of the type. 3.

Overall - I could see why people want to hate it. Since it is a bud product after all. But remember, this is made for people who want a cheap double eight percenter. So, instead of hating it for what it isn't and what it was never meant to be, I shall like it for what it is. I'd say it hit its mark as for what it set out to do. Now my code of beer honor prevents an exceptionally high rating, but for the style, this was exceptional and I could ( and probably will in the future ) pick these up for a hot day get together and down them. 3.75

Bud Light Mixxtail Long Island from Anheuser-Busch
Beer rating: 64 out of 100 with 25 ratings