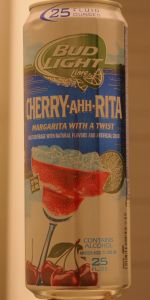 Appearance: Glowing pinkish-red in color, a bit brighter than pink grapefruit juice, with a moderate, coarse pink head, which vanishes in a twinkling. No lacing is apparent.

Aroma: Aggressive aroma of cherries and lime, it most reminds me of Hawaiian Punch, although with a rather prominent, vodka-like alcohol presence.

Taste Begins with a wave of cherry, and faintly bitter lime. A wave of sweetness, alcohol, and otherwise, soon follows. Notably, the ABV of 8% is more prominent, in both taste and warming, than other of the Bud Lite Ritas that I have tried. AS the taste progresses, the cherry, in particular, and the lime, to a lesser extent, dominate, with a backdrop of alcohol. Finishes with a lingering note of cherries and a hint of bitter lime.

Mouth feel: Thin, with a bit of sharp carbonation.

Drinkability/notes: Rather like Hawaiian Punch, with a shot of vodka, and a little carbonation. Easy enough to drink, surely a cheap buzz on a blazing hot summer day. Perhaps late December is not an ideal time to try this. Still, its alright, though perhaps not quite as good as some of the other Ritas.

Presentation: Packaged in a twenty-four ounce aluminum can, served in a South American-style Pilsener glass..

Welcome to my first as a part of Happy New Is This Beer? Sunday (Week 650). I had purchased this big boy a while back, but when I initially went to review it, an approved pic did not exist. That is a no-no for The CANQuest (tm), so I took the pic, resized it, submitted it & summarily put the CAN in the queue, awaiting the appropriate moment, like today.

From the CAN: "Margarita with a Twist"; "Malt Beverage with Natural Flavors and Artificial Color"; "Try It Over Ice!"

This came in one of those mighty 25-fl. oz. tallboy CANs, which are unique in that they seem to fight me on the Crack! Upon acCANplishing this feat of strength that it took to open the dang thing, the resulting noise was like a sonic boom. An inverted Glug was out of the question since a crane was required to lever the cylinder upwards & tilt it into a pouring position. I watched in fascination as a brief finger of pink, cotton CANdy-colored head formed & quickly fizzled away. Aww. The color was a pretty pinkish-red, Magenta (SRM = N/A) with NE-quality clarity, but not dark enough to call it "maroon". Nose smelled super-sweet, causing me to snap my head up & actually look at the CAN's label. Those were Bing or Black Cherries which were depicted, each known for being rather sweet, not tart or sour. Mouthfeel was thin and watery, but very fizzy & carbonated, very evocative of pop. The taste was of sweet cherries, but in an artificial way. I kept flashing on Luden's or Smith Brothers' cough drops as I drank through this ... beer?

I have read & re-read the " How to Add Beers on BeerAdvocate" section of the site & I keep coming back to "Not Allowed[:] Adding the following will result in the listing and any related content to be deleted without warning[:] Anything that's not a beer. Examples: cider, meads, sakes, unfermented beverages.[;] Beers that were doctored post-production. Examples: blended/infused beers." I suppose that this was fermented at some stage in its production, but was this NOT infused later? It is really a non sequitur, but a head-scratcher all the same.

Finish was sweet, sugary & simply another example of an alcopop, designed for an audience which did not include me. Oh well.

Poured from a 25 oz. can. Has a light violet color with a 1/2 inch head. Smell is of maraschino cherries. Taste is sweet, cherries, touches of cough drops. Feels medium/light bodied in the mouth and overall, isn't bad, but nothing special. It drinks nothing like a malt liquor, fruit/vegetable beer would be more appropriate.

A: Pours a clear dark pinkish purple in color with moderate amounts of active visible carbonation rising from the bottom of the glass and moderate dark garnet red highlights. The beer has a finger tall fizzy pink head that quickly reduces to a small patch of very thin film and a very thin ring at the edges of the glass. Minimal amounts of lacing are observed.

S: Moderate aromas of sweet + tart artificial cherry (kind of reminds me of cough syrup or Luden's Cough Drops) with a light aroma of fusel alcohol.

T: Upfront there is a moderate to strong flavor of sweet + tart artificial cherry (kind of reminds me of cough syrup or Luden's Cough Drops), though even sweeter. There are light to moderate flavors of fusel alcohol in the finish which lingers for a little while.

M: Light bodied with moderate amounts of carbonation. Light amounts of alcohol warming in the finish.

O: Overall this is a beer for people that do not like the taste or smell of beer, the fact that it is made from Bud Light Lime is almost completely hidden. Too sweet for my taste and a little too reminiscent of cough syrup from my childhood but it is not offensive.

Bud Light Lime Cherry-Ahh -Rita brewed by Anheuser-Busch, with an ABV of 8.0%. This brew pours out a nice reddish purple color with a small pink head. The head to this brew goes away fast. The smell is sweet with cherry an alcohol. No hops,malts or grains in the smell of this brew. Bud Light Lime Cherry-Ahh-Rita is not your typical beer. This brew has an high ABV with lots of sugars. However the smell is really inviting, however it my put you in the mind set of cough syrup. Now for the taste of this brew, it is sweet and sour, with cherries. I will say this, it is different from most brews on the market today. It puts you in the mind set of cherry soda/pop with alcohol. It is a real refreshing ,drinking brew. You really can't pick up on the 8.00% ABV in this brew. I would buy this brew when, I'm in the mood for something different than your typical beer. The mouth feel is bold with flavors. Anheuser-Busch , did a nice job with this one. Overall I'm giving Bud Light Lime Cherry-Ahh Rita a soild 4 out 5. I would buy this brew again.
Some would not considered this to be beer, however is a smooth brew to drink.

Cloudy maroon colored beverage with a momentary pink colored head. Poured over ice like they suggest and it does cut the sweetness.

Starts out sweet cherry soda with some tartness to it. Pretty close to the taste of cherry lifesavers. Fair amount of a bitter note in the after taste. This distinctly tastes like the cherry flavored medicines you get as a kid. Cherry candy covering up something that taste bad. This just doesn't quite cover up the medicine taste.

Overall it is drinkable but not what I would call real tasty. Of all the drinks in the series I like this one the least. I suggests if you try one make a ice cream float out of the raspberry flavored one.

Very enjoyable beverage of its class. Was expecting the grape/picante-flavored margaritas to hit the scene before this one, but nonetheless was excited to find a twelve-pack of this on vacation. Despite its (predictable) excessive sweetness, I'd take that over a medicinal cherry flavor. Just can't understand what they were going for with the can color. It looks very reminiscent of the Cran-Brr-Rita color, so much so I almost walked by it thinking that's what it was. Think the Lime-a-Rita line has officially hit the point where they are going to have to reuse colors, and if they are, they might as well use it for a flavor that's harder to find rather than risk confusing people by having two reds (this and Straw-Ber-Rita).