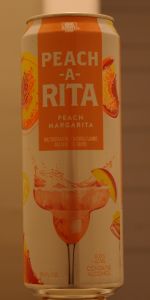 Bud Light Lime Peach-A-Rita brewed by Anheuser-Busch, with an ABV of 8.00%
This American Malt Liquor pours out a pinkish/ reddish color, with a thin head. This brew pours out of a 25oz can into a pint beer glass. There is a small pink head to this brew, but it goes away fast. The smell is sweet with peaches mixed with alcohol. You pick up on little to none on other beer notes, in this brew. Now for the taste, it is really really sweet. Lots of peach notes mixed with mirror grains and malts. It is really hard to pick up on the 8.00% ABV in this brew, it goes down nice an smooth. If you are looking for a fruity flavored brew , you should look this one up. The body of Bud Light Lime Peach-A-Rita is a solid medium. There is nothing overpowering about this brew, if you like sweet peach flavored drinks. This brew would go nice on a warm day or at a party. The mouth feel is Bold, Sweet, Tart, Smooth and Refreshing. Overall I am going to give Bud Light Lime Peach-A-Rita, a solid 3 out of 5. One of more drinkable A-Ritas on the market. I would look this brew up again giving the opportunity to just to change it up from other run if the mill brews on the market. Anheuser-Busch, did a nice job with this sweet brew.

A: The beer is hazy peachy pink in color. It poured with a thin collar of white bubbles around the edge of the glass that rapidly dissipated, completely fading away.
S: Moderate aromas of fruit punch are present in the nose along with hints of peach.
T: The taste follows the smell and resembles a hybrid of fruit punch mixed with artificial peach flavors with a heavy dose of added sugary sweetness. The peach
M: It feels medium-bodied on the palate and has a moderate amount of carbonation.
O: This beer hides its alcohol very well, but is very sweet and seems to have lots of artificial flavors and colorings.

Bought a single 25 ounce can to try for $2.99 last week while at Hy-Vee across the river in Council Bluffs, Iowa. Poured a light pinkish-orange in color with no head to speak of. Aroma wasn't really all that good. The taste is well...umm... horrible! Poured it right down the drain along with the rest in the can. No Bueno!

Poured from the can into a Budweiser pilsner glass.

Quick soda pop fizz is made, making a faint non retention head that dissolves in seconds without a collar. Fairly quiet on carbonation noise when settled, and presents a wild body appearance. The color is a perfect example on the can, a peach orange color, and a pretty good one, it's almost neon like in it's appearance.

Aroma is straight up Del Monte from a can. Fruit cocktail and syrup with quite a bit of sweetness. That seems to be the angle, but it's not really that enjoyable, however a touch of rock salinity makes it a little interesting, but the aroma is a just bit too sweet.

Palate is pretty much like just any other malt-ternative beverage. Sweet sickly alcohol and sticky peach syrup mid flavor palate. Lots of simple sugar like syrup and not much else. Even the salt character isn't coming out as much that was anticipated. While luckily not too booze tasting, it does hit in the gut. Afterwards there is too much Hubba Bubba bubblegum sweetness and flavor, which doesn't even make the beer taste like fruit let alone peaches.

It is interesting to compare this to its Lime brother. That one seemed to have an angle, but this is just straight up booze sugar water.

Welcome to my seCANd as a part of Happy New Is This Beer? Sunday (Week 650). I had purchased this big boy a while back, but when I initially went to review it, an approved pic did not exist. That is a no-no for The CANQuest (tm), so I took the pic, resized it, submitted it & summarily put the CAN in the queue, awaiting the appropriate moment, like today.

From the CAN: "Malt Beverage with Natural Flavors and Artificial Color".

This came in one of those mighty 25-fl. oz. tallboy CANs, which are unique in that they seem to fight me on the Crack! Upon acCANplishing this feat of strength that it took to open the dang thing, the resulting noise was like a sonic boom. An inverted Glug was out of the question since a crane was required to lever the cylinder upwards & tilt it into a pouring position. This action produced a brief, fizzy finger of off-white head that quickly reduced itself to wisps. Color was a cloudy Peachy-Orangish shade (SRM = N/A). The lack of clarity was surprising, IMHO. Nose had an odd mustiness to acCANpony the peachy sweetness. Hmm. Mouthfeel was thin & watery & not even all that well carbonated. The taste was really sweet, very artificial, kind of medicinal & while evocative of peaches in some small way, I am not sure that I would have hit upon it without a hint of some stripe. Phew. Plus, it had a fusel alcohol burn that was not helping its cause in any way. I was not really digging what this one had to offer. It felt like liquid headache for later. The unabating sugary sweetness was just not my bag. Previous reviewers mentioned Gummi Bears while another CANtradicted this by saying that it did not even taste like peach CANdy. I CANnot remember what peach CANdy tastes like, but I hope that it does not = this. Phew. Did Minhas relocate to StL, MO? Is a Cyberinvasion imminent? Finish was hot & dry initially, but once the sugary wave took 'hold, it had a lasting sweetness that was unabating. Oh, man. This is beer? Oof.

This beverage pours an orangish peach color and is cloudy. If it had a head I missed it. It disappeared quickly leaving no lacing.

The smell is peach, lime, and salt.

I have to admit it tastes like a peach margarita. It has the peach and lime aspects at least. I'll admit that I am not a mixed drink person.

It hits the spot on a muggy summer night and the convenience store is your only option.

A little bit better then the others ones, not a big chemical taste. But I could be a little bias because I likr anything peach flavored hahaha cheers.

A: Pours an almost opaque yet still clear pinkish orange soda neon orange in color with moderate amounts of active visible carbonation rising along the edges of the glass and faint pink grapefruit colored highlights. The beer has a half finger tall fizzy peach colored that quickly reduces to a couple of very small patches of very thin film and a very thin ring at the edges of the glass. Minimal amounts of lacing are observed.

S: Moderate aromas of sweet artificial peach and something akin to melted gummy bears with a moderate aroma of fusel alcohol.

T: Moderate to strong flavors of slightly medicinal artificial peach with a moderate flavor of liquid gummy bears. Moderate amounts of fusel alcohol in the finish. Sweet, artificial, and boozy.

O: Not one of my favorite of the XXX-A-Ritas with a much more artificial + sweet flavor than some of the others without hiding the alcohol as well. Won't be picking up another one of these.

Poured from a 25 oz. can. Has a pink color with a 1/2 inch head. Smell is of peaches, sweet. Taste is very sweet, some peaches, medicinal flavors at the finish. Feels light bodied in the mouth and overall, not horrible, but I would have no need to drink this again.

Tastes awful and artificial, sweet medicinal kids vitamins and flat lukewarm sprite. Sadly, it doesn't even taste like peach candy, just gross artificial sugar water. Worse than malort, with the same feelings of immediate regret. A bad idea even if it's free. Thanks Kevin!

Bud Light Lime Peach-A-Rita from Anheuser-Busch
Beer rating: 63 out of 100 with 22 ratings