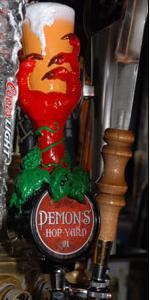 Beer #2 during an Anheuser-Busch Specialty Brewing Group tasting, for originalbeers.com

Clear, bright golden, with copper hues topped with a thick, clinging hop-induced lace that trails the beer as it's consumed. Aroma is dank, resiny and saturated with a pronounced herbal character.

Surprisingly thin-bodied, with a smooth watery, but even, palate. This beer is all about HOP FLAVOR! Though the bitterness is quite mild, your senses are treated to an intense and complex herbal hop assault with hop oils that stick and coat the palate like napalm, providing a rough and raw feel at times. Fruity flavors, sweet malts, and a touch of grain attempt to balance out the hops and add to the beer's overall complexity.

Mitch Steele, one of the Specialty Brewing Group brewers at A-B, mentioned that this beer is 60IBUs, mash-hopped (awesome!), and dry-hopped, using Palisade, Cascade and Columbus hops.

Most impressive! Devil's Hop Yard IPA is a refreshingly unique IPA that proves that an aggressive amount of hops can be used to craft a highly drinkable beer with flavor vs. overloading palates with sloppy bitterness and hyped-up IBUs that humans can't detect anyway.

I wouldn't think twice about choosing it as a session beer. To boot, I hope it wins the originalbeers.com competition, as it was my personal favorite of the tasting and I'd love to see this beer on handles throughout New England.

Update: It won the competition, and was renamed "Demon's Hop Yard IPA"

On tap at the Bell In Hand Tavern - Boston, MA.

Pale copper hue, great head and lacing action here. Thick hop presence in the aroma and flavor. Juicy malt, mild citric ... more peel than juice from the hops. Grapefruit hops. Silk like hop oil on the palate, very delicate. Biscuity maltiness, dry finish. Very interesting to say the least, not as bitter as I thought it was going to be ... loads of hop flavor though.

Heard about it, knew about it, decided to try it.

This is a nice IPA, there I said it.

Pours a copper-gold, topped with a 2 finger pillowy off-white head, leaves sticky rings of lacing with small bits of fringe trying to pull the rings together into webbing.

The aroma was not nice at first, a weird thing with the extreme coldness is it made this beer smell metallic. It needed to warm and when it did it was nice grapefruit and light toasted malt.

Gets more and more grapefruity as it warms, good cracker,light toasted malt backbone, citrus throughtout. That same metallic note dominated when cold, I never picked up on metallic when cold, grapefruit when serving temp before, could just be with this beer.

Medium bodied to the lighter side. Good drinkability, I had a few with some chili and BBQ at a BBQ joint and it matched well.

Almost a throwback to the old Cascade dominated days, it's not the best IPA I've had, and it doesn't compare to the best I've had, but you know what.. there are a lot of craft IPAs that those same statements apply to.. and shhhh this is better than a lot of those.

Draught: Guest tap at Cambridge House: OK, I did go into this with an open mind. I actually didnt mind the Winters Bourbon Ale. This was a different story. The beer pours an absolutely clearamber with a twinge of orange to it. The head was very small, and left no lacing. The aroma was a bit weak. It was mainly grassy hops, with a hint of citrus. The taste is a bit off. There was a bit of a bitterness to it, but it was definitely dumbed down. The malt body was a bit thin. There was a dryness to the aftertaste. There was also a bit of a staleness and harshness to the taste. This had to be part of the profile and not being old, since this was tapped last night for a tasting sponsered by A-B and had never left the refrigerator. I have heard that the production recipe is different from the prototype that they put out earlier. What happened to the days of when AB put out Elk Mountain, which actually was half decent. I definitely wont be buying this one again.

Happy to find something hoppy on tap at the bar at Mt. Snow's base lodge in Vermont, of course I was filled with mixed feeling, when the bartender informed it was a BA product. Another attempt by them to sneak into the micro market and take product share from more small time, beer dedicated brewers. Anyway, this one poured a decent looking darkish shade of amber, minor tan head and just a smidge of lacing noted on my plastic cup. Grainy hop nose got me hopeful, and a few sips revealed this offering to be respectably hopped and drinkable. Hops are heavily of resin and crisply citric, quite biting and dry on the lips and tongue. Not bad, Id pass it by for a true craft beer if given the choice, but this is a respectable and pleasant hoppy ale.

Had this beer at the Cambridge House in Granby, Ct today with some lunch. This beer had a nice clean white head. No real lacing present and the head dissipated rather quickly. It looked like it had a decent head when it came to the table. Bright orangey copper coloration. Smelled floral not a very overpowering hop scent but noticeable. Mild citrus apple smell. Slight hint of grapefruit maybe? Decent mouth feel not as hoppy as I had thought it would taste rather malty for an IPA. Not what I would consider a very pungent IPA offering. Light floral hop aftertaste making it quite drinkable. Not a great examplev of an AIPA but still has some potential. Needs a little more fine tuning. Something was off or missing. More Hop Flavor! It was not my favorite beer but it was drinkable and had a pretty interesting flavor. I don't think I would jump through hoops to get another pint.

Even though I try to support smaller breweries, I decided to give AB's IPA a try. It poured up with a minimal paper white head that died away quickly. The beer is a crystal clear light amber with a healthy dose of carbonation. Not much of a hop character in the nose, hardly detectable.
Tastes more like a pale ale than an IPA, with a watery mouthfeel. Slightly bitter, but very balanced and drinkable. Certaintly won't offend anyone on taste. I see this as sort of a beginners IPA, not one that I'd seek out again, but hey... at least AB gave it a try.

On-tap at East Ave Café in Pawtucket, RI, served in a mug glass.

A: The beer is a light copper color, with a thin off-white head that fades quickly and leaves a thin lace on the glass.

S: The aroma is of caramelized malt & citrus, with only a small amount of hops for the style. Overall the smell is kind of faint.

T: Just like with the smell, the hops flavor isn't very strong in the initial taste considering the style, but when you consider the brewer, it's not a big surprise. The caramelized malt flavor is the more prevalent one and there's some citrus sweetness mixed in. The hops start to come out a little bit more in the after-taste.

D: It's tasty compared to AB's other stuff, but for the style it's lacking, not very filling and it goes down easy enough. As a hophead it's definitely not for me, but it's a decent starter IPA. I was told by the beer manager of the bar where I had this beer that it actually out-sells Bud & Bud Light there.

Pours a clear copper with a medium head and very good lacing.The smell is a little weak with a mild hop citrus aroma. The taste really surprised me. I didn't think Budweiser would make a hoppy beer,but this is hoppy. My only problem with this is that the flavor is all hop bitterness and no citrus hop flavors, or other flavors hops bring. The m/f is light and well balanced making this beer very drinkable and a decent session beer.

On tap at Tobacco Shed Cafe in Windsor, CT

A muted nose presents lots of floral hops, lemon rind and a touch of malt.

Bullish, bitter hop flavors and lackluster supporting malt make a smooth entry with citrus and lemon zest popping in the mid palate. A clean, off-dry finish ties everything together with a touch of pale malt and bitter hops.

On Tap at the Oyster Bar in Keene, NH...The demon hand on tap looked pretty cool.

Nose: A herbacious and mildly fruity hop dominated nose with a wheaty and subtle malted scent underneath.

Taste: A mildly wheaty and herbal flavored malt hit rides under a mildly sweet, red-fruit flavored hop taste that is basically a short to medium-range hop bomb. Nothing really to explosive here.

MF: a light bodied look and feel with a crispy and peppy feel almost to the end.

DA: Two pints was enough for me.

I have this beer on tap time to time when I go down the #9 alehouse.

Pours a dark red body with a thin head that doesnt carry to much aroma. A little hoppy, malty and fruity but even that combination doesnt give it a strong smell at all.

The taste isnt really to impressive either. Not really any bitterness in this ipa, not a lot of hop prescence, malty more than anything. A little fruity as well, maybe some grapefruit or orange.

Pretty smooth finish that doesnt really leave a lasting impression in your mouth. Mouthfeel is a little watered down with some carbonation. This is a beer you can drink down easily but lacks in flavor and bitterness. Not my choice pick of a good ipa, but not a bad beer to grab off the tap when there isnt any other selections.

Good starting eggshell white head. Settles on the slow side, leaving some streaky lace. The beer is crystal clear. Darker straw color. Mild hop aroma with an unmalty, grainy touch. I also notice some alcohol to the nose. A beer that I would recommend but am unhappy with the people brewing it but I guess it is alright.