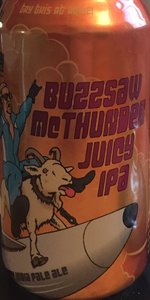 O - love how this smells, but the taste isn’t as appealing.

Appearance is hazy copper with a thin white head of average retention and lacing. Aroma is grapefruit and pineapple. Taste has a slight sweetness with some citrus pith bitterness. Finish is clean with a moderate bitter aftertaste.

A 16 ounce draft pour at the brewery.

Aroma is superb; dank aroma had me at first sniff. Nice malt-hop balance; mild bitterness—not quite as much hop flavor as the aroma would indicate. Almost clear with golden hues and nice lace. As an IPA fanatic, one of the better IPAs I’ve had—well done.

i dont necessarily trust the establishment i had this on tap at, but it really wasnt my favorite, i think maybe a combination of slightly dated beer, less than perfectly clean lines, and having had so many other hoppy beers from these guys in close proximity that were so much more flavorful, clean, and bright. maybe on its own it would pop a little more, but for me, in this context, it tasted a little like cleaner, and had a bitterness to it that goes beyond what belongs in a juicy these days i reckon. in addition, it also had a little phenolic thing going on, like the fermentation didnt go quite right, and the flavor of the hops seems oddly samey, given the unique name and branding on this. its nice to have a juicy type ipa that isnt real hazy in appearance or heavy in feel, more of a west coast type juicy i guess, but the hop flavor to me is just a citrus thing, a known entity, nothing really sets is apart, and with the weird chemical thing going on behind it, the beer isnt that cohesive or satisfying. i will reserve harsher judgement until i can have this in a different context, but it seems like one of the less compelling hoppy beers iron goat is making right now. anyone else think differently?