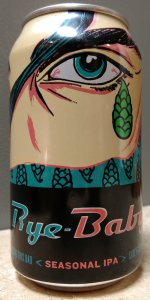 Rye Baby IPA ain’t for no squares! Brewed with floor malted English Marris Otter and a hefty charge of rye malts, this beer brings a spicy malt presence to the scene. But its the hops that are the stars of this hep ale. We hopped Rye Baby with copious amounts of Chinook and Simcoe hops and then dryhopped it with a blend of the two to give it an amazing hop character that will make you the baddest delinquent in Baltimore! We think Rye Baby is a delicious beer that you’ll be burning inside to drink, and if that’s a crime we’ll stand convicted!

Bouquet:
Leads with a sharp abundance of rye with a coattail of warm pine.

Feel:
This one is unique. Its carbonation doesn’t add fuzz or fizz, but instead adds a sense of heft to the body, hedging into the medium weight range. It moves over the tongue with the sinuous slide of a crisp, light ale but maintains the desirable girth of a medium bodied IPA. Without that foamy omnipresence, this IPA would inevitably come across as watery; but thankfully, that tactful heft remains until the glass is drained.

Taste:
Bold, bitter pine resin riding in on a steady stream of rye malts and American hops. The rye aspect is earthy and peppery, and its followed closely by hushed tones of tropical fruit.

Poured from the tap into a mug. Pours red orange with a small white head. Smells of spicy rye grain, not much else. Tastes of spicy rye with slight citrus notes. Beer is light bodied and easy drinking, good carbonation. Overall a very good beer.

12 oz can, smeared date on bottom

I am shocked--shocked and saddened--that is took until the twenty-teens for a brewer to come up with this pun.

12 ounce cans cost a little over two bucks apiece. The artwork is sophomoric but appealingly unpretentious.

Tastes like it smells: sharp rye, though not as sharp as the aroma, combining with biscuity malt and a dry hop finish. This is the sort of balanced, well-crafted beer that used to be a staple of the American craft brewing scene. While I can't say I'm a fan of the price, it's a good enough beer to consider revisiting.

12 oz. can poured into a tulip style pint glass.

Hazy and translucent in the glass, deep golden orange in hue with one finger of almost white foam that leaves goods lace.

The nose is moderate in strength, malty and sweet smelling with some fruity hop aroma.

Taste is malt forward but spicy (peppery rye) with a mild hop bitterness that seems to build as I go.

Medium bodied and somewhat gritty it starts out crisp the turns a little frothy as the carbonation dissipates.

Not bad at all!

Yields two to three fingers of tan foam, the even surface riddled with bubbles of varying sizes resulting in pockmarks, otherwise retention is above average and the lacing forms extended streaks with excellent stickiness. The haziness is light enough to allow you to see through it decently, coppery orange-brown colored liquid, tiny bubbles move super slowly towards the surface, like watching film at the wrong speed. The rye is omnipresent in the nose yet does not bring cutting bite, more driven by chocolate, cocoa, remarkably clean and gentle for all the heaviness in the nostrils, green grape, red berry to apricot fruit scents, mandarin orange round it out, admirable overall integration. Full-bodied, bottom heavy without getting anchored in place. The carbonation adds more softer fluff than prickle, no scrubbing sensations. Intriguing fruit flavors of honeydew melon and watermelon keep coming to the fore, then grape, apricot, cherry. Mocha and caramel also play a role, overall though not excessively sweet while the texture is not drying either. Inconsistent pepperiness and spice, finishes on a piney note. Very interesting assemblage but the heaviness likely would restrict you to no more than two in a sitting.

12 oz can poured into a snifter

A- A hazy reddish copper with a three finger white head

O- Rye is a huge part of this beer but it stil has a great hops tastes to go along with it. Definitely another winner from Union.

S: Great pine notes, with the rye more evident in the very beginning and the finish.

T: Definitely on the bolder, bitter side. Thick pine flavors, bordering on notes of tar with ever-so-slight tropical notes. Awesome finish, which is what keeps me coming back to this beer. Not only goes it go down smooth, but there are no heavy lingering tastes after it goes down. It starts thick with hops, ends with a definite but gentle pine fragrance cut with peppery rye.

F: Very liquidy, but very smooth. Carbonation does a lot to contribute to the balance of the beer. I could drink this all night, its substantial but not heavy.

O: Heavy hop flavors well-balanced with earthy and peppery rye, carbonation and a thinner texture. I love sipping on this.

Wow! What an IPA. The best thing about this beer is the mouthfeel. It's so silky smooth. Unlike most anything I've had for a well carbonated beer. My new favorite Union beer offered in distribution.

A more subtle rye driven more by it's IPA-ness. The subtle sour/spiciness comes through on the backend pleasantly. Slightly resinous. The Chinook and Simcoe hops are the stars of the beer with an awesome eye crew backing it up.

Pours nice and thick, like Monocacy Riot Rye. Same deep hue too, like a marzen but a bit hazy.

Smells of minty, fruity hops and maybe a little vanilla from the rye.

Tastes pretty bold and brash, with biting hops and peppery rye. Hops have an indistinct sort of fruit salad character, with fairly aggressive minty pine bitterness around the edges. Some nutty toasted malt mid palate and a little orange juice flavor on the finish.

Feel is medium-full, somewhat creamy, with plenty of resin coating the palate.

I love a good rye IPA and this one is no exception. I think Riot Rye still holds the local title, but Union put in a solid effort here. Peppery and full-bodied.

Pours a murky copper color. The head is two fingers high and off-white in shade. Retention is excellent, and the creamy head leaves behind a spectacular wall of lacing on the glass. Still, it loses some points for having ugly chunks of sediment floating around.

Rye IPAs tend to be malty in order to showcase rye malts more effectively, with the hops existing mainly as a balancing feature. In that regard, this beer's aroma is incredibly successful. Rye is the dominant note, backed by some caramel and earth. There isn't a significant presence of fruity hops here - they're mainly piny and floral, with a grassy touch. Actually, some touches of melon and mango appear if I properly focus the olfactory senses. It's hard to complain with the aromatic qualities, as it shows off exactly what the (rye IPA) style dictates while adding a moderately complex touch.

The flavor reveals some gentle fruity notes at the front of the palate. Afterwards, the rye takes over in a big way. I don't pick up a significant Maris Otter malt presence apart from a touch of caramel. This is all about rye malts, as it should be. Even better, the hops balance the malt backbone without coming across harshly - everything exists harmoniously. Simply put, it's a damn tasty beer.

Most rye IPAs tend to be heavy, thick, and sweet. The palate feel nails the first two aspects, but it really isn't sweet at all. Instead, it's malty yet dry, and that's how it should be. It's a bit slow drinking compared to other IPAs, however. That doesn't bother me because of how nicely balanced everything is. Carbonation is medium-low.

Union makes good beer. This is more good beer from Union. Get some if you're in Maryland.

On cask at pizzaria paradiso in Geeogwtown.

Minor rye notes in both the aroma and taste. Not level with your standard rye beer.

First off I love Rye IPA's. This one was excellent with a very pronounced rye flavor with all the hops you would expect from an IPA. In a tasting of 22 beers this was my favorite.

On-tap at Meridian Pint, Washington, DC (back in March):

First off...loved this beer. Big fan of the Rye/IPA combo. The beer appeared a darker, hazy amber/orange color with a thick, creamy white head that was very well retained. The beer gave off a nice pine hop aroma and the taste had a nice rye flavor, but was a bit overpowered by the citrus hops, instead of being more complimentary, but I still found the flavor very enjoyable. The beer had a good feel to it, chewy, but not too heavy, with a dry aftertaste. Overall, I wish that I could get this beer in Georgia, but the next time that I see it, I am definitely going to buy one.

On tap in a pint glass.

T- More citrus, like the smell. The rye malt and spices show up to round out its big flavor.

Had this on tap at Max's recently during the beer's release, then later at the brewery.

Poured on draft to a tasting glass. Pours a burnt orange color, with a minimal amount of off white head. Smell is of hops, juiciness, grapefruit, and some orange. Taste is similar though this is where the hops really come through. Also get some caramel and rye notes. Overall a decent beer and one I'd seek out from Union again.

The beer is listed as follows:
Rye baby IPA ain't for no square! Brewer with floor malted English Marris Otter and hefty charge of rye malts this beer brings a spicy malt presence to the scene, but its the hops that are the stars of this Ale. We hopped Rye Baby with copious amounts of Chinook and Simcoe hops and then dry hopped it with a blend of the two to give it an amazing hop character that will make you the happiest juvenile delinquent in Baltimore! We think Rye Baby is a delicious beer that you'll be burning inside to drink, and if that's a crime we'll stand convicted!!