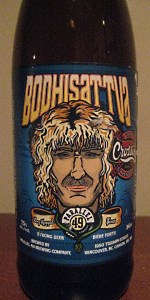 Citrus and tropical fruit in the nose, with a slight funky scent. Moderately sour with bright fruits (pineapple and mango) and a touch of funk. Medium bodied, lightly carbonated. Solidly good but not remarkable.

Poured into a tulip with a massive head.
Apple juice like in colour. Head faded to an island with minimal lacing.
Nose is green apple, green grapes and peaches. Flavour follows suit with fruit being dominant and sour quite reserved. Very similar to a sweet Sauvignon Blanc or Reisling. Closer to fresh green grapes.
There is good sweetness which gives credence to its solid mouthfeel. Overall, I like this beer. A bit sweeter than I typically like my sours but the wine like flavours definitely redeem this tasty brew.

Pours a very clear straw colour with a massive load of bubbles and a thin white head that disappears almost instantly. The leads with lots of tropical fruits like pineapple, kiwi and peaches. There is a very floral smell to this beer and by floral I mean it smells like very fragrant flowers, not just hints of. There is a very wine like quality to the smell. The flowers take a backseat to the fruity side when you take a sip. The citrus hop jumps to the front. The is a slight vinegar like sourness that makes you hold the pucker for a while. The carbonation is not just massive in the glass but lingers in the mouth. A pretty refreshing beverage that I'd pick up again.

A slight haze in a bright yellow body, tornado of tiny bubbles feed a well sustained two finger foam but leaves no lace, takes a couple minuets to calm down she well carbonated that's for sure

S massive tropical nose on this one, pineapple, mango, passion fruit, lemon, smells like candy, there's some mellow funk, apple cider vinegar, I get some white vinous notes but I'd never guess this was aged in chardonnay barrels, smells amazing though

T not the massive tropical nose but still very juicy, slightly more vinegar but its still mild, some green apple and white grapes, a smell step back from the nose but still wonderful

M sour but mellow, lighter then expected, not as carbonated as I'd guess after watching the stuff explode in the glass, dry, I'd assume much more then 8 IBU's, much, much more

O I'm so glad I grabbed this on a whim, massive nose and not lacking anywhere, so easy to smash this back, I'm gonna grab a few more to see what time will do to it

Who knew? terrific beer fresh, so much tropical juice in this one its crazy. I really wish I had tried this stuff sooner as its pretty much gone from the shelves at this point.

Pours a clear golden yellow with two puffy fingers of foamy white head that leaves patchy clouds of lace as it recedes.

A: Clear amber liquid with slight carbonation and minimal head around the edges of the glass.

O: Very white wine like. One of the better beers I have had from this brewery.

The dry hops really compliment the gooseberry-like Chardonnay flavours. Light tartness/acidity supports the alcohol and provides some structure. Truly world class. I had to open a Nectarous for comparison, which didn't measure up.

Review from the 2015 Advent box. They changed the hops on the bomber release (and it wasn't quite as good IMHO).

I only wish it were more readily available.

Day 9 of the P49 Beer Calander, kinda excited because my friend hates sours so I got to drunk it!!

L: Hazy yellow with a light white head that stayed for a little while.

O: An amazing beer, super good, and so glad I was able to taste it!!

So glad to see this beer back after first having it as part of the Crossing Advent Calendar pack. This beer is a great sour. It looks like nothing with a very thin and short lived white head but it is all n the smell and taste. It is also obviously very thin in the mouth but with some of the highest carbonation I've had in any beer whatsoever.

341ml bottle @ 7.5% ABV, day 9 of the 2015 Craft Crossing Calendar, a 'collaborative' effort once again between Parallel 49 and Central City brewing. A surprisingly suitably named brew for my 5,000th review on this site, for reasons I shall get into later.

This beer pours a clear, bright medium golden yellow colour, with a teeming tower of puffy, rocky, and yet somewhat fizzy off-white head, which leaves some splotchy inkblot test lace (really!) around the glass as it quickly subsides.

The carbonation is adequate in its basically supportive and sometimes frolicking frothiness, the body on the light side of a typical middleweight, and generally smooth, for the style, as the bubbles seem to provide more astringency than the funk and/or hops. It finishes trending dry, that edgy white wine essence becoming more and more difficult to ignore.

For a wild ale, this is very easy-going, without forgoing the things that sour-heads want to see - the funk, the fruit, and yeah, I suppose the hops. Anyways, an appropriate offering, in name, at least, for this reviewing milestone of mine - a Bodhisattva attains a certain spiritual plateau, and instead of moving on, stays behind to help others achieve the same thing. The only difference here is that I don't intend on staying behind, but I still encourage you all to join me going forward.

Bodhisattva from Parallel 49 Brewing Company
Beer rating: 90 out of 100 with 46 ratings