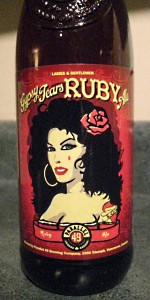 A ruby red coloured ale with a rich caramel malt flavour and a burst of West Coast hops. Using only late hop additions and dry-hopping, the bitterness is restrained while the hop flavour and aroma are pronounced.

355ml can poured into tulip.

Pours a slightly hazy amber with one finger of beige head that leaves clouds of sudsy lace as it recedes.

Verdict: Recommended. A nice, solid amber with some punchy hops.

Wow, this is a fantastic beer. Gypsy Tears is my favourite beer in Ottawa. A gorgeous red colour in the glass. Swirling it around in your mouth tastes rich and sumptuous. The aftertaste is outstanding: I counted three distinct phases of different flavours in the aftertaste, finishing off in a bitter full stop.

I have drunk lots of different ales, bitters, stouts and porters when I lived in England for 14 years, but Gypsy Tears compares with the best British beers I can ever remember. This exotic gypsy has entranced me and stolen my heart. The only tears are mine when I peer into my empty glass.

Note: The cans I buy from The Beerstore say "Gypsy Tears" in big letters across the top of the can, not "Ruby Tears". No worries.

Reddish copper with no carbonation, a slight haze, and 3 fingers of light beige head.

Tastes of honey biscuit and red twizzlers. A moderate bitterness on the end as well.

Really good, balanced, moorish beer. I could drink this repeatedly and it would pair with a lot of food choices. Drinking Dec 2nd, 2017.

Dark reddish amber pour. Aroma of citrusy hoppy caramel malt. Has a notable but not overpowering bitterness with floral hop on backbone of caramel malt flavour. Seemed a little thin and though not my favourite Parallel 49 offering, a decent enough brew.

Sharper and stronger than the average red ale. Dark Amber colour, pours without excessive foamage but produces an off-white respectable head on pouring. Has some difficulty keeping its head up. Nose is crisp and fresh with a touch of citrus and malt. Slightly dry, hoppy flavour with a pleasant blend of toasted malty bitterness. I don't feel or taste caramel in the beer although definitely there in the colour. As another reviewer mentioned there is something of a marriage here between an IPA and red ale, IPA buffs will love this beer for its IBU, strength, and citrus notes.

Appearance: The initial pour reveals a bronzed ruby red hue and a modest white head that swiftly fades away.

Smell: It appears to a very weak scent of floral hops, but a rather strong smell of toasty malt/sweet grains and perhaps a hint of spiciness hiding underneath it all.

Taste: Almost indiscernible to the smell in terms of description; a pleasantly bitter taste, balanced by hoppy fruitiness and malted barley.

Feel: Slightly carbonated, not overdone but a tad underwhelming.

Overall: A decent red ale. Maybe too simplistic for my taste but very refreshing on a hot summer day.

On tap at The Lift in Vancouver, BC. A beautiful clear ruby amber with a nice off-white head. Initial impression is caramel, barley, a bit of hops bitterness, some tropical fruits, and a nice citrus thing going in the background. Medium mouthfeel and light-medium carbonation. Finish is somewhat dry and slightly hoppy. Very nicely done.

A: Translucent medium brown with some redness. No visible particulate. A small amount of beige head remained after pouring.

O: Flavourful but a bit too dry and bitter for my tastes especially as I drank on.

This is a really solid beer at a good price. Nice and hoppy the way I like it, tastes more like an ISA than a red ale which I really like. I reccomend it as a solid cheaper end craft beer. Try other 49th parallel brews as well, it's a great brewery.

On tap at the Pan Pacific Vancouver, served in a 20 oz glass. Clear, deep reddish amber with fleeting white head and scarce lace. Caramel malts, citrus rind and earthy, leafy hops on the nose. Flavor shifts more towards tart and bitter grapefruit as well some some malty notes. Mouthfeel is well carbonated over a medium body. Drinkable red ale with a few rough edges.

Pale red colour, one finger of off white head and some lace. Smell is of sweet malt and fruity hops, sugar dusted grapefruit and orange and a bit of a sweet caramel malt. Taste is in line with the nose, moderate bitterness with lingering fruit in the aftertaste. Light carbonation, medium body. Jut OK, nothing is wrong with this beer but simply not worth revisiting.

Poured from a 473ml can with racist-as-hell graphics.

Not much hop aroma. Meh.

Caramel malt is the dominant flavour. Some piny hop flavour and bitterness provide a bit of balance. Not as cloyingly sweet as this style can sometimes be.

This isn't nearly good enough to make me ignore the disgraceful racism of the label design.

O- The epitome of what an American Red Ale should be. The perfect amount of caramel/malty sweetness paired with a good amount of hoppy bitterness.

You cannot say that this beer doesn't deliver a solid look, smell and taste. A true American Red Ale. Very drinkable and quite enjoyable. Room for improvement, of course, but without most complaints. Cheers!

355 ml bottle served cold into a pint glass. Purchased from the LCBO as part of a summer sampler pack, so about $2.30 CDN per bottle.

Appearance - Dark ruby colored beer, with just a bit of a haze and topped by an unrelenting finger of white head. Good visible carbonation that invokes images of a prickly carbonation once this will be consumed.

Smell - Some graininess, with a decent dose of grapefruit followed up by some caramel.

Taste - Starts a bit malty, then turns bitter with some earthy flavors and grapefruit. Clean and crisp with a long last flavor that lingers on the aftertaste. Caramel and sweetness only shine through after a couple seconds and the grain and then bitter grapefruit flavors pass by.

Mouthfeel - Smooth and medium bodied, with prickly carbonation as expected by the look. Finishes a bit dry, but that works with these flavors.

Overall - A fine amber ale that was worth the price and would certainly enjoy again. If I could get a six pack with just this beer I gladly would.

Tad watery as far as mouthfeel. Minimal head on the pour. Some nice lacing as I tip the glass. I liked the colour when held up to the light; deep red with a slight caramel hue. I get a touch of hops that's quickly replaced by citrus, namely grapefruit. Finishes clean and not bitter at all. I'll be back for more.

A: The beer is slightly hazy amber in color and has a slight amount of visible carbonation. It poured with a quarter finger high off white head that died down, leaving lacing on the surface and a collar around the edge of the glass.
S: Light to moderate aromas of toasted and caramel malts are present in the nose.
T: Similar to the smell, the taste has flavors of toasted and caramel malts and slight bits of sweetness. No bitterness is perceptible.
M: It feels medium-bodied and a bit watery on the palate with a moderate amount of carbonation.
O: This beer seems to be rather malty, but isn't that sweet. I'm not sure if the hops were past their prime.

Can't say that I know one ethnic Roma with blue eyes, and the taste here lacks similar authenticity. It's prettied up and will appeal to those who are looking to claim at trying craft beer, without much knowledge of IPAs and red ales.
I will not have this again.

This is an extremely well done beer. It looks great - deep ruby color with a nice lingering tuft of head. The nose is West Coast hops that extend into the flavor profile. There is lots of toasted malt balanced with dark fruit and signature grapefruit essence. There are many layers to this beer and it is absolutely delicious.

S - an assertive start of rich aromas; toasty caramel malt, a bit bready, with a lot of NW hop notes, grapefruit, citrus zest, florals, with some earthy aspects from the malt, some juicy red fruits and berries, raspberry notes, butterscotch. Quite nice, if slightly muddled.

T - similar lines here, assertively hoped, notes of grapefruit as well as a coating resiny undertone, piney for sure, underneath there is some caramel notes and an underlying breadiness to counter the pronounced bitterness. Some spice, chilis, earthy cumin, and the orange fruitiness. Finish is lingering, some red fruits and the lingering herbal hop notes.

M - satisfying, as well as refreshing. Good balance while also delivering a decent hop kick. Moderate body and I find quite well carbonated. Has some sharpness.

A nice hoppy Red IPA, I could maybe nit-pick some things but realistically it tastes pretty good, delivers well on both the malt and hop notes, and is also crisp on the end and easy to drink down. I might not search it out for awhile but would certainly have it again, a nice hop character and balance, and a good beer all around.

Pours a clear honey brown with a foamy beige head that settles to a partial film on top of the beer. Foamy swaths of lace form around the glass on the drink down. Smell is of malt, brown sugar, citrus zest, and funk aromas. Taste is much the same with slightly sour brown sugar, citrus zest, and funk flavors on the finish. There is a mild amount of acidity bitterness on the palate with each sip. This beer has a lower level of carbonation with a slightly crisp mouthfeel. Overall, this is a poor beer that is obviously showing signs of infection, but there are a few aromas and flavors that I can get other than sour and funk.

Ruby Tears from Parallel 49 Brewing Company
Beer rating: 86 out of 100 with 228 ratings