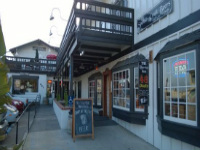 I went here for lunch on a quick turnaround trip. The bartender was very sweet and helpful, and despite a large group coming in with only her serving kept her cool and got it done! Had the Belle Rouge which was an outstanding blended sour, with pretty good shrimp tacos. Looks like they have live bands which would be fun, and you couldn't ask for a better location being waterfront. Cheers!

This is a pretty old-school place in Morro Bay. Its been around for a while and the beer selection is pretty good. The music is a bit loud for my taste at night, but other than that, can't complain.

Made it up to this area yesterday, so I had to check this place out. Just to get this out of the way, there were only a couple knocks on the place. The restaurant was a little understaffed, so they take a while to get to you. Once they do, the service is fantastic. The place is also right on a dock and there are a lot of flies in the place. I don't know if the flies are dock-related. That was my explanation. Anyways...moving on. Food was pretty solid, but the highlight was the beer. The Summer Breeze with Mango was one of the best beers I've had all year. Just amazing. And their Framboise is top 5 I've probably ever had. They had a couple other interesting house experiments, a chocolate gose and a chocolate pomegranate sour porter, that weren't mindblowing, but really cool experiments. A good case of bottles as well. I don't know that I'd go specifically for the food or the atmosphere, but the beer is more than worth it. Get over there.

I don't make it up to The Libertine Pub often, but when I do, I'm greeted by great people with great beer. Definitely check them out if you're ever in SLO as they are really doing fantastic things with beer.

Had a great time at Libertine! Got a flight of their beers, and then another flight of some killer guest taps. Grabbed the sampler plate and a few beers out of the fridge, as well as some of their own beer in bottles to go! Highly recommend this place!
Can't even tell you about the view from the back bar area... whoa.

This place could be awesome. This weekend, it probably will be. But today (yesterday, actually), they are getting ready for their 2nd Anniversary party on Saturday night. As kegs blow, they aren't putting anything else on, because they're holding back a bunch of good stuff for the party. That means that out of 48 draft lines, there is only beer on 28 of them right now and that's as good as it will get until the weekend. I'm leaving town early Saturday morning, so yeah, I'm dinging them for that.

That said, the 28 lines that are running are pretty damn good. A good variety, from hoppy (Mach Ten, RuinTen, a couple of other IPAs) to funky (a couple of saisons and Belgian-style) to sour. The sours deserve a mention of their own. They brew on premises and that's all they do is sours. The two they had on today were pretty damn good. Black Ruby Slipper was a blend of their soured porter and Flemish Red. The other (can't remember the name, Turkey something-or-other) was mostly the porter, but had some serious chocolate notes with a nice puckering finish.

All in all, I will go back the next time I'm in town, and I recommend you do the same. The staff was very knowledgeable and helpful (although that was partially because business was slow). I'm just pissed about the selection being half of what it should have been.

This is one of the best places for beer on the central coast. There are 48 taps that are consistently rotating new and interesting beers from all over. Plus they have a solid bottle list. The food is a marriage of traditional pub affair and what you might get at a gastropub. Great fish tacos and hush puppies! The people are awesome,too, especially if you enjoy a little dry humor with your beer like I do.

This place is worth a stop if you're heading up the coast, or doing a tour around San Luis Obispo. Twenty taps and mostly quite interesting. Two barrel aged Figueroa Mountain brews plus four or five others from them. A variety of California breweries like Firestone plus a German. A few bottles, also well selected including Stone's Götterdämmerung IPA at a very reasonable price. They also brew their own, and the one Farmhouse Ale on tap was excellent.

Everyone seemed to be having a good time. Barmaid was nice and seemed to know the beers. Lots of TVs to watch. Looks like fish and chips for eats, but kitchen closed when we were there. The only trouble with this place-- or maybe what you go for-- is they will play your vinyl records on the stereo. It's just so unholy loud. And then it's off. You heave a sigh of relief, and then it's on again. Bands play upstairs sometimes.

Nice location on the waterfront in Morro Bay, which is one of the most interesting little harbor towns. We stayed at the Beach Bungalow Inn, which I also recommend.