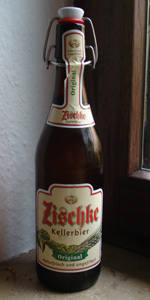 Look: Surprisingly both clear and light straw gold in color. The head is a short cap of dense white foam that holds very well. Hundreds of tiny bubbles can be seen racing towards the surface. Sadly, the lacing is limited.
Smell: Sweetish, doughy, and fruity with apple.
Taste: The flavor is not as sweet as the aroma suggests it will be. It’s a bit acidic, still apple-like, and stiff with bitterness. No hop flavors are found. It finishes gently acidic and mildly bitter with red apple fading steadily.
Feel: Medium bodied and gently crisp despite a clearly effervescent carbonation. Slightly astringent.
Overall: Refreshing and easily drinkable but certainly not the most well made beer out there.
Review #7,429

Would make a great session beer.

appearance: The clouded limey green color really a pleasure to look at depending on your perspective. Keep s a good lacy head.

smell: Weak malty smell. Fruity hints on the edges. You really have to get your nose in there to smell it

taste: Malty subtle flavor. Not pronounce and kind of disappointing.

mouthfeel: weak but somehow filling. Makes you want more it is almost explainable

overall: Why is this brew so good. For some reason this is a great beer and I love it but it doesn't taste like much and it really isn't very filling. Its just a generally good beer. And the wife loves it.

O - Although very light and mainly dominated by yeasty and citrusy flavours (something I'm not normally a huge fan of), something about this beer was really enjoyable. It has such a crisp, summery feel to it that it feels like you can drink it anytime. My .5L Bügelflasche was purchased at a CenterParcs in Germany, and for a bit under 2 euros, I'd say it's quite a steal.

Taste: Slightly bitter, but overall it is very watered down; very thin, like a radler without the lemon

Remarks: Did not score A, T, S, M at that time; disregard those scores

I was disappointed in this beer. Today I went to the speciality beer shop in Berlin, and i decided to buy 8 or so beers with the only criteria that each cost more than e2.00/ltr (or e1.00 for a standard 1/2l bottle). This approach probably weeds out 80-90% of the multitude of offerings. So tonight I've had a cracking couple of beers. But I hate to say it, this one is doing very little for me indeed, despite it's price.

The beer is a fogy dark yellow keller. Despite the promising color, the head looked like detergent bubble that fainted within few seconds.

The beer had a light but nice lemony smell. The taste is almost absent but enjoyable and not as bitter as a Pils. Carbonation is interesting, there is a lot of small bubbles around.

Interesting and easy to drink beer. I'm not crazy about it but I would try it again.

Pours beautifully with a nice think fluffy head, however aroma and taste leave a lot to be desired. Cloudiness of a keller is there, but aroma is faint and sweet/citrusy. Taste is also on the very light side, like a helles lager without the hop presence.

Pours a lightly hazy gold, very effervescent. The eggshell head has nice fluff to it, though retention could be better. Some lacing.

The aroma is raw and yeasty.

The flavor is actually a lot cleaner than I was expecting from the aroma. Some hay, grains, earthy yeast, and a bit of fresh, grassy hops on the finish. Light, but pretty bitter. The mouthfeel is prickly and refreshing.

Probably not something I'd buy again, but not bad at all and totally drinkable.

This beer comes in a fliptop bottle. It pours a murky, orange golden beer with a small head that almost disappears.

Smell of pilsner with some "green veggie" notes. A yeasty smell and some raw notes. No hops.

Taste is a light and has a raw malt smell, some straw and floury notes. The beer has yeast in it, and that comes through in the taste. A fleshy taste.

(On tap at Brahaus Aktuell in Koblenz, Germany)

Smell
Faint hints of honey...little else

Taste & Mouthfeel
Opens with a good, crisp bitterness followed by honey-like malts; finishes fast and clean with just a tad of that honey flavor lingering

Overall
Light but really tasty and very easy to drink.

Curiosity dictated I pick this one up, so here goes.

A: Looks kind of like a watery weizen - slightly cloudy light yellow with a foamy white head that dissipates quickly.

S: Hops, yeast, a sort of grassy undertone, and a bit of an acidic kick - certainly smells "nature fresh and unfiltered," as its slogan advertises.

T: Strangely sour, with strong hop and yeast flavors. Kind of bready, but white-bready, with some grassiness thrown in for good measure.

M: Kind of watery, yet also clinging. It almost seems to refuse to go down, leaving a bit of residual film behind.

D: Light enough to allow multiple beers to be consumed, but the clinging property is kind of a turn-off for me.

I believe that it's "a genuine fresh product," as the label claims, and it's certainly interesting, but I'm just kind of underwhelmed by this one.

Nature-fresh and unfiltered, or so goes the slogan for this cellar-beer. It's an unfiltered beer with a hazy-golden appearance. Doesn't look too bad -- nothing like the other near-transparent beers I saw going around.

The first aroma you get of this is yeast, and you would expect that from an unfiltered beer. Smells something like a field aside, which is pleasant but not earth-shattering.

Now, here's the big surprise: it drinks like a light beer. Unduly carbonated and subtle, it's not the most impressive at first drink. But strangely, it seems to grow on you. I had a mate test it out for me twice, once early and once later. He didn't seem to notice a difference, but I was getting the impression as I went along that the flavour was evolving. Rather, it seems that the particulates leave a bit of leftovers for you as you drink. Still, it's never too heavy on flavour. Unusually weak for an unfiltered beer; almost more like a pilz.

The softness of the flavour and feel make it reasonably drinkable, but not incredibly so. It's not something for all occasions, either. For watching a EuroCup final, it's not unsuitable but not ideal. Slightly above average, overall.

This half litre flip-topped bottle was obtained during a beer collecting trip in Germany (June 2007). Drank 7 days before its due date.

Slightly hazy look, which gives the beer a dull golden hue to it. The second pour was obviously a little more hazy. The clean white head falls away very swiftly, it started three inches high and before I had lifted the glass it fell to less than half an inch.

Aroma is good for a kellerbier, slight sourness, which flows into the taste and some wheat, even though it has none in it.

A little dry and weak tasting, but still some flavour of yeast and hops combine to give the beer a different taste to this breweries normal pilsner beer.

The dry sourness does stay in the mouth, but the overall feel is only average, the brewer hasn't pushed any boats out. This is a run of the mill kellerbier, I was hoping for more from an old Pilsner brewery I used to support when living in Germany.

Zischke produces ample amounts of bright white head, which clumps together quite nicely. The body is orangish gold in color and is ultra hazy.

The taste is a little bready with orangish nuances.

This is a little chewy and well bodied, even for the lower alcohol content. The left over yeasts leave behind a unique texture.

Best before 30-04-05. Pours in fine and gives a nice head that stays quiet well. Golden color with a fine opalizing cloud. Nose is fine too, sweet malty, fresh and delicate yeastfruit. Taste is litle empty though; lightly malted, watery and dry. That with a poor hopping giving just a light aftertaste and mouthfeel. Only that mouthfeel is a litle tinkled by the carbon dioxide. Drinkability is ok but am a litle dissapointed in this one being a German Urtyp Unfiltriert! Nothing wrong with it though.

This beer has weizen like looks. Pours a cloudy light yellow. A thick white head meets the top of the glass but rapidly fades away. Aroma of yeast is present. Not a weizen yeast but a musty smell. Taste is more pilsner like with a yeast backing. Thin body and a watery feel kilss this beer. Overall an O.K brew to try.