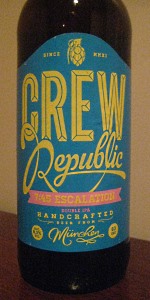 I'm honestly surprised at the good ratings here, as this combines some of the worst qualities of a DIPA to me, being way too sweet and boozy, with the floral hops and grainy malts also being too distinct for my personal taste and the tropical/citrus notes having that certain overripe quality to them remiscent of bubble gum that I personally quite dislike. I mean, it's not awful, but the balance is definitely quite off here, with the light bitterness struggling to overcome the overwhelming, sweet booziness and the hop profile feeling lacking.

Look: Clear deep gold body beneath a finger-thick head of creamy white foam that holds quite well and leaves remarkable lacing about the glass.
Smell: Pine, grapefruit, pineapple, melon, sweet grainy malt, apple, apricot, floral.
Taste: Decidedly piney and bitter upfront, with some of the tropical flavors following although most are lost. Dry, bitter finish with some alcoholic heat. The bitterness lingers.
Feel: Medium-full in body and gently crisp.
Overall: It looks good, and it smells good, but the tropical notes found in the aroma seem to disappear in the mouth. As you progress you'll find some here and there, but for the most part it hits you hard up front and then steps back immediately. A secondary problem is that the alcohol shouldn't be so clear at just 8.3% ABV.

Poured out a clear, golden amber color with a small, off-white head of foam. It smelled piney, fruity and of roasted malt. Sweeter tasting than I expected with a subtle bitterness.

O - An hopforward but balanced brew. The pilsner texture and malt profil leave the place for a great but subtle hop presence

Reviewed live as an imperial IPA per the label (which calls it a double IPA). Brewed with Columbus, Simcoe, Amarillo, Chinook. 8.30% ABV. 83 IBUs.

BODY: Clear copper of above average vibrance. Clean, with no floating yeast or the like.

It's a conventional imperial IPA appearance. Has no unique or special characteristics.

AROMA: Pine, onion, bubblegum, cream, pale malts, caramalts. The caramalts lend it seemingly too much sweetness, and I'm already fearing the worst for the balance. Some floral hop character is present in addition to the aforementioned hop notes. Bubblegum dominates, to its detriment. Some ale yeast esters bounce around in there, but nothing is distinct or identifiable...just yeasty intangibles.

ABV could be better disguised, but it's not so overt.

TASTE & TEXTURE: Imbalanced, indeed, with naked hop bitterness running rampant throughout the beer. There's inadequate sweetness to balance out the hop bitterness, but somehow all the negatives of caramalt (that raw sugariness primarily) come through, but none of the positives. Pine scrapes against the palate, simcoe-derived onion feels wacky, the bubblegum is all wrong in this build...it's a messy flavour profile with poor hop choices across the board. I don't care much for this. And there's a prominent (if not dominant) note of boozy ripe pineapple - the hop note I hate the most. This just really isn't for me, and the weird new world tropical hop emphasis isn't working to its benefit in any way whatsoever. Has some subsidiary notes of tropical fruit bits you wouldn't ever want to eat (e.g. bitter watermelon rind).

Mouthfeel is rightly medium-bodied, but has a somewhat rough scratchy presence on the palate. Overcarbonated as well, and unrefreshing. Too thick and hefty on the palate. Not a great complement to the taste overall.

OVERALL: A lack of fundamental balance ruins this beer, but the problematic texture doesn't help much either. I'd go back to the drawing board with a new hopping schedule (if not new hop choices altogether). This is a lackluster attempt at an imperial IPA, but it's worth noting this is one of only a few German breweries even trying them right now. I wanted to love this, but I can't recommend it over traditional German beers to those only in the country for a brief period. Not undrinkable for what it is.

Got this one from the Duvel guy down the road from the old place.

From a bottle into a snifter
IBU: 83
Best Before 13 April 2016
Hops: Columbus, simcoe, amarillo and chinook

APPEARANCE: A careful pour yields a 2+ finger, medium-thicker looking, creamy white head with great retention. Body is slightly hazy, amber orange in color and has quite a bit of active carbonation. Head slowly fades to a nice cap and leaves some decent lacing on the glass as it empties. Good looking.

SMELL: Piles of honeydew melon, passion fruit, some pineapple, tangerine, lemon and some dank notes on the nose. Very aromatic and well put together.

TASTE: Passion fruit, piney flavors, some musty notes with melon at the swallow. A bold but dry finish of hop bitterness, pine flavors, passion fruit and honeydew melon as well. Quite piney yet well balanced by the musty notes and melon sweetness. Good.

PALATE: Medium body and medium carbonation. Quite creamy on the palate, enough weight, goes down smooth and finishes a touch dry. Some bitterness lingers.

OVERALL: Really nice stuff. A mustier profile than you might expect for the style, but it works well with the melon character and piney bitterness. Bold in both aroma and flavor as well, which made it all that much more enjoyable. A good brew for sure. Cheers.

Not a bad beer, pours in with a nice fluffy head. Look like amber, nice Aroma: malty and sweet but also tropical fruit notes, papaya and pine. The body is well balanced, rich , can't really taste the alcohol. There could be more hoploads in this beer, to challenge the rich malty sweetness.

A Double IPA in the raw. Columbus, Simcoe, Amarillo, & Chinook hops lay down some crazy layers of flavor. From fruity overtones to fresh grass, bitter resin to citrus rind. Big kiss of caramel is pushed down by the alcohol. Get this, 8.3% abv and 83 IBUs ... coincidence? Interesting enough to keep to push forward and take sip after sip.

Picked this up at a great beer shop in Darmstadt, Germany, Maruhn Welt der Getränke. Cloudy amber-orange pour with a two finger off-white head with great retention and lacing. Fruity tropical notes dominate the nose along with hints of caramel, biscuit, pine, pineapple, grapefruit, peaches, and bread dough. The taste follows suit with loads of tropical fruit and piney hops with hints of caramel, pineapple, grapefruit, bread, and tangerine. The mouthfeel is oily and chewy with a nice bittersweet finish and great drinkability. Overall, a flavorful double IPA worth re-visiting.

S-big tropical fruit on the initial smell , kinda like peach

Ov-hmm , not sure , big tasting beer , certainly is ugly looking , butt a certain craft to it

Beautiful wildflower honey nose. Malty, sweet, bready base as a german bier should be. The flavourful and aromatic NW hops are a perfect addition to this brew. Excellent, expertly designed and engineered.

Tastes of fruits, which convert into more fruits. From orange and peach to stone fruits like red apple and ripe grapes, even some hints of honey, really intense. Fruitiness changes into a malty, bready direction, which becomes more and more bitter, with a long hoppy finsih. While the hoppiness kicks in, the floral, fruity tastes are still remarkably present, which gives the beer a powerful, complex aftertaste. Carbonation is perfect, not too much, underlines the freshness of this beer very well.

Great german Double IPA (difficult to find this kind of beer in germany) of an orange color and a great whitey and creamy foam.
Smell and taste are extremely hoppy and fruity, the highlights go to the citrus and to the herbal notes like basil.
Body is not too high, carbonation is at great level. The alocohol is well hidden.
Great beer!

S: Citrus hops were prominent alongside some phenols and farmyard funk.

T: A burst of grapefruit and molasses, yesty and sharp. Initially it had more bitterness than other Imperial/Double IPAs. Towards the end there was a significant boozy burn.

M: Thick texture, almost chewy, minimal carbonation, fairly smooth, but
one to sip rather than gulp.

O: It was very good without being absolutely outstanding, nice for an
Autumn day, Germany is getting that hop bomb bug, all in all that has to be a positive development.

tasted at 52F
A: orangey, amber
S: big! dark fruitcake, intense, breaddough, candied
T: a gigantic beer in every way!!! But everything is balanced ... just amped up! Malt and hops are nicely balanced
M: huge
O: the style is too much for me but if you like a double IPA big, big, big this is your beer.

This beer pours a rather cloudy, murky tarnished golden apricot amber hue, with three fingers of puffy, tightly foamy, and yet fairly bubbly off-white head, which leaves some stellar consistent cobwebbed lace around the glass as it lazily recedes.

It smells of pungent grapefruit, orange, and lemon citrus rind, dense caramel malt, hard toffee, and further muddled tropical fruit (ok, some obvious overripe pineapple), and herbal, strongly perfumed hops. The taste is dense, heady caramel/toffee/treacle malt, mixed fruity hops - local grocery aisle and more esoteric foreign climes duly represented in the form of orange, lemon, white grapefruit, guava, kiwi, and well, I could go on, but I'm sure you get the belaboured point. That big ABV is a pushy fellow, and manifests in an additional boozy floral morass.

The bubbles are pleasantly supportive, and little more, the body a sturdy medium-heavy weight, and smooth, creamy, and almost buttery (in the good sense), despite all those prickly hops flitting about. It finishes sweet, sugary, fruity, and hoppy - a very good thing, if you ask this guy (two thumbs already busy).

On the sweeter side of yer bigger DIPAs out there, but hardly lacking the complex hoppiness endemic to the style. Good on these particular Deutschlanders for getting the whole American thing right without some mirror world excuse. Up there with most of the best examples of the style that I've tried from, well anywhere, I gotta say.

A- pours a deep orangey hue with a 1.5 finger head that fades fairly quickly into off white lacing.

D- nice brew. Think the lingering resiny mouthfeel detracts a little for me but overall a very good beer.

Appearance - A semi- opaque orange amber color. Poured into a pint glass with a finger of head. A satisfying layer of foam stayed on top of the beer 'til the finish. Nice lacing on the glass.

Taste - A health dose of hops, but nicely balanced. It has a blog taste but doesn't wreck your pallet. A good IPA.

Overall - A tasty, well crafted brew. I must visit Crew Republic the next time I am in Munich.

poured from a 330ml bottle into a nonic

s - very fruity, not only citrus but overripe apples

t - a well balanced fruity malt explosion BUT almost no hops and only slightly bitter in the aftertaste (maybe I stored it a little too long?)

o - definitely a double IPA worth trying, but the brewers can get more from this style