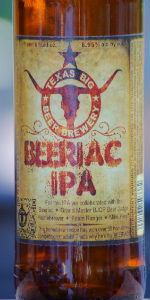 Bottle from local HEB market, drinking in my hotel room. This is bit big for an IPA, trampling on DIPA territory. Dark amber, copper body with creamy beige head and adequate lacing. Sweet malt nose, some apples, more malt in the flavor, hops linger in the background. Thinking not an IPA, but still loving the texture and flavors.

Aroma and taste remind me of my Vienna / Cascade SMaSH, but this beer's attributes are considerably more pronounced. The malt backbone is heavy, it's one of those "malty IPAs," not the west coast style (that probably explains the ratings so far, as anything not imperial stout or west coast IPA tends to be rated poorly by beer raters, regardless of the rating guidelines).

But really this beer is not particularly different from other breweries malty IPAs, it's got a very solid malt base, with caramel malt, biscuit, maybe a touch of rye bread crust, plus it's got hops, plenty of them,

I tend to think there's a lot of cascade in this beer, but my pallet is not by any means expertly attuned, so I could be completely wrong. But I still think there's cascade in there, and a lot of it at that, which is good because I like cascade. Can't pick out exactly what other hops might have been used, but there's not a single variety that stands out (again, in my less than perfect jedgment).

Also noted is that I detect a flavor that's overlapping with Queen's wheatwine. This is ok, I really like their wheatwine too, but wish I could specifically pinpoint what similar flavor I'm tasting.

The body is thicker than you'd expect, and the alcohol packs a punch. Overall I've enjoyed every one of Tx Big Beer's beers, and this one is no exception. It's in a separate category (at least if I did the categories, lol) which I tend to think of as "malty IPAs," and it's quite enjoyable.

Beeriac IPA from Texas Big Beer
Beer rating: 82 out of 100 with 18 ratings