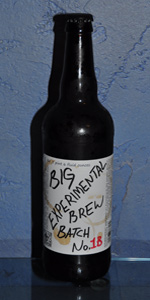 Tasted on 2/13/15. Poured from 650 ml bomber into a Liefmans Goudenband glass (my preferred all purpose beer tasting glass). Purchased at Wiggy's 11/2014.

Fairly decent Quad. Has a yeasty overtone that I find in beers that had poor temperature control during fermentation, and or pore storage conditions post bottling. For an experimental beer I would have liked a little more excitement and was slightly let down with it's limited complexities. however decent quad.

1 pint 6 fl oz brown glass bottle with unbranded black pry-off pressure cap acquired earlier tonight at an H-E-B grocery and served into a snifter in me gaff in low altitude Austin, Texas. Reviewed live. Expectations are average; I believe this is my second beer from this brewery and the first I tried - their white chocolate brew - was merely average. Per the brewery's website, this is 11.20% ABV, 44 IBU, and "It is basically a cross between a "Belgian Triple" and a "Belgian Golden Strong." If you had to force it into a single style it would most resemble a "Belgian Quad" or even bigger!" Oh boy...

HEAD: Pours a one finger wide head of white colour. Head retention is poor - less than twenty seconds. No lacing sticks to the sides of the glass as the head recedes. Below average thickness and creaminess.

It looks nothing at all like a quadrupel, but I suppose it's close to a Belgian tripel. But it doesn't look like a unique or special one by any means...

It's a generally pleasant aroma of average strength. I don't pick up on a distinct Belgian yeast character.

No alcohol or off-notes are detectable. It seems too sweet, and lacks the complexity and depth of traditional Belgian Tripel aromatics.

TASTE: Belgian pale malts, honey malt, golden malts, and floral hop notes. Sweetbread. Vague warm fruit. It's a pretty simple build, and I do find it too sweet - whether they're after a Belgian golden ale, a Belgian tripel, or just a good brew - but it's not unlikable.

It's decently balanced, though more of a hop profile (with more subsequent bitterness) would help tame that troublesome sweetness. Ultimately, it has a raw taste - a bit like tree sap or honey - and feels unrefined. There's some nice stuff here, but it never feels truly gestalt. It's got a loose cohesion and a general focus, and boy does it hide its ABV well, but it isn't subtly executed or intricately built.

TEXTURE: Sticky. A biteen too thick, but in fairness it's got a lot of sugars. Smooth, wet, and lumpy. It has too much heft and weight on the palate considering its shallow flavour profile.

OVERALL: Clearly they started with the wrong aims, and I'm starting to think the brewery itself may suffer from the same issue - making beer "bigger" does not make it better. This does hide its 11.20% surprisingly well, but the beer suffers from a lack of focus and a misguided emphasis on "bigness." I'd hate to see a Texas brewery follow in Stone's footsteps; balance is integral, and there's more to good beer than big flavours and high alcohol. I'll finish the bottle, but I find myself wishing this was a 12 oz format instead. Regardless of what style they may have been after, they missed the mark. I've had worse and I'd like to see this brewery mature, but I wouldn't recommend it to friends or trade partners.

Turbid yellow/tan with a great head that didn't want to go away. Aroma pretty belgian-esque, flavor is even more forward than the nose, spiciness and pepper, belgian yeast, some bready malt, and a significant sweetness that's also pretty forward. No idea as of yet what went into this beer, but it's not too far off its assigned category of quadrupel, and it's complex with many flavors.

Body could be a little better but otherwise isn't far off of a damn good quad body. Finish is a little sweet but overall I really like the beer.

Big Experimental Brew Batch No. 1 from Texas Big Beer
Beer rating: 88 out of 100 with 14 ratings