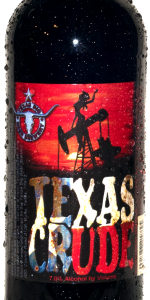 Picked this up when driving through Galveston. Didn't get much carbonation on the pour. Taste is sweet caramel with some smokiness. Mouthfeel is pretty light, but smooth aftertaste makes this a great beer.

Watch out when you pour! Foams up like crazy.

Once the head subdues though it looks really nice in the glass. Aromas of coffee are present.

I must have had a weird bottle because the combination for me was ridiculous! Like drinking soda almost.

Once that subsides though this is a solid porter I would try again. Taste is amazing and does not have the watery feel some porters do. If it weren't for the carbonation, I would rate this one better.

Poured from a 22 oz bomber into a pint glass.

Great name, as this poured a jet black stream into the glass with a thick tan head. The head was fizzy at first, more like a soft drink head, but settle into a giant foamy head that lingered, but didn't leave any lacing.

Smell is mostly burnt/roasted malt. I know there were hops there, but I couldn't pick them out as much as I expected.

Taste was good and improved as it warmed. Early, it was all roasted malt and coffee with some dark chocolate, but as it warmed the dark fruit and hoppiness appeared, which was nice.

The mouthfeel was about perfect for this style as many end up too watery.

Not my favorite beer, but enjoyable. I am used to the more English Porter style which is a little less roasty tasting, but this one grew on me.

Appearance was something a bit more like an imperial stout than a porter, although I'm not sure how much that is really going to matter here. The color is jet black without room between any two molecules of inky blackness for light to pass through. The head was about a half a finger and was lightly brown, but didn't last too long. There was ample lacing in thin sheets as the head went down.

The aroma was initially roasty, with a little burnt malt as an accent, and some subtle dark fruit notes. There was also some sweetness, brown sugar and molasses come to mind.

I think the taste was considerably more bold than the aroma. There's a real nice dark malt and roasty malt component that's up front, with side notes of coffee, chocolate, and just a tinge of burnt malt character. Sweetness is also a major component of the flavor, with a real nice brown sugar component, with a touch of blackstrap molasses as an accent. My take is that the chocolate component is more of a milk chocolate one than a dark chocolate one, and I don't taste much of the semi-sweet baker's chocolate flavors that I sometimes get from stouts or robust porters.

I rather like the mouthfeel. It's not real heavy or thick, but isn't overly watery or too thin either. The medium mouthfeel is well suited for this beer's flavor and alcohol profile. And by the way, I really can't taste or smell any alcohol in this beer.

My overall impression is that this is a fine porter, and having tried it, I want to try more beers from this brewery.

The bottom line is that a local brewery has produced a fine and tasty beer which is available for sale in my local area stores (at a reasonable price too!). Anytime someone can buy local beers from local breweries, it's a good day for us all. Support local breweries and businesses. For me that means picking up another variety of Big Texas Beers next time I'm near the liquor store.

This is my first Texas Big Beer Brewing beer, their Texas Crude. My local place, Midway Mart in Denton, TX, got in some earlier this week and I'm always up for trying out and supporting new microbreweries, especially if they're from Texas. Since it's "winter" here, I chose their porter to be a dark and (hopefully) robust brew to satisfy me on a cold night. Here's to new beer!

This looks like a good beer right off the bat. It's intensely dark. It's not quite pitch black and holding it up to a light didn't reveal any change in color, so it's an opaque black throughout. The head took a little longer to form than I expected but after tilting the bottle a bit more I soon got a three finger creamy brown head with nice retention. The bottom of the head touching the beer was more bubbly. I get little to no lacing, however, and the head fizzed itself out pretty quickly. Still, it looks dark and delicious.

I could smell it as soon as I poured it. Dark, rich, and roasty malts were first to be noticed. Dark chocolate and roasty coffee are dominant. It's pretty sweet too, like dark brown sugar and molasses. Dark fruits like fig and raisin is less noticeable but evident. Booze aroma is there too much nicely hidden.

This is certainly a robust porter. It's at least much more roasty and packs more of the dark chocolate and coffee flavor than most porters that tend to be more on the dark fruit side. This is my type of porter (or stout). I'll admit that I'm a sucker for things roasty. Letting this warm is a good idea or else you get mostly lingering roastiness late in the taste and not much else. Up front is more of the cereal maltiness and dark fruits that I mentioned but they're not the highlight. Hop bitterness is barely worth mentioning. Later on comes some coffee/dark chocolate bitterness along with the dark brown sugar/molasses sweetness. Even later comes the delicious lingering roastiness. They obviously went heavy on the chocolate malt. I wish it was a bit more balanced in flavor, honestly, but it tastes good.

This is on the lighter side of carbonation which makes it go down really smooth. The mouthfeel is medium too which helps a lot of drinkability. Goes down easy.

I'm impressed by my first Texas Big Beer... beer and want to see what else they have. While I wish there was a bit "more" to this beer with complexity, it's still very tasty and a flavorful porter that is still very drinkable. I deflinitely recommend it.

Texas Crude from Texas Big Beer
Beer rating: 83 out of 100 with 36 ratings