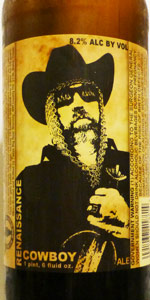 A decent scotch ale, reminds me a bit of Belhaven's standard scotch ale. Could be stronger and use more malt and peat smokiness. Wouldn't purchase in a bottle again but would have if on draught in a bar.

Appearance:
A bit off for a wee heavy, the body is a deep reddish/brown color (more in line with a amber ale in a darkly lit place) and is with only a few hints of copper, almost no head was produced even with a heavy pour and there’s no lacing either.
Smell:
There’s a mild alcohol aroma mixed in with a fruity background and nothing else.
Taste:
Caramel, roasted malts very little hops and a slight bitterness towards the edges of your mouth as you swallow. A little banana bread come up and it is sweet over all. Not bad tasting, but a little tame for the style.
Mouthfeel:
Medium to light bodied, it does coat your mouth well and it is smooth.
Overall:
Not a bad ale, not a good representation for the style but very drinkable.

Expectations are low given the brewery, so this review will be truncated (unless it turns out to blow me away).

8.2% ABV. Reviewed live as a wee heavy per the description on the label. Served cold into a pilsner glass and allowed to warm over the course of consumption.

HEAD: 1 finger in width. Off-white with pale khaki hues. Creamy and thick enough, but not particularly luscious or soft. Leaves an uneven coating of lacing as it recedes.

BODY: Dark amber-brown. Dull but translucent. Has no visible yeast. A deeper richer hue would be better. It's also not as dark as the best beers I've come across in the style.

Decent looking for the style. Has no stand-out characteristics, and it isn't special.

AROMA: Pecan, caramel, cream. It's malty and bready, but doesn't seem cloyingly sweet by any means. It hints at marshmallow but never commits, to its detriment.

I'm not getting any roast or toastiness here, nor are there graham cracker or toffee notes.

It doesn't seem like much of a wee heavy, but there's nothing egregious; at least it's not hoppy or yeasty. As much as they market this is as a "big beer" it's rather tame for a wee heavy, lacking the robust malt aromatics of stronger beers in the style. Aromatic intensity is merely average.

TASTE: Hm. Brown malts, caramel, fleeting hints of caramelized nut (some pecan, maybe cashew), and...that's about it. It's a bit bready and some malty sweetness, but if you're hoping for marshmallow, roast, toastiness, toffee, graham cracker, or frankly any other notes that would be of interest, you've come to the wrong wee heavy. This is a generic build for a wee heavy, lacking anything that would set it apart.

I do like the caramelized nut hints, but they're too reticent and closed-off to be of interest. If they committed to that, brought in some roast, marshmallow, and toffee, and refined the balance (mainly by checking the sweetness with roasty bitterness), this might be a decent brew. As-is, it's dull and tough to like, and barely ticks the boxes needed to qualify it as the intended style. Shallow, with a brief flavour duration and (luckily) mild flavour intensity.

This might seem "big" to those who drink only macrobrew pale lagers and malt liquors, but to the discerning drinker, it's just imbalanced and painfully simple.

TEXTURE: As meh as the taste. Kinda smooth, kinda wet, medium-bodied, kinda dragging, a biteen scratchy...it's rough around the edges, and has a poor overall presence on the palate. Luckily, it's not boozy or syrupy, but it is a bit sticky and has some unnecessary alcohol warmth. Other beers in the style push the ABV higher and have less warmth than this.

Doesn't elevate the beer, nor does it accentuate any notes in the flavour profile. Overcarbonated.

OVERALL: This is on par with Texas Big Beer's other beers, which is to say it's underwhelming and generic. It doesn't hide its ABV all that well at all, and isn't all that pleasant to drink, nor is it refreshing (not that it should be). I try to give every beer a chance, but this brewery's other offerings will be at the bottom of my to-buy list going forward. I've had better offerings in the style from novice extract homebrewers.

Pours out a hazy raisin color. Smells of dates, sugar, and toasted malts. Pretty one note. VERY sweet. Caramel-ly malts have a strong presence throughout. There's a slight bitterness in the finish, which I appreciate. One thing that holds strong from the initial taste until the aftertaste is that of grape soda. I get some roasted malts, some toast, and chocolate, but that grape soda flavor ruins everything for me. What is that? I'll give it up for the mouthfeel Pretty solid. Creamy with a little prickliness on the tongue. I can't hang with this grape drink. Drainpour.

Mouthfeel- Moderate heft, slick, coating. Low carbonation. Dry-ish finish, but definitely a sipper. 8+% isn't offensive, but this is definitely not a session-able ale. ~14 oz was enough for me.

Overall- Pretty good, different enough to keep it interesting, Above average for an English-style Texas ale

Well I'm pretty happy with this beer already. I'm not a big fan of wee heavy / Scotch ales, but several people said I should still try this one anyway. So I picked up a bomber and gave it a try. I have liked the two other beers I have tried from this brewery so far, so it was worth a try.

Appearance is good, a good light brown head caps a somewhat amber-brown to almost red and pretty much clear beer.

Aroma is about what I expect from this style, heavy malts along with brown sugar, molasses and dark fruity notes. The flavor fits this profile too. Sweetness is medium and notable, There's not a lot of outright hoppy flavors, but there's a pretty good bitterness that's plenty noticeable, and IMO balances it out better than some Scotch ales I've tried.

Body is medium and slick, with a sweet, malty base and a brown sugar finish. It's actually pretty enjoyable, and I'm going to give it a good rating. For me, this isn't a style I'm real fond of, so if this beer is this tasty to me, it must be good! I think it fits the style pretty well, although this beer probably overlaps with barleywine quite a bit (it's kind of like a pretty sweet and not hoppy barleywine that's bittered for balancing bitterness only, not for a huge hops profile).

Dark reddish brown in color. Big foam but leaves lots of lacing in the New Belgium snifter. Smells like fresh hay and an old suitcase. Richly flavored and quite sweet. Pleasantly sudsy in the mouth.

There is an earthy, woodsy flavor, but this is not the smokey sort of Scotch Ale. A funny fruity flavor, like Hawaiian Punch and red licorice. Overall this tastes more like a Barley Wine. Gets surprisingly bitter after some sipping. Faintly medicinal, but the sweetness stays til the end. From the 22 oz bottle bought at Pig Liquors in San Antonio.

Aroma: Not much going on here. Roasty malts (coffee-like) and an aroma reminiscent of chocolate.

Taste and Mouthfeel: Whoa! It starts off malty sweet, in the middle you taste the unbelievably creamy and smooth body, and the finish is crisp and dry. Low hop bitterness and virtually no hop aroma. I've never had the opportunity to sample diacetyl before, but I believe this beer has a low level of that "buttery" flavor that diacetyl manifests itself in (which is acceptable for the style). Earthy and medium-high bodied, almost full bodied.

Overall: Hides that 8.2% alcohol VERY well. This has to be the creamiest, and possibly the smoothest beer I've ever drank.

Renaissance Cowboy from Texas Big Beer
Beer rating: 82 out of 100 with 36 ratings