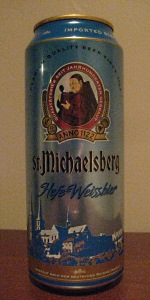 L: gives of a cloudy orange color. Decent top of head that disolves quickly.some lacings on the glass.

S: wheat, banana is very noticeable. Honey, spices like cloves. The aroma is very sweet for this beer style.

T&F: start of with the fruity banana flavour,with the sweetness of the wheat in the background. In the middle I sense more of the spicy notes while it still have that sweetness to. Sweet and bitter finish, very watery taste and mouthfeel, very little crisp in the mouth, aftertaste very weak.

O: an ok weisbier but not much more than that. Boring flavour , not close to a topshelf weisbier. Probably not going to buy this again

500ml can, day 15 of the Costco Canada 2014 Beer Advent calendar. This seems almost like a beer without a real home.

This beer pours a cloudy, murky, yet bright medium golden yellow hue, with three fingers of puffy, loosely foamy, and bubbly off-white head, which leaves some thick swaths of island cave lace around the glass as it evenly subsides.

The carbonation is actually evident in its frothy emanations, the body an adequate middleweight, and generally smooth, with a slight airy creaminess arising as it warms. It finishes on the sweet side, the sugary wheatiness and lingering mature banana esters holding firm.

A sort of plain, but otherwise agreeable version of the style, nothing really standing out, save the kind of overstepping sweetness. In the end, it doesn't really matter a whit, as drinking a hefeweizen in the middle of December when it's minus 10 and there's a foot of snow on the ground, offers little of what I'm looking for right now.


St. Michaelsberg Hefe-Weissbier from Vejle Bryghus
Beer rating: 3.3 out of 5 with 6 ratings