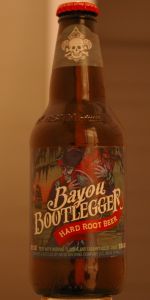 Notes: Bayou Bootlegger is a decidedly adult take on the old-fashioned soda fountain root beers of days gone by. Gluten-free and sweetened with pure Louisiana cane sugar, this handcrafted beer delivers aromas of wintergreen, vanilla and sassafras, with hints of clove and anise. Enjoy its smooth, complex and satisfyingly sweet flavor as your go-to thirst quencher or paired with your favorite meal.
View: Beers | Place Reviews
Reviews: 17 | Ratings: 61 | Log in to view all ratings and sort

Thanks to Small Town, Sprecher, and the rest, it looks like hard root beers are gonna be a thing. Sweet. This one pours a clear amber-tawny topped by a half-finger or so of taupe foam. The nose is straight indicative of root beer, maybe a touch sweeter than usual, some mild anise in the back for good measure. The taste brings in more of the same, a sweet root beer with some clove and allspice and anise bits here and there. The body is a light medium, with a light moderate carbonation and a slick-ish feel. Overall, a solid hard root beer. 'Nuff said.

In LAUREL.
I only purchased a single bottle as part of a make your own 6 pack offer.

LOOK: Pour looked identical to the Root Beer days of my youth when A&W was widely available if only occasionally the soft drink choice. Poured near black in color with a brown foamy head that slowly faded.
AROMA: 100% A Root Beer Match, with Root Beer aroma having a touch of clove and vanilla.

TASTE: Flavor and taste was a Root Beer match as well. Sweet, too sweet at this age. Label says it has PURE LOUISIANA CANE SUGAR . For me the clove is unwanted since clove goes straight to my frontal head giving me a light headed headache feeling.
My scoring gave the benefit of the doubt, since this HARD Root Beer did a superior job of creating a true old fashioned Root Beer feel.

Poured from a brown 12 oz. bottle. Has a damn near black color with a 1/2 inch head. Smell is strong of root beer. Taste is syrup, root beer, very sweet. Feels medium/full bodied in the mouth and overall, while I enjoyed this, it just doesn't feel like a beer. One is enough for me.

The look is so crazy! Looks like I just poured a nice frosty mug of root beer. Dark color with a nice frothy brown head that will stick all the way down the glass.

The smell threw me back to my childhood! Straight out of the fresh ass A&W Root Beer shops we used to go to. I can actually picture that same damn location off of Sheridan Av. just by smelling this.

The taste is the same as the smell! Holy crap Batman I think I am going straight back to my childhood! Taste is just like that classic [email protected] root beer.

Mouth feel seems to be a bit off of the classic root beer I am imagining. Seems to be a bit maltier, if that is a word. And the thickness tosses it off just a bit. Finish is wet and slick.

Wow! I really went back to my childhood with this one. This seems to me to be a very fine root beer from the folks at Abita. With the addition of the 5.9% alcohol this one land in that adult beverage category. Yet to be billed as a beer this one really does tend to confuse me. Well screw that! I am going to enjoy going back to an earlier age with this fine beverage. Cheers BA bro's!

Bought a single 12-ounce bottle as part of "Make your own 6" at the local grocery store. 5.9% AVB. Bottle chilled down to 36 degrees F in my beer cooler and poured in to a 10-ounce "MOVIE NIGHT" pilsner glass. Pours just like any other decent root beer with a good foamy cap. Aroma is like a Sarsaparilla than a root beer actually. Taste follows the nose and is very easy to drink and don't taste booze unlike some other hard root beers. medium-bodied with lower carbonation. Not as sweet as some of the other ones on the market today. Overall probably my favorite hard root beer to date and perfect in every way for what it is.

Drank from the bottle. Didn't see the color, but there was decent carbonation and foam. Smells more like Sarsaparilla than root beer in my opinion, but the nose is spot on. Tastes like root beer without the stickiness that lingers from a cheap soda. Light body and medium-light carbonation with no trace of alcohol.
Kinda surprised this was on here given this isn't beer. It's spiked soda, and a good spiked soda, but not really beer. Refreshing for summer either way.

Not bad...like all the other hard root beers...just in a cooler bottle. If you're having a card game with your bros and Ronald Miller don't show cause he's out with Condy Mancini again...this is your drink, dawwg.

A - 2 fingers of medium tan stick around a lot longer than usual for a root beer; deep brown/black body with ruby highlights; a few small patches of lace stick around

S - wintergreen and bubblegum; smells like a better-than-average root beer

O - When I review a hard root beer, I take into account that I'm basically reviewing an alcoholic soda. This one, however, was not so over-the-top in either sweetness or carbonation as some of the other hard root beers I've tried. This one even managed to retain a head for a reasonable duration. Still basically a soda, but this one's more interesting than others.

Poured into a Lagunitas mason jar.

S - Definitely a distinct aroma compared to others also. Notes of vanilla extract, but a mossy / earthy aroma is in there also, which must be attributed to the wintergreen & sassafras. Interesting stuff, if perhaps a tad off-putting.

Look: Very dark brown, settles black in the glass. Hard pour resulted in a one finger tan head that fizzed down into nothing.

Feel: Just like the soda; smooth and carbonated. Medium bodied,

Taste: Rich vanilla and sarsaparilla flavors, and not overly sweet. Pretty spot on to the real deal.

Overall: Out of the alcoholic root beers I have tried, this is probably the closest to the actual soda; not cloyingly sweet, and lacking the medicinal aspect. I even opened an A&W root beer to compare this to side by side.

Friend brought this to me from Louisiana along with some boudin. Pours a super dark brown with no head. Smells spicy and sweet. Tastes of anise but isn't overly sweet with solid carbonation I prefer this over Not your fathers. Not too sweet, not too much anise. Would drink again if feeling froggy.

Pours clear, dark brown in color, with 1/4 inch head that does not last long.Taste is root beer with hints of winter mint, and light vanilla at the end. Clean and better than a large majority of the soda beers out there. Not something I would get on a regular basis, but if I wanted a soda beer, this is is one I would go to. I think I prefer Abita's non-alcoholic root beer better though.

I know that people may be getting tired of me mentioning my Bottle Backlog here at Chez Woody, but it is getting winnowed down with every review, including this one. Also, in case Hard Root Beer isn't your bag, you might be interested to know that Abita also makes a caffeine-free non-alcoholic Root Beer with pure Louisiana cane sugar!

From the bottle: "Our Hard Root Beer is a decidedly adult take on the old-fashioned soda fountain root beers of days gone by. Gluten-free and sweetened with pure Louisiana cane sugar, this handcrafted beer delivers aromas of wintergreen, vanilla and sassafras, with hints of clove and anise."

I will get a pic & have it uploaded before Mardi Gras 2016 is history, but for now, I want to get started.
I Pop!ped the red cap & gave it a vigorous pour since this is my party! This garnered three fingers of dense, deep-tan/light-brown with good retention. A swirl after it fell raised a finger back up as well as releasing strong wintergreen notes. Nose was redolent with wintergreen as well as a hot tar-like sharpness that was either/both sassafras and/or anise. Lots of root spices, certainly! Color was Dark Brown to Very Dark Brown (SRM = > 27, < 34) with NE-quality clarity & garnet highlights. Mouthfeel was kind of thin & watery, fizzy, like pop. The flavor was a wild mélange of spices: definitely wintergreen and clove, underlain with vanilla and notes of that tarry flavor that I am attributing to the sassafras/anise combination. It was better tasting than it smelled, believe me! It was a much spicier Root Beer than their N/A version, which I opened for an impromptu Mardi Gras side-by side. Frankly, I'm glad that I did since Bayou Bootlegger was one of those for which a little was going a long way. Every time that I raised the glass for a sip, I would get a blast of that sulfuric nose and it was becoming off-putting. Also, the pure cane sugar was making for a really sweet, sugary drink & I have never been a fan of them. In fact, the finish was semi-sweet, which was really surprising, given all of the spices. I kind of expected it to be at least semi-dry, but the inherent sugar was just too much to overcome. I hate to be hard (no pun intended) on a Root Beer, especially since I am not likely its intended audience, but I was not digging it.

12oz bottle. Poured out a semi-opaque, cola-brown color with a fizzy, white head. Smelled like a ginger and sweet caramel. Very sweet. Tasted pretty much like root beer.

Poured from a 12 OZ bottle into a pint glass. The appearance is a clear dark brown color with a small white head. The taste is pure sassparilla. The aroma is that of traditional root beer.

Abita Bayou Bootlegger has a thin, beige, quickly-dissipating head, a root beer-brown appearance, and some lacing splotches clinging to the glass. The aroma is of root beer, period. The flavor is the same- root beer, with a wintergreen note (as stated on the label), but I did pick up a bit of a chalky under-taste. Mouthfeel is medium and a bit slick, and Abita Bayou Bootlegger finishes sweet.

I was excited to see this as I think the regular Abita is fabulous. I have had the other hard root beers out there so I was excited to seen how it was. Smells average but the taste is where this beer started pulling away from the competition. The carbonation was nice just like the actual soda. This beer didn't have the funky chemical after taste and didn't detect any alcohol, which is dangerous. The only complaint was sometimes I did detect some maybe yeasty after taste but that didn't really affect it. I was happy to try this and come summer it will be in my fridge for the hot days. Well done Abita.