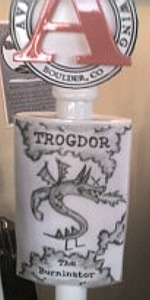 A - dark brown, 1 finger of head and some tan lacing

O - A doppleback, not my fave style. Pretty good version however

Pours a hazy dark chocolate brown color with chestnut edges and a one finger beige head that slowly fades into a lasting ring.  Streaks of soapy lacing left behind.

Meaty, smokey aroma but not as much as I prefer.  Smokey charcoal/ash, wood, and some burnt malt but kind of tame in the smoke department.  Lots of sweet and roasted malt character with hints of caramel, toffee, toast and chocolate.

Medium bodied with a decent amount of meaty smoke. More prevalent than aroma suggests with hints of charcoal, bacon, BBQ and burnt malt.  Underneath there is some sweet and roasted malt flavor with hints of caramel, toast and toffee.  Slightly dry finish.   Nicely balanced with nice smokey flavor.

This beer is listed at 7.0% in the taproom now. Don't think it is actually 9% anymore.

There is always something new and interesting at the Taproom, but their ability to consistently knock it out of the park is so impressive. This was a great example of that.

APPEARANCE: A thin, quarter-inch head topped the 16oz. pour from Matt at the taproom. It receded rather quickly and underneath it left a deep mahogany colored beer that was much darker than expected. It was a bit hazy, but not too much.

SMELL: Wood chips and smoke. This was a gorgeous aroma, but it could stand to have been a bit stronger.

TASTE: Smoky with a slight dose of bacon. The smoke dominates and makes this a very mellow beer. A slight malt-flavor kicks in in the end, providing a nice little dose of sweetness, but ultimately this is a dry beer.

MOUTHFEEL: The best way to describe the feel of this beer is ticklingly sparkly. It is thinner bodied than I would expect from this beer, but still full of flavor. As I mentioned above, it is very dry until the very tail end where a kick of sweetness comes in to play.

OVERALL: Avery nails another style. In fact, they nail the style then take it in a uniquely Avery direction. That's what happened here.

The full name of the beer is Trogdor the Burninator.

Strong malty aroma with hints of bacon and sweetness. Didn't detect any specific smoke aroma. I'm assuming that's where the bacon is coming from though.

Malty sweetness with pleasant hop finish. Very, very little smoke flavor - almost to the point of me thinking I'm only tasting smoke because I know it's a smoked beer.

Overall, a great beer, but it left me wanting more smoke flavor. I would have scored higher had it not been sold as a smoked beer.

This is a smoked Doppelbock that Avery is going to age on Grosling rum barrels.

Pours an amberish brown with a tan head. Nice lace.

The smoke presence is light in the flavor as well so it shouldn't get in the way of the flavors from the barrels. Lots of sweet malts, carmelized candies, figs, plums and nuts.

Full body is well carbonated. Tasty stuff, will be very nice after the barrel aging.


Trogdor The Burninator from Avery Brewing Company
Beer rating: 86 out of 100 with 60 ratings