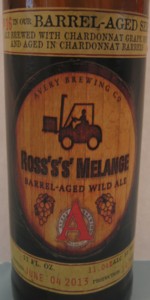 L - Cloudy orange/yellow hue. No head or lace (it's old!)

S - Grapes, chardonnay, citrus, and oak. I imagine this is what a chardonnay barrel smells like

O - This brew is as close to chardonnay as a beer can get. The wildness adds a kick. Awesome brew!

Had from a bottle on May 20, 2017 at stone brewing. This beer has aged exceptionally well with the oak and Chardonnay flavors imparting a remarkable color, smell a texture...likely a crisp buttery Chardonnay on a summer day.

Bottle from the cellar at Patrick's Irish Pub in Greeley

L: Pours a Hazy gold yellow, with almost no head or lacing.

S: Lots of wood, some Brett, grapes and white wine

A - Pours a hazy light orange with a fizzy white head that fades fast.

Taking a lot of ownership, Ross must really like dry white wine because like the beer's name suggests, the chardonnay character owns this beer!

Bright, like bubbly chardonnay- the light straw beer proudly shows off its streaming carbonation to form a cottony-white cap of foam. Its racing appearance is near brilliant despite a modest haze. Its fizzy-fluffy retention reforms with a gentle swirl each time right down to the last sip..

The sharp and tangy aroma of chardonnay also commands the nose as white grape, green apple and a mild lemony sulfur note wafts about. A crisp bread note is short as is quickly overtaken by the fruity and fermented acidity. Cork-like in character, a musty and woodish aroma rises and captures the senses like sea air and damp hay.

In similar fashion, the taste of chardonnay takes center stage on the palate as those tangy, tart and semi-sour flavor layer upon the tongue- white grape, lemon, apple, under-ripened berry all reinforce a dry vinous taste. However, a wafer-thin cracker taste supports the vinous taste with its own terse bread sweetness. But a quick finish ensures a piquant souring with cork-like must, dry oak, and a pleasant brine character.

Its dry and light body is aided by its unsurprising champagne-like carbonation. Its high effervescence lifts the malt sweetness and exacerbates the beer's tartness, mineral and peppery character. A fleeting finish of powder and wood spices once again affirms the ale's wine-like tone.

Ross' winy thumbprints are all over this beer. Even as this saucy elixir turns its back on its beery roots in favor of the vine, there's enough of that unique Belgian-esque sourness to relate to the puckering taste that I love so much in sour ale.

Pours a fairly clear lemon straw with a modest ivory head that dissipates to nothing.

Aroma is green grapes and oak, with a hint of sourness.

Flavor is reflective of aroma, but with a touch more must. Phenolic funky notes emerge.

Body is moderate, with modest carbonation and light alcohol warmth.

Not a big chardonnay fan, and I like my beer to taste less like wine, but this is a very drinkable beverage.

A - Light golden apple juice color with no head

S - Smells like a sweet Chardonnay as it is dry, oaky and slightly buttery

O - This is essentially Chardonnay as it reminds me of a dry white wine with apple, oak and dry, slight alcohol