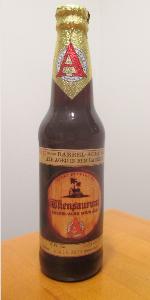 Another beer from March Madness 2018. Goes in with some trepidation, not really a fan of double digit abv sour beers.

Pours a color similar to oud bruin/flanders mashup. Brownish dark red. Fails to amass a head. Ooof, here we go I thought.
A woody, sour, boozy nose, plenty of acetic acid, so I'm still looking at this like its a Gilgamesh from Upland (translation: boozy imperial oud bruin/flanders).

Surprisingly, this wasn't that sour, below average, and that actually helps given where I thought this beer was going. There isn't much in the way of rum flavor, aside from the booziness and slight wood impact. Still plenty of vinegar notes. The mouth feel develops a slight bit of complexity as there is a light leather aspect to it. Somewhat contradictory, the sourness is low but the acidity is high(er). The rum component seems largely a way to get a high abv beer and not let the bacteria do its full fledged souring thing moreso than actual taste. Too boozy for me to care for another, especially at around $1/ounce. One and done.

L - Brown with reddish tint, 1 full finger of head and some nice lacing left all over the brew. Impressive for a beer that's now 4 years old

O - Pretty much a perfect sour. Rum is very subtle

10.89% ABV. Expectations are moderately high - I love Avery's sours when they're done right, but why must they always make the ABV sketchily high - and will rum barrel notes really complement bacterial sourness? Reviewed live as an American sour ale per the label.

Served cold into a teku. Allowed to warm over the course of consumption.

HEAD: 1 finger wide head. Pale khaki colour. Decent creaminess, thickness, and fullness. Retention is average - about 2 minutes. No lacing sticks to the sides of the glass as the head recedes.

BODY: Dark amber colour. Could have more depth and vibrance. Clean; no yeast particulate is visible.

Appears aptly (under)carbonated. Not unique or special for a sour, but appealing.

AROMA: Lightly acetic, with traces of pie crust in there. Has a neutral malt base which lends little sweetness, if any. Cream. Faint bacterial character (pedio and lacto). I don't pick up on any overt rum or sugarcane notes, but there is barrel character comprised of suggestions of wood (though not evocative oak) and...something I can't place. Perceived sourness is quite low, actually, maybe a 2-3/10. It's not tart at all. Nor is it fruity. But the slightly Rodenbach-esque acetic character is a stand-out.

No hop profile, biscuity yeast character, or off-notes are detectable.

TASTE: The acetic character comes through in the taste, and the sourness does pick up - amounting to a 3-4/10 in terms of intensity. I do get pie crust, but not as much as I'd like (see Rodenbach). Bacterial notes are present throughout, but more intensity is needed...why is the ABV so damn high? Why not tone down the ABV/initial malt sugars, go with lower attenuated yeast, and let the bacteria run amok as it should? Why is Avery so damned obsessed with unnecessary high ABVs? The rum barrel character isn't very evocative, but I count this as a good thing - Jamaican rum and sweet sugarcane notes just wouldn't jive with the bacterial fermenters, and I can't see coconut or toastiness working well either. A dampened wood tone ties the beer together, giving it cohesion.

As it warms, notes of green/crab apple, must, faint leather, oak, and vinegar emerge. The leather in particular is apt, and really aids the flavour profile.

Overall, I find it subdued and reticent to its detriment. The alcohol, while shockingly well disguised, still affects the beer negatively; this isn't as alive a beer as it should be, and I can't help but blame the high alcohol content for killing the bacteria prematurely. It's a balanced build, but never comes off gestalt. Complex and subtle enough, but of course there's room for more intricacy. I really like it, and it's a minor success in the style, but with work it could be great. Above average depth of flavour. Average duration and intensity of flavour. Good flavour amplitude.

No hop profile comes through, nor does any overt alcohol.

TEXTURE: Has a full and aptly weighty presence on the palate without coming off heavy, burdensome, or overbearing. It's well-carbonated - perhaps even overly so. It's smooth and wet. Could be softer and more delicately handled. Overall presence on the palate is good. This texture doesn't elevate the beer, but complements the taste well. Still, it doesn't feel custom-tailored specifically to the taste and could use fine-tuning. What really works here is the leathery feel; it's incredible.

The acidity is well above average, but I'd like to see them push it more.

OVERALL: A well-executed sour from Avery, but by no means a world class brew. The acetic character is a stand-out, but it's been done far better in other beers. I'd nab this again if it wasn't so damned expensive. If you were hoping to see how prominent rum barrel character affects a sour ale build, you will be disappointed; Avery didn't commit to the rum barrel here. Very drinkable - shockingly so for the ABV. Worth trying once, and a welcome addition to Avery's wild ale roster. But it won't impress the discerning drinker.

Drinks well from a teku.

Bare acidity, and just a bit of sweetness.