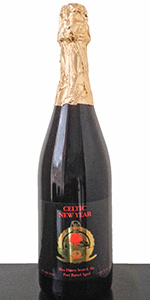 beer generously shared by evan12 at the southampton IRS release. enjoyed at the release and leftovers enjoyed at home from a blue lobster mini. notes a result of both impressions.

a - brew poured a fairly still muddy brown with not much on top. not all that attractive.
s - nose boasts scoatch ale toffee and a nice amount of seasoning spices.
t - taste is more of the same. at first a very sweet scotch ale with big toffee notes, but washed over with some sage and white pepper spicing. very festive and very autumn. almost too much so. a bit tart, perhaps over oaked as the vanilla shines through big time.
m - easy drinker...carb is weak. this should've been brewed before the head brewer left, but still not all that impressive. folks at the release who have enjoyed others seem to feel that this is not a great representation of what they are/were capable of. at the end of the day this is a seasonal and autumn at that beer that is good, but not great. perhaps i missed the boat on this brewery, but if this was what was brewing before all the drama, then i don't really get what all the hub bub is about. this is a style i love and this, although unique, beer is not a good sample of the style.

It pours mostly brown with a few copper hues and a slight haze building up to an off-white head.

This was aged in wine barrels and whether that is good or bad, the winy aroma is the leading scent on the nose followed more distantly by the malts.

But the taste is a slightly different story. There is still a little tart, grape, wine note but this time the malts introduce themselves more so and it ends with a low bitterness. Alcohol is well integrated into the beer on the whole and this is highly drinkable.

The beer pours a deep and malty ruby-brown with a small, 1/4th of a finger’s head of creamy, fine, sand colored bubbles. The head doesn’t last long but does leave a nice ring and a lacing of thin, small bubbles in patches across the glass. Some legs can also be noted as the beer moves up the side of the glass. In body, the beer is nearly opaque in darkness, but clean of particles and very clear in the light with just a malt haze blurring the other side of the glass. On the nose, the beer smells cider-like and vinous with syrupy malts and caramel dancing beneath the initial run of port on the nose. As I stick my nose in it, there is a touch of earthy peat smoke. The port wine plays over into big fruit with mild fruit esters coming through as raisins and dates. Light fusel alcohol can be barely sensed, and the port wine gives off distinct honey scents, alongside sherry-like oxidized notes. On the tongue, the beer is big and sweet, running from fruity, port-sweet to big malty sweetness. A touch of herbal bitterness enters at the middle and end of the sip, and does grow a little as the beer is sipped. The herbal bitterness is paired with a middling, oaky tannic bitterness from the barrel. Acidity is light to non-existent on the palate. In flavor, the beer is rich with caramel malts and huge, honeyed port flavors. Rich brown sugar mixes with a bready caramel and a touch of earthy peat smoke while slight saltiness even comes into some of the sips. Sherry and cider flavors play out in the middle of the sip, moving into herbal bitters with big, bready caramel which powers into the finish that is full of oak tannins with touches of vanilla and a nuttiness from the malts. The finish lingers on the tongue, like a port wine might, sticky and honey-sweet with more touches of nuttiness. In the mouth the beer feels medium plus in body, with smooth and middling carbonation and a velvety mouthfeel that is touch chewy and syrupy. Some heat from the alcohol does touch the mouth, and the beer does hit some astringency from the tannins and bitters. At the start the beer is a touch sharp, but it does smooth out as it warms. Overall, this beer is a wonderful sipper, which rich malts and a great addition from the port barrels. I do wish a little more of the original beer’s peat smoke made it through, but as is this beer is rich in port characters, which go very nicely with the beer. Great complexity, and nice balance. With age, the bitters of this beer will mellow out and it will become even richer with malts.

750ml bottle purchased at the brewery a week or two ago. Supposedly less then 250 bottles produced. Blue Lobster's first ever bottle release to celebrate their one year anniversary- scotch ale aged &gt;8 months in port barrels. Served around cellar temperature. Consumed right after a '12 Backwoods Bastard.

A- Pours a dark cherry brown with some translucency around the edges, towards the bottom of the bottle a little bit more haze is prevalent. Fairly faint head presents itself that fades fairly fast (better then Backwoods which was almost flat), lacing slowly slides back into the glass, head fades to a flat top leaving just a ring along the edges.

S- Fairly cidery- fairly unique for a wee heavy but not in a bad way, port presents itself on the backend, slight oak hiding in the background with faint hints of vanilla that balances nicely with the cidery aspect of the beer. About average aroma strength and definitely unique for the style with nice subtle complexities.

T- Dark fruits, cider, scotch mixed with some port, oak, vanilla, a slight cider aspect with apples, cherries, and pears coming through and comes out a little bit more on the finish. Complex, fruity, not overly sweet like a lot of scotch ales, unique, port is fairly subtle, and the beer is quite tasty!

M- Definitely on the light side for a 10% wee heavy, minimal but appropriate carbonation, smooth for the abv.

O- First of all I haven't had too many scotch ales, but this is definitely unique then any others I've had. It was definitely on the cidery side on both smell and taste but it grew on me quite a bit especially when I started to pick out the complexities and how the fruit meshed nicely with the barrel. I'll admit that I haven't been a huge fan of Blue Lobster so far, but this bottle definitely has me looking forward to future barrel-aged releases. Definitely worth trying and worth the $18/bottle in my opinion.

Bottle shared among 4 people and poured into goblets

--Overall hands down best Scotch Ale I have had but its not a style I seek on a regular basis. Our group had two regular wine drinkers who were amazed by how good this was on appearance right down to the sticky and sweet dark fruit booziness

--Conclusion is since this is the 1st anniversary and 1st BA from Blue Lobster, I need at least one more which will be left in the basement for a while. I have a feeling this would develop really nicely over time

A: deep orange with a little bit of brown head. after a sip there is a full coating of syrup that remains on the glass
S: prunes, raisins, booze soaked apples, a bit of red wine smell from the barrels
T: big and bold taste with upfront cherry and raisins that leads into a caramel booze. surprisingly not a hot beer though given ABV and style
M: syrupy, less than medium carbonation, sticky in the mouth with a sweet wet finish