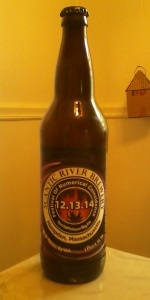 Notes:
View: Beers
Reviews: 1 | Ratings: 3 | Log in to view all ratings and sort

This beer poured out a rich reddish-brown, with a slight haze. A two finger head formed on the top but died down to a thin film rather quickly.

Aroma was initially lightly fruity. Some floral notes were apparent as well. I got some caramel as well, along with a substantial hit of booziness. Some pine and hop resins were present as well.

Taste was a little fruity, at first. I got some caramel malts in there as well, but no hint of the alcohol... it was well hidden. The problem was that the flavor quickly faded, leaving a lingering weak bitterness.

The mouthfeel was a bit watery. There was a little creaminess at first, but that came from the carbonation alone. There wasn't a lot of body.

Overall, it was better than a macro lager like Steel Rail, which has a similar ABV. I was mostly looking for a light buzz, and I got one. Unfortunately this beer cost $6.95 for a 22 ounce bottle, as opposed to $1.40 for a 24 ounce can of Steel Rail. I am glad I had this beer, as an experience, but I wouldn't spend that much again.


Festival Of Numerical Coincidence 12.13.14 from Scantic River Brewery
Beer rating: 3.47 out of 5 with 3 ratings