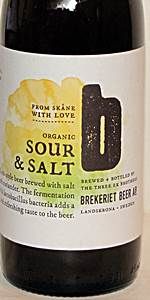 The colour is pale gold, the liquid is hazy. The head is white and airy; it sinks slowly with a fizzing sound leaving no lacing on the glass.

The rich smell is sour with fruit candy, yogurt, gooseberries and some floral notes.

The carbonation is strong, the mid-sized bubbles are fresh and short-lived. The liquid is a bit thick and harsh.

A solid Gose, and as one expect from Brekeriet some extra flavours and complexity is added to this historical style.

Bottle dated 4/2017, BB 4/2022:
The head of this beer expanded like a time lapse of a storm cloud stopped just perfectly at the top of the glass. The beer was near clear straw color before I tossed it the very last of the bottle in with the first 95%. Streaks of cloudiness eventually completely hazed the contents. This head lasted as a thin cap most of the pour.

Upon popping the bottle, I got a rush of tart apple with a little funk. Getting into the beer, that impression isn't changed, though the intensity isn't what I'd expect given that first waft. There's a little of the grain - can't say it's wheat or rye, maybe a little more of the latter, combining with the coriander to have a mildly earthy counter to the sour apple, wet wood funkiness. This has a little bit of a farmhouse feel to it.

A blast of lemon tartness first, which fades to Granny Smith apple, including some skin as my palate recovered. A barnyard funk comes in with a light earthy spiciness. Salt is present throughout, but isn't the interesting part of this beer. Not too heavily carbonated, but the combo of tart and light carbonation brings enough to the feel. Perhaps the softening aspect of the salt is in play here as well.

This is an interesting take, and there's a somewhat Brett-like funk to this beer. It's not huge and loses early against the more sour lactic ingredients. The bottle specifically mentions lactobacillus, but if that's all that's in there, it's coming across differently that it ever has in the past for me. Regardless, the net effect is, as mentioned, a barnyard/farmhouse feel to this beer once the sour aspects let it come out.

A really enjoyable offering. This somehow came across as what I think might be a more classic gose with some new twists involved that aren't focused on fruit of more sourness. I like the outcome.

This is a delicious sour.

Pours an unclear yellow, pretty much no foam.

Smell is very crisp and tart, with lime and apricots dominating.

Taste is very refreshing and crisp. Tart, with mostly lime and apricots. Finishes with hints of mint and basil.

Overall, a very refreshing beer, not all that deep, but good.