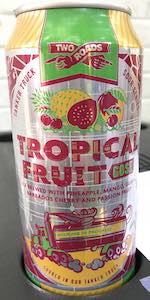 Notes: We kettle soured this ale in our own tanker truck trailer - a former milk tanker [like the one on the front label] that's parked right on the grounds of our brewery!

This beer has a rich blend of tropical fruit notes with hints of pineapple, mango, guava, Barbados cherry and passion fruit. With pleasing tartness, it's a tropical twist on a refreshing fruit gose.

Comes in a hazy, almost opaque bright yellow. Just slightly translucent. Topped initially by a creamy white head of foam--which lasts for a little while, but it does eventually die away.
Smells like a tropical fruit smoothie. Mostly pineapple and passion fruit with a hint of guava, some peach, sea salt, and a detectable acidic sourness.
Tastes mostly like pineapple and passion fruit, but with hints of guava and mango. No real cherry detectable, though. Moderately sour, a nice puckering tartness. Some salivating salinity amplifies the sourness and fruits a bit. A bit of doughy malt in the middle, adding a hint of bread and a creamy body. Finishes out fairly crisp, clean, and lightly dry.
Feels smooth and supple. A bit light as is expected for -5%, but not watery. Actually, it's fairly filling and creamy. Great mouthfeel for the abv. Moderately carbonated.
Overall, a ridiculously good fruit gose. Two Roads always make killer goses, and they really outdid themselves here.

Notes via stream of consciousness: Nice label, nice colors. Hazy straw gold body beneath a two-finger thick head of white foam. Seemingly very good head retention which is unusual for a sour beer. The aroma is mainly chalky/mineralish but there us some fruitiness to it as well. It smells a bit like a Flintstones vitamin. On to the flavor... tart as expected, maybe a 5 on a scale of 1 to 10. Fruity as well, but no specific flavors really stick out. Certainly tropical though. Is this brewed with real fruit? It appears that it is: pineapple, mango, guava, cherry, and passionfruit. Interesting. Oddly I think I get the cherry more than anything else, and that's not exactly a tropical fruit. So what's left? Malt and salt. The malt is light, but seemingly wheaty. The salt is noticeable but not too strong. It's actually quite refreshing combined with the sourness. In the mouth it's light bodied and crisp, giving a gentle zest to the tongue, although part of that is probably due to the acidity as well. Did I already say it's refreshing? It is. It makes me think of being on a sandy beach in summer. One of the better fruit gose I've come across. Oh, I forgot the lacing. The head held up really well but it still didn't leave any lacing. Still, given the style the appearance is quite good.
Review# 6,304

A: The beer is rather hazy yellow in color. It poured with a finger high white head that died down, leaving a thin layer of bubbles on the surface and a narrow collar around the edge of the glass.
S: Moderate aromas of sourness are present in the nose along with underlying notes of tropical fruits.
T: The taste is sour—although not nearly as sour as I would have expected given its smell—and has notes of tropical flavors, with guava standing out in particular and hints of cherries. There is also a bit of saltiness in the finish.
M: It feels light- to medium-bodied and somewhat tart on the palate with a moderate amount of carbonation.
O: I wouldn't call this beer thirst quenching, but it has some refreshing properties and isn't overly sour. It was unfortunate that the tropical flavors weren't a little more balanced because all you really get in this is the guava.

Very excited to pick up a four-pack of this guy... sounds like the most intense and complex of the Tanker Truck series thus far. I thought the Sauvignon Blanc one was a pretty crazy idea, but this really takes it to "11" with the addition of pineapple, guava, mango, Barbados cherry and passion fruit. That's a lot of fruits... how do they all translate into 2R's admittedly-great base sour beer?

This pours a hazy golden color with a huge, frothy head of dense white foam that settles down pretty quickly to a small, one-finger ring in my glass. Some sudsy lace shows up here and there temporarily as I swirl my glass around a bit, but overall this just becomes a pretty static looking beer after a few minutes of intense carbonation activity straight out of the gate.

The nose initially doesn't seem impressive... in fact, I almost got none of the fruit aspects here, which initially discouraged me. Letting the beer breathe for a few minutes in my glass, however, allowed it to open up. Kind of a weird thing to have to do with a gose-style sour ale, but I guess the multitudes of fruit in here kind of demand breathing room in a sense. Eventually, I start to pick up big scents of mango and pineapple with slightly hidden notes of the Barbados cherry (which I guess is a moderately-tangy tropical cherry varietal) in there. Passion fruit and guava are probably in there... guess I'll take the brewery's word for it, but I can't really place them (unless the passion fruit is the cause of the slightly-plasticy thing going on here, which is actually probable given how apparent that aspect was in their straight-up passion fruit gose, now that I think about it). Guava usually has a really dank and intense smell, but it's getting out-competed by the sweet and bright pineapple in my opinion.

The flavor is an improvement over the somewhat unbalanced nose, for sure. The tangy citrus-y goodness of the base beer melds really well with the sweetness of the pineapple and mango here. Tons of bright tropical fruit with a backing hint of guava and even a slight dark fruit-like tartness that is almost certainly the Barbados cherry. Drinkable and hugely fruity with a complex flavor profile, this is a gose I will reach for fairly often!

As for the mouthfeel, this tastes a little sweeter and less drying than some of the other entries into this series. These Tanker Truck sours have consistently had some sweeter leanings, but the Persian Lime and Sauvignon Blanc varieties have been the most well-balanced. Though it's really most likely up to personal taste, I think this is really missing some balancing salinity, for instance, which kind of ends up putting it outside of the "gose" realm. As a tropical fruited sour beer, though, this is pretty unbeatable for the most part. I look forward to consuming more of it!