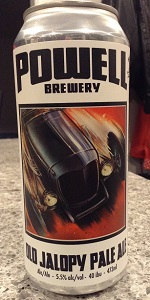 Cloudy red-brown color. Cannot observe carbonation level. Poured with no head at all and no lacing. There is a thin white circle around the glass.

Very complex mix of malt, more than one type of wood (oak and cedar), and some mint. Swirling the glass kicked up the mint and oak.

This is a very complex mix of malts, wood, tea, and mint. Each mouthful pops up something else to the foreground. Slightly tart. There is a medium-mild bitter level that takes over at the end and lasts into the aftertaste. Some cherries popped up for a brief moment once, never to show up again. Similar with some stone fruit flavors that showed up after it had warmed up a bit.

Light tongue tickling at the start with small bubbles. This grows to a foam of larger bubbles.

It is very easy to see why this won a few silver medals in the Canadian beer awards. Each mouthful surprises me with something new. While it is unusual to smell and taste mint, it does not seem out of place or call attention to itself. Thankfully there is no barnyard smell/flavor like so many other local brews.

650ml bottle - nice to see more of this Van City brewer's wares making it over the Continental Divide, and into Alberta.

This beer pours a clear, bright medium copper amber colour, with two fingers of puffy, rocky, and bubbly ecru head, which leaves a few instances of hovering organic alien spaceship lace around the glass as it quickly dissolves.

The carbonation is fairly active in its working-man's frothiness, the body an adequate middleweight, and mostly smooth, just a weird pithy astringency taking a wee tithe out of it all here. It finishes off-dry, just, as the lingering limey malts carry on with a stiff upper lip, and the Yankee hops continue fading into the woodwork.

Overall, this comes across as an attempt to sex-up a boring old English Pale Ale (isn't that what an APA is in the first place?) with some American hop varietals - but not nearly enough of them. Kind of boring, and not really something that I would want another of, even if offered it.

Poured from a 650ml bottle.
A: Pours a slightly hazy Orange Amber with a thin white head and some lacing.
S: Some Pine and Citrus and faint floral nose.
T: Crisp and dry with hops in the background.
F: Nice carbonation not heavy or sweet at all.
O: A really nice Pale Ale i bought the last bottle where i live if they get more i will pick up a few more.

Serving: On tap at the brewery tasting room, served in a 12 oz tulip glass.

Overall: Really tasty and drinkable - a display of balance and restraint. Everything needed is there without needing to shout.

This poured a translucent golden colour with a white head that quickly disappeared. The nose had some citrus hop and definitely some grainy malt. The taste revealed much of the same but it was very subdued. I was expecting a bit more of a defined flavour based on the nose but it came across as "okay". The body and carbonation was on the medium side even though the beer "finished" quickly. It was good but not spectacular.

I got the cool looking 1litre Boston Round growler of this beer and I must say that it deserved the gold medal at the Canadian Brewing Awards. It is a luscious beer with plenty of hops but a interesting malt base that is almost on the sweet side. It is an original pale ale that is incredibly drinkable yet has some complexity as well. Impressive beer from an up and coming new brewery.

canucklehead from British Columbia (Canada), May 20, 2013

Old Jalopy Pale Ale pours a bright red amber with a beautiful fluffy head. Definitely towards the darker end of the spectrum for a pale ale. The aroma is rich, nutty toffee malt, with some nice fruity esters. Malt dominates the flavor, with more raisiny caramel malt. The malt is balanced by a fairly strong hop bitterness. Some herbal, earthy hop flavor comes through, and the bitterness lingers just a bit in the finish. There is an odd, slightly sour character in the flavor that detracts just a bit from the beer overall.

Fresh off winning beer of the year in Canada, I had to give this one a try. It's really solid, but not an every day drinker at $6-7 a bomber.

Appearance. Pours a murky amber-brown with a finger of off-white head.

Smell. Citrusy hops, some toasted grains and a little pine and caramel.

Taste. Toasty, slightly sweet caramel malts, citrusy and floral hops with a light bitterness and a touch of cedar.

40 IBU
A: cloudy buckwheat honey
S: sharp pine and citrus; rather muddy instead of fresh; grapefruit rind, pine,
T: where's the taste? Thin and practically flavourless. Low bitterness and fruit. Some dryness in the finish. Nothing there but it doesn't taste off so I don't know what's going on.
M:Thin, light.
O: did I get an off bottle? This came highly recommended but what I taste here I don't see why. They're a new brewery so maybe haven't got all the kinks out yet. I'll have to give them another try ...

Sweet malty notes, light hops on the citrus side and mildly bitter esters, (pardon the vagueness I'm a little stuffed up this morning so the nose will skew the scoring,
I will revisit)

Sweet, medium roasty malt with medium dark berries. Mild hopping that is lightly sharp but smoothed by the texture. Some resin and bitter fresh pine and gentile citrus.

Mouth feel is smooth and heavy with a gentile and luxurious silky carbonation.

Wonderfully easy drinking Pale Ale with a medium high hop level. Good balance between citrus and bitter dry hopping. Just a little too sweet, but drinkable beyond belief. coming in at 5.5% is just right, a solid 4 just not quite 4.5.
The nose and especially the taste will probably bump slightly upon re-review, and my sense of smell returning.