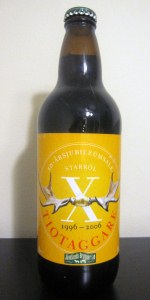 Notes: Brewed to celebrate the 10th anniversary in 2004.
View: Beers
Reviews: 3 | Log in to view all ratings and sort

Thanks to bosse for this rarity. Best before December 2007. Served in a FoBAB '08 taster pint.

A - Pours with a half-finger of quick-dissolving tan foam that settles to a thick ring. Not much in the way of lace. Semi-transparent mahogany cherry brown color. Looks pretty solid.

S - Smells like an aged English strong. Light sherry-esque oxidation, dark fruits, chocolate-covered cherries. Verging into old ale territory, but with some light medicinal notes. No obvious alcohol, though I didn't expect much from a four-year-old 7% beer.

T - Taste has faded, and shows some mild oxidation and a light metallic touch. As it warms it reveals more of the flavors from the nose - chocolate malt, a touch of dark fruit. Finishes with a burnt sugar and caramel note that lingers into the aftertaste.

M - Surprisingly carbonated, more tingly and biting than I like. Body is a touch gritty, but otherwise feels medium and sticky. Finish is a bit dry, with some residual stickiness as well. No obvious heat.

D - This was interesting to try, but clearly shows why lower ABV brews don't age so well. If there is someone hoarding this beer, drink sooner rather than later (i.e. last year). I had no problem refilling my glass, but I wouldn't seek this out again either.

Bottle from Alex aka Masterski. He always comes up with some crazy shit to drink...this is no exception. Bottle says best by December 2007...let's see what the heck is up with this one. From bottle into tasting glass.

A - Pours a dark cherry reddish/brown, off-white head with a slim ring around the glass.

T - I'm getting a bit of a metallic taste here, some dark chocolate, cherries, coffee, with some medicinal qualities. The alcohol is hidden very well, no real detection.

D - Pretty damn easy to drink, although the metallic and medicinal notes I pick up take away from truly enjoying it. Not bad, but not great.

(50 cl bottle from the special order segment of Swedish Systembolaget)


Tiotaggare from Jämtlands Bryggeri AB
Beer rating: 3.67 out of 5 with 3 ratings