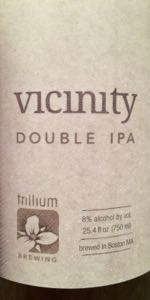 Notes: Originally brewed in celebration of the first anniversary of Row 34, our favorite Fort Point oyster bar and craft-beer purveyor, Vicinity highlights a neighborhood collaboration of passion and vision. The beer's appearance is a yellow straw-color, with a significant haze. Heavy citrus aromas of pineapple, orange flesh and mango dance on the nose and palate. The pilsner malt provides a medium body and wraps up each sip with a slight balancing bitterness.

Very hazy yellow, little white head.
Guava, riped fruits, citrus, a bit of weed, a bit of alcohol, peach.
The taste follows, a real fruit juice with a strong hop presence, almost hop burn. Some wheat notes.
Low carbonation
Very nice double neipa even though I'm not sure this is really better than some of the examples of the style we more easily find on this side of the Atlantic (Verdant, Cloudwater, etc.)

Poured from a can dated 9/23/20 into a tulip glass. Pours a thick orange-yellow color with minimal head and some lacing (could be due to a gentle pour). Big scents of orange pulp, pineapple, mango. Really juicy flavors of citrus (orange, kumquat) and the finish is reminiscent of some sort of boba tea concoction I got in Chinatown once, maybe the tapioca pearls. Really pleasant lingering bitterness and hop oils on the palate.

My can was packaged 04/28/20. I don't know if a fuller head would normally be expected from this beer, but if that is all I have to gripe about, well, it's not much to worry about in the grand scheme of beer tasting. The balance, depth, and complexity of the beer is otherwise phenomenal.

You know i pounded 7 of these and I did not even yak. Had a killer hangover, but luckily I had one left and that helped with the shakes. Mind you, I am a 300 pound former NFL lineman so I know how to put them back. Overall, I would say very crushable and I would recommend.

***By Far, The Best IPA I have Ever had in my Entire Life***
I've consumed 1000s of IPAs from all over the world. It's been a hobby. My brother sent me this Vicinity and I'm hooked. Trying to get Trilium to ship to Naples FL.

As a HUGE Trillium fan, the Vicinity sticks out of the pack as my favorite Trillium to date. Creamy, creamy head. Smooth, buttery aftertaste. I refer to this as the "Nectar of the Gods" in the Beer World. If I could only have 1 beer for the rest of my life, this is the one

Pours nearly opaque pale straw in the glass with a finger of rocky white head. Nose of nectarine ice cream, mango, candied pineapple, crushed grains, slight black pepper, guava and a distant onion. Taste follows the nose with lots of sweet tropicals. Higher bitterness than normal for a Trillium smoothie with some decent drying. Medium+ sweetness and a low rolling carbonation leading to a soft medium body. A wonderful brew but nothing to freak out about. Maybe I've had too many Trillium brews.

A: Poured from the can into a tulip glass. Body is hazy yellowish with a half-finger of white head that settles quickly.

Another home run NE IPA from Trillium. Copper orange and hazy, tropical fruits, piney, citrus on both he nose and the palate. Nicely balanced and extremely quaffable for the abv.

Vicinity pours a light, straw yellow with a bit of murk from the flaked wheat. No real head (old can?) or lacing present. The smell is big citrus with orange, grapefruit and pineapple with a hint of mango. The taste has a medium body over the palette with pineapple and a hint of grapefruit, slightly bitter finished with some alcohol.

You might hate them or love them but this looks the NEIPA part nice bright haze with glow yellow orange .strong smells ripe tropical notes without the rotten notes .
Taste where it turns in the wrong direction over taken w more over ripe fruit muddled nothing stands out or layers mouth fell is average to a touch thin ...

A: The beer is very cloudy whitish yellow in color, which becomes darker towards the bottom of the can. It poured with a half finger high bright white head that quickly died down, leaving lacing on the surface and a narrow collar around the edge of the glass.
S: Moderate aromas of grapefruit are present in the nose along with notes of limes and pineapple.
T: The taste follows the smell and has more balanced flavors of pineapple and lime with hints of grapefruit pith in the finish. Only a slight amount of bitterness is perceptible.
M: It feels medium-bodied and very juicy on the palate with a moderate amount of carbonation.
O: This New England IPA is very juicy and really packs the in the hops in the smell and taste. I liked the combination of limes and pineapples in the taste.

Canned on Aug/09.
Drank on Oct/12.
Poured to a BrewDog stemmed glass.

A: Body is a vibrant mix of yellow and orange that's totally opaque. Head is minimal, existing only when pouring.
S: There's tons of hoppy grassy tones with a citric base that's even hard to explain due to the intensity of the hop aroma. It's too prominent actually.
T: Taste starts off so sweet, having hints of vanilla, orange, tangerine, mango, peach, even a bit of milk can be felt here. After this genius mix of flavours the beer ends with a perfect grassy hoppy tone that's very solid.
M: Body is medium to high. Carbonation is perfect. Alcohol is unnoticed. Bitterness is high. Generally speaking, this mouthfeel is genius.
O: This is some of the best Trillium beers I've had so far.

Can. From Zombier. In Teku glass. Playing Avernum 5. Really strong frutality and bitterness, with some milkshake ipa reminiscences. Good but didnt live up the hype, as it is nothing that more accessible breweries cant do nor surpass

This is a great NEIPA. Departs from some of the standards but is still a great beer. I appreciate the level of bitterness as it balances the immense pineapple and papaya that the hops give off.

T: Follows the nose to a large degree, but with more citrus prominence. Finishes with moderate bitterness and acidity, bitterness clears quickly while the acidity lingers. I liked that it wasn't crazy sweet juice.

F: Medium bodied with medium-high carbonation, lively on the tongue with some burn from the carbonation and acidity, slick on the swallow.

O: Loved the nose and taste, didn't feel this hit the normal creamy mouthfeel of a Trillium NEIPA. Liked the bitterness element, and would gladly repeat if given the opportunity.

CAN: Acquired at Trillium. 1 pint formt with a minimalist white label and a standard pull-tab.

Served cold and fresh into a nonical pint glass.

HEAD: ~1cm in height. Off-white colour. Not as dense or thick as would be ideal. ~8 minute head retention. Leaves no lacing as it recedes.

BODY: Turbid dull orange. Haziness is obvious. I see no yeast/lees within. Nontransparent as a result of its turbidity. Lacks the vibrance and life I'd expect in a world-class imperial IPA, but it's certainly enticing in a general sense without looking unique or special. I do have to wonder if filtration would render it more attractive (I reckon it would).

Suggests a fruity imperial IPA with no trace of hop bitterness or alcohol. Not the India Odwalla Ale aroma I've come to anticipate in wilfully turbid IPAs, which is a plus. Doesn't seem yogurty or milk sugar-redolent (also a plus).

Aromatic intensity is moderate. I detect no off-notes. Lacks overt yeasty or malty notes (save for generic pilsner malt/wheat sweetness).

TASTE & TEXTURE: Mysteriously light on the palate, tending almost a bit thin in spite of its medium-bodied presence on the palate. Has a very brief flavour duration as well.

What it does well is disguise its ABV devilishly well. Hop bitterness isn't present at all, but the erasure thereof seems to come with the tradeoff of losing hop pungency (my main issue with this Johnny-come-lately turbid {I}IPA trend).

Well balanced generally speaking, but not dialed in to ideal harmony. Not the most complex imperial IPA out there either, but it's not simple - just wanting in terms of intricacy.

Has a pulpy yet thin feel on the palate. Could have a fresher juicier taste. Frankly, I think the hop profile could be better. Well-carbonated. Somewhat refreshing. Not oily, gushed, hot, boozy, astringent, harsh, rough, or scratchy.

OVERALL: I'm not sold on the nascent imperial IPA trend, but this is one of the better executed expressions of the style I've had recently. It flirts dangerously close with India Odwalla Ale territory given its juice-like flavour profile, and were it slightly boozier it would invite comparisons to a well-made Screwdriver, but I enjoy it for what it is even if it's nowhere close to world class level in my book. Not a beer I'd stand in line for or spend $16+ a 4 500ml pack for, but to each her/his own.

When I first cracked this, it was the first beer from Trillium that I had ever had. I have now come to think that Trillium is second in New England only to Hill Farmstead.

Crisp and clean but with some floaters too! Nice tropical fruits up front give way to a solid bit of hoppy bitterness on the end. Refreshing and satisfying double here that doesnt taste like a double.

Delicious. Smooth with tons of flavor. Fruity, hazy, with a great finish. Definitely not overdone with the alcohol content like some double IPAs have. To be honest surprised it’s a double IPA almost to smooth to be a double.

Pours a golden peach with a fluffy fast dissipating head. Aroma is big on mango and pineapple with a piney crackery malt note. Flavor is tropical fruits, slightly bitter hops, and a soft malt backbone. Goes down smoothly with a crisp finish. A well crafted DIPA.