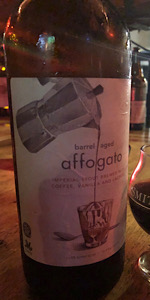 Sweet and fairly viscous, dark chocolate mocha liqueur and swirls of rum vanilla are delivered to the palate immediately and expressively. The barrel is quite present with a lightly woody maple bourbon warmth as a semi-sticky sting brings out some black pepper.

I'm surprised how complex, deep and rich this is. Having this so much later than all their other collaboration stouts, it's no wonder they all carried so much hype behind them. This is clearly their best work in the barrel aged collaboration stout series, and being their first, they set the bar high. A bar that, IMO, they never hit again. Even after all this time, for a coffee beer, this held up well because the quality is there.

Huge pastry stout but barely carbonated and too sweet to finish the glass.

A- Motor oil elixir from the 750ml to a becher. A one finger light tan head has a foamy consistency and good retention. Small webs of lace.

T- The booze and sweetness pickup and for the most part the big things get more prominent simplifying the experience somewhat. Spicy whiskey and medium toast oak with plenty of booze leading into the big sweets and dessert flavors. Vanilla is massive with caramel, toffee, roast barley, dark chocolate, cocoa powder, hersheys chocolate, deep roast espresso beans, fudge and some dark dried dark fruits like fig but those are mostly an afterthought.

MF- Heavy as it gets with a slightly frothy consistency and that syrupy oily sugar heft. Warm from the booze with medium carbonation.

A great mixture of a boozy whiskey barrel, dark chocolate grains and espresso.

The whales continue to flow. Lots of hype surrounding this, but Trillium doesn’t often dissapoint.

Awesome flavors, the highlight of the beer no doubt. Not overly sweet, with subtle tobacco and tons of semisweet chocolate and roast coffee to balance all the components. Hints of oak. Really good.

Body is medium in thickness with a good level of medium carb. Gives the beer a good feel, but doesn’t overpower it in any way.

Pours pure dark, thin little head. Smells straight bourbon. Flavor is sweet and boozy, and roasty at the very end. Bourbon lovers rejoice -- but if you want a more tame beer, try the regular Affogato or the more flavorful Tiramisu.

Enjoyed at the Copenhagen Beer Fest. Reviewed from notes.

A - Poured a nice dark black with a rather thin light head that faded rather quickly to leave light wisps.

S - Very, very nice aromas of coffee and chocolate syrup and fudge. There are some rather faint bourbon notes along with a little bit of barrel. Pleasant vanilla as well.

T - Taste is similar to the nose. Big, bold coffee aromas along with fudgy chocolate and brownies. The vanilla is quite pleasant along with some real good bourbon juice flavour and oak. No real alcohol either.

O - Overall this was a very nice stout with excellent coffee and chocolate notes. Vanilla is quite nice as well as the bourbon. Would have been the stout star of the fest if not for a few others.

Shared on 3-11-18 at SP release. Pours pitch black with minimal head. Smells much different than the regular version. Less coffee and more sweet vanilla notes. Awesome big and rich vanilla notes on the palate, and the barrel transforms this beer into a creamy full bodied beast. Loved it.

Incredible, coffee, chocolate and vanilla notes hit the nose. Tastes like a pasty at 15% it's not very boozy at all, just balanced and smooth. Incredible. Mouth feel is thick but not as thick as something like TG-Assasin , but easier drinking. A+

On tap at wakefest. Had a few pours because of how good it was. Black color. Tan head. Motor oil thick. Fudgy with all of the pastry stout adjuncts. This was a real treat and worth they hype.

Man does the barrel bring out the oakiness and the vanilla. Pours think and dark black. Minimal tan head. Smells of sweet chocolate. Has a wonderful chocolate and vanilla flavor without much of the booze back end taste. Really well balanced. Wonderful

On tap at Trillium Brewing in Canton, MA.

This one pours a fairly dark black, with a small head and not much lacing.

This is exceptionally sweet, but it’s undeniably tasty. The coffee flavor melds really well with the sweet cake icing flavor. There’s some caramel turtle candy flavor, a nice silky and very sweet bourbon character. Some spice from the oak would help balance this, or a bit of roast.

This is kind of syrupy, with a very thick and rich body, and a very soft level of carbonation.

This is a little too sweet to be perfect. However, it’s unbelievably decadent and very tasty.

Poured from a 25.4oz bottle into a tulip glass. Big nose of coffee, chocolate, and barrel. Quite the creamy stout. tastes of chocolate, coffee, slight whiskey, and hints of vanilla on the back end. Great mouthfeel, creamy and chewy. Loved regular Affogato, and this BA version brings it to the next level.

Aroma is coffee and barrel

Near pitch black appearance. The thick, oily body was topped by a small, frothy, khaki colored crown that quickly fell to a thin collar. Some spotty, streaky lacking stuck along the glass.

Mocha notes dominated in the nose. There was a fairly big coffee presence but perhaps not as much as I was anticipating. Cocoa notes were quite apparent. Chocolate syrup came to mind. Moderate bourbon/barrel notes. Good dose of vanilla as well. Fairly sweet overall but not excessively so.

The flavor profile was similar to the aroma but a bit punchier. Mocha notes again dominated. Loads of coffee and chocolate. Nice mix of both milk and dark chocolate. Somewhat reminiscent of brownie batter. Super malty. Vanilla notes also came through strong. There was a fairly intense bourbon presence on the back end. The beer finished with some rich, roasted malt notes, booze and lingering sweetness.

Uber rich and decadent mouthfeel. Completely full bodied for the style. The liquid contained a fine, fairly subtle effervescence that turned super creamy, frothy and smooth on the palate.

Affogato is a fantastic beer, and this bourbon barrel-aged version was terrific as well. That said, it was not much of an improvement on the original. The coffee/espresso seemed to be a bit mellowed by the barrel-aging process, and the bourbon notes were more subtle than I anticipated. All in all, an awesome beer but perhaps not one you should should give up your cellar to acquire.

Look: Pitch Black with thin khaki head. Has low carbonation.
Smell: Espresso, vanilla, lactose, and peppermint.
Taste: Sweet, Espresso, vanilla, and lactose.
Mouthfeel: Medium full and chewy.
Overall: A very good stout, but not much better than the base beer,

Poured as a very nice rich black color with a brown head on top. The smell of the beer reminds me of sweet roasted mashmallows a bit. The taste has a nice amount of the coffee and vanilla coming together but I don’t pickup on much of the barrel notes. The feel is full bodied and rich. Overall it’s a very good Brew.