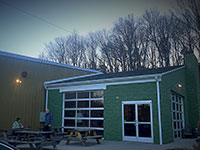 Notes: We love our home in the Blue Ridge Mountains of Virginia, and we love the Blue Ridge Parkway, a 469 mile scenic journey of mountainous wonder that showcases the natural beauty and unique heritage of our region. Beautiful vistas, distinctive music, oddball characters and fantastical folklore are just a few of the things that make our home a special place. Here in the Roanoke Valley, we have all of this in our backyard— and it’s enough to make a man mighty thirsty. At Parkway Brewing Company, we will take you on a journey you can savor, one delicious beer at a time.

Reviewed by Ajtucker350 from Virginia

V - The is (what has become) the typical open building with garage door access for warmer (or COVID) times. Clean, open, good amount of seating, they have some comfy chairs in the back room. The fire place is a nice touch. More of a college, let's drink a lot vibe, but definitely welcoming and warm. 4.25

Q - I've had their beers from a bottle at different locales around Virginia. I had the Toasted Soldier during this first visit to the brewery (see my review). Decent beers that would keep me coming back if I lived local. 3.75

Ser - Friendly and informative about their beers and other related info. All you can ask. 4.0

Sel - An average variety when during our visit. The brown ale with currants is unique and risky, which is what I like to see. (tired of IPAs and sours and nothing else). 3.75

Reviewed by StoutHobbit from Virginia

Reviewed by Blu_Hound from Florida

3.88/5  rDev -3.7%
vibe: 4.25 | quality: 3.75 | service: 4 | selection: 3.75
Really good communal vibe. Lots of outside seating as well as a living room and fireplace where a band was playing. Pretty decent beer selection, but nothing too dangerous. Staff was friendly but very busy. Food truck was good but ran out of food quick. I would like to try it again and probably will!
May 01, 2017

Rated by JaminStov from Virginia

3.97/5  rDev -1.5%
vibe: 3.75 | quality: 4 | service: 4 | selection: 4
Have been here twice, once on a beer tasting tour and the second time was for their yearly oyster festival. Not much in the way of frills, but they are a smaller brewery. Friendly people working there, the oyster festival was loads of fun despite how cold it was. Good selection of beers, particularly of ones they don't normally bottle. Not a bad place to spend an evening listening to music and knocking back a few.
May 12, 2016
Rated: 4.06 by ccanterbury from Virginia

Rated by markjarema11 from Alabama

3.93/5  rDev -2.5%
vibe: 4.5 | quality: 4 | service: 3.75 | selection: 3.75
Visited on a warm Friday June 27th afternoon. I really like the location of this place in an old light industrial site backed up against a wooded hill. It gives the feeling of being in a clearing out in the woods (which reminds me of my high school kegger days back in Western Washington). They had a cool three piece band (mandolin, guitar/dobro, upright bass) playing an interesting mix of styles (blues, jazz, etc but not bluegrass). The crowd was a little older than your usual brewery patrons, but everyone we talked to was nice.

They only had five taps going including a witbier, kolsch, Baltic porter, and two IPAs. I'd already had their Get Bent Mountain IPA around Roanoke and really liked it. I found everything else to be okay. The bar (the only service) setup was a little awkward being deep inside the building despite most of the patrons sitting outside. It would be better to have the bar closer to the door or even an outdoor bar. There's plenty of room inside the building and Parkway's website indicates an expansion is in the works of both brewing capacity and diversity of styles.

They don't serve food but there was a food truck on hand.

Reviewed by bdubs22 from Virginia

3.89/5  rDev -3.5%
vibe: 4 | quality: 4.5 | service: 4 | selection: 3
I've been here now numerous times and have always been impressed. My 1st time arriving at Parkway Brewery was before it's soft opening had occurred (a non-affiliated website posted the wrong date) and me and my friend went in only to discover they were still in the process of getting everything set-up. Upon noticing us, the owner and his wife as well as the brewmaster introduced themselves, and then the brewmaster proceeded to give us a full-tour of the facilities and equipment. I've returned several times since, always being impressed with their beers, particularly the Get-Bent IPA and Raven's Roost Baltic Porter. They provide bottled beer, both in 6-packs as well as 22 oz bottles, as well as growlers. My only complaint (and I can hardly even call it one), is that the last 2 times I've been, their version of an Imperial IPA has been unavailable (they said because of an inability to secure enough hops from a west-coast supplier) and since they have only 4 other beers, options are limited. That being said, you will not make a bad decision because they are all great beers, and the environment is great with picnic tables and a very laid-back atmosphere to be enjoyed by all. Live music also comes through here regularly!
Mar 13, 2014

Reviewed by bigkingken from North Carolina

3.86/5  rDev -4.2%
vibe: 3.75 | quality: 4.5 | service: 4 | selection: 3
I've been here a lot in the past year and I have to say I'm pretty impressed. Everything is expertly crafted and executed. The Belgians are especially on point, and the Baltic porter is one of the best examples I've had. Definitely worth a stop if you're in the area...

Southwestern Virginia isn’t exactly a mecca for breweries. They are few and far between, and those that do exist aren’t of an outstanding caliber. Sufficed to say, there is plenty of room and plenty of market for newbies in the area. And apparently someone finally got the memo.

Parkway Brewing Company is the newest kid on the block, joining two other small breweries in Roanoke and just a handful of others within an hour’s drive. The Brew Master knows the area, having decided to jump ship from the largest brewpub in town (Roanoke Railhouse) to start his own place along with a likeminded local dreamer. My guess is that they will succeed.

The brewery isn’t much to look at. It’s a warehouse space in the industrial district of Roanoke’s next-door neighbor of Salem. They’ve got the front painted nicely to proclaim the name of the place, but not much else in the way of signing. The parking lot is too small to accommodate the number of drinkers in the moderately sized city. The interior is concrete, mash tuns, fermentation tanks, and everything else needed to produce the wares. A couple of days per week, some ropes are strung, tables put out, and employees man a few taps behind a simple bar. It’s not so much a tasting room as a tasting area.

However, the tasters are actually tasty. I was fairly impressed with the fledgling brews. The IPA has an intense, distinct citrus note that intrigues for a pint or two, but begins to become wearisome after more. The Belgian pale ale is a wonderful combination of European sweetness with American ingenuity. I might actually be able to drink an entire growler of it. The third beer – just released the day of my visit – is a dark and smoky porter. It is full and rich, but with a nuanced taste profile that gets overwhelmed by the IPA and Blonde if switching back and forth between the three. I need to try it sometime on it’s own for a true feel of its flavor.

Since the brewery just barely has a tasting area, it certainly does not have a kitchen. The role of food provider is played by a food truck happily sitting away in the parking lot out front. There are at least two that I know of that have taken up residence, and as far as I can tell, both are viable options to say the least.

All in all, I look forward to returning here and I think as more beers are developed, the brewery will grow in size and acclaim. The rating for this place is going to undersell it because of their current lack of selection. Once they get more beers on tap and evolve a bit, I think the score will easily bump up to a 4ish range.

3.81/5  rDev -5.5%
vibe: 3.5 | quality: 4.25 | service: 3.5 | selection: 3.75
OK, first of all, if you don't know where you are going, they do not have a proper sign visible from the road, but the address is good for GPS. The brewery is in a repurposed manufacturing plant with an area cordoned off for the tasting room. Got here right as they opened, they had music from Pandora going, but the staff was there to talk about their beer and serve you. Beer is very fresh and ALWAYS served in proper glassware. You have to go to the bar to order, but it is a small place, so not too surprising. They have 5 beers on tap currently, and the beer is all good. Beer is reasonably priced, $3-5 per serving matting on beer and a $5 sampler of 4 beers. This is a place you should stop by, to try the beer and see the murals.
May 22, 2013

Reviewed by JK4Stout from Virginia

3.57/5  rDev -11.4%
vibe: 3.75 | quality: 4.25 | service: 3 | selection: 3.25
Ok, I want to make this short and sweet. First this is not a negative review even if it is a little low. I really enjoyed this place. The IPA was great...extremely fresh. They only have two styles available now (IPA and a blonde), but more to come soon. Once I get a swip of the Double IPA and Belgian Dark that should be ready soon I may come back and up the rating a bit.

I will say service could have been much better...