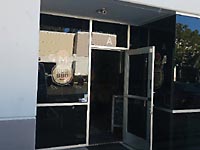 Cool brewpub located on a quiet cul-de-sac in an industrial park. Corner space in a large industrial building with small entrances on both sides of the building. The brew house runs along the east wall with a corridor separating it from a large square kiosk that has restroom on the north end and a small bar on the south side. Essentially it a big square in the middle of the room with water stations and tables on the west and south sides. There is also an outdoor picnic/ game area with additional seating. The bar itself seats about a dozen and there were 20 assorted beers as well as a few hard seltzers and kombuchas. I had the Non-Visible Spectrum which was nice. Friendly bartenders. There is food available; I believe from a separate concession within the building, but as I did not try any I'm not quite sure of the set up. Nice laid-back atmosphere, the place seemed like a great place to hang out in the pleasant California weather.

This was a cool little place. Very small. Nice and clean though. I had a Russian imperial stout, it was tasty, but nothing amazing. Prices are good and it's filled with locals. I wouldn't travel an hour to get here, but I would stop by if I was in the neighborhood.

Fun place, went on a Sunday afternoon around 3 or 4, wasn't too packed though the AC must have been broken because it was so humid in that taproom. Decent selection, IPA was fresh and the food truck selection was nice. Overall a decent stop I would recommend to anyone (and right around the corner from toolbox, might as well hit both if you're down here!)

This is a fun, hidden gem in the industrial forests of Vista, about 4.5 miles from our home. An unassuming attached industrial facility at the end of a cul de sac yields an intimate tasting room right smack in the middle of the brew floor. Food trucks grill up culinary pairings with the diverse round of taps. Very friendly staff; the local feel is palpable. Very happy this up-and-comer (they were founded in late 2012) is getting some well-deserved attention.

I was very impressed with this relatively new outfit known as Belching Beaver. The tasting room is very well themed with Beaver related puns on signs, which normally would seem too low brow for me, but it fits a friendly drinking environment nicely. There was plenty of seating, and it was very busy. Even though there were probably more people than the fire code would allow, I was able to get my beers very promptly from two friendly servers. I have to give props to these servers; they just seemed to be switched into high gear and were still very composed, dealing with the crowds.

The beers were good to excellent, with IPAs in a West Coast style, and some really good sweet/milk stouts, one with peanut butter added was especially good. My only complaint was that there were no higher ABV beers over 8% or more. The lineup was mostly beers I can buy in bottles, so a few more special beer taps would be welcomed.

Overall, other than dealing with a very noisy, and party hardy, crowd, I would frequent Belching Beaver quite a bit.

Recently visited (7/27/13) Belching Beaver Brewery as a stop on our groups 4th annual San Diego brewery tour. I had some mental reservations as to the tongue & cheek humor of the name (one of the beers is called "Me So Honey") but went in with as much of an open mind as could to let the beers speak for themselves. Got the 4 beer taster flight for $7, where were actually about 8 oz pour tasters, making that a deal at about $3.50 for two 16 oz pints.

The place was clean, with a modest crowd, and a truck grilling up sausages outside. All of the beers I had were clean, balanced, & solid, and that was the consensuc amongst the majority. They also had a barrel aged offering which was quite nice. A solid new brewery for the area, & San Diego.

(Was on the same tour as UCLABrewN84)

I recently stopped in at Belching Beaver on our annual beer bus tour. It's a fairly large open space with a bar, extra seating, and the brewing equipment all near each other. This brewery is new so everything was clean and well kept. They had 10 of their beers on tap with a wide variety of styes represented. All of the beers I tried were served at a good temperature and in proper glassware. Service from all of the staff was good and everyone was friendly. The prices were reasonable, especially for the tasters. I would definitely make a point to come back here again if I was in the area.