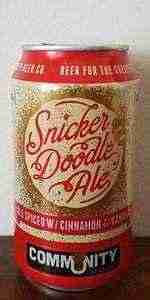 Served on tap in a pint glass
Appearance – The beer is served a lightly hazed amber color with a one finger head of white foam. The head has a decent level of retention, slowly fading over time to leave almost no lace on the sides of the glass
Smell – The aroma of the brew is strong of a cinnamon smell mixed with lots of doughy malt and some brown sugar and caramel sweetness. Overall the aroma is very akin to a snickerdoodle cookie. Quite delicious.
Taste – The taste begins with very sweet caramel and brown sugar flavor mixed with a little bit of a molasses and cinnamon taste. The base is also heavy of a bready and doughy flavor which complement the sweet rather well. The cinnamon, while heavy in the nose, is very light upfront, with it getting slightly more potent as the taste moves forward. All the while the doughiness gets a bit stronger and leaves one with a sweet and lightly cinnamon spiced taste to linger on the tongue.
Mouthfeel – The body of the brew is chewy and thick with a carbonation level that is rather low. For the cookie like taste and the cinnamon spice, the feel is great and makes for a very nice dessert like brew.
Overall – While the taste is not like a snickerdoodle in a glass it is quite nice and makes for a rather nice dessert like brew overall.

Notes from 1/10/2020.
Poured from a 12oz can into a tulip glass.
It pours a deep golden with two fingers of white foam receding at an average rate with a small amount of thick lacing. 4.00
The aroma is a bit less than moderate in strength. It smells like a snickerdoodle cookie with notes of vinegar around it. I was going to give the aroma a 4.00 but the vinegar smell would pop up right before taking a sip. It reminds me too much of drinking apple cider vinegar. 3.00
The taste is a bit less than medium in strength. The snickerdoodle taste is just like you would expect but without much sweetness. 3.75
The mouth feel is a little less an medium with light carbonation. 3.00
Overall, I probably would have liked it more without the vinegr notes. 2.75

Can from a beer store in Austin, TX:

This could easily have been cloyingly sweet additive-ridden swill, but I'm shocked how genuine its flavours are, This is a beer I need to revisit in finer grain to properly condone. The premise may seem gimmicky, but damn if the execution isn't solid.

Wow! I was impressed with this beer. Let me state that when I bought a can to try I had low expectations. But I was surprised. Poured from a 12 ounce can, this beer had a nice head. The aroma was that of a snicker doodle. I was expecting it to taste cloyingly sweet, but to my delight that was not the case. It has the snicker doodle flavor, but it has a refreshing bite and a very clean finish. I will buy a six pack next time.