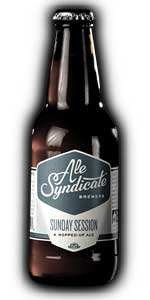 Spending some time in the windy city. Picked this up at a Binny's mix a six.

Overall : A winner. I was expecting this to not really impress me, but it did. I'll go back for more.

A lighter brown in appearance

Smelled of Jamaican rum and coffee

Tasted of muted coffee and toffee

I am glad I got to try this at a tasting, but will leave it at that.

To look at it you'd think you were in for something pretty good - unfiltered and pale straw, nice head, a little lacing. I'm just not getting much of anything when smelling, even as the brew warms (started at about 50 degrees). It was more interesting right out of the fridge, and even that was almost entirely some bite (and not much else) that fades into... meh. The feel isn't bad - it is about right for an unfiltered lighter beer. Overall, I don't know why somebody would buy this again, and I'm happy I only got one as part of a mixed six.

Pours a hazy, gold color. 1/2 inch head of a white color. Great retention and great lacing. Smells of yeast, sweet malt, pale malt, hint of alcohol, hint of dark citrus, hint of hop, and a hint of orange. Fits the style of an American Pale Ale. Mouth feel is sharp and crisp, with an average carbonation level. Tastes of sweet malt, pale malt, yeast, hint of orange, hint of wheat, and a hint of hop. Overall, good appearance and aroma, but weaker body, and average feel.

the session ipa is getting huge these days, everyone is on board, and more and more just keep coming out. this one stands a little distinct from the crowd, with some really lively hop flavors, citrusy, probably most similar to easy jack from firestone as far as hop flavor, but this beer has a lot more flavor than easy jack, enough body to still be a beer, and some actual grain presence. honey to orange in color, really sunny and bright, with a featherlight few inches of frosty white foam. spider web lace as it drinks. lots of orange peel and fresh squeezed orange juice to me, lots of citrus, but different than the usual citra hop and lemony flavors we describe all the time, this has a definite florida orange vibe, but still enough bitterness to not be sweet at all, and in fact finish rather clean. pale two row malt throughout, but in enough amount to add a nice cereal grain front end to it, this is awfully full flavored ale for such low abv. a great example of set style, maybe a little more body than it needs, but i have very little to critique with this one. i think I've had other beer from ale syndicate, but this is the first i have reviewed. id be curious to try some other stuff, as the quality here is on display. all day type of beer.

Pungent aroma of orange peel and citrus. Taste is citrusy and lightly bitter, melange of orange and grapefruit, hop driven but easily drinkable. Light bodied and smooth with a dry bitter aftertaste. Enjoyable and one to seek out.

Poured into a clear balloon snifter.

S - Smell is predominated by a funky, earthy, almost brett-like yeast presence, with some bready honeyed biscuit malts lingering in the background. Maybe the faintest notion toward piney hoppiness, but this thing is mostly all yeast and malt forward. Pleasant enough if you enjoy that type of thing. Maybe slightly buttery / diacetyl in the nose.

M - Feel is crisp and clean, with some residual breadiness, mild metallic aftertaste, and perhaps just a hint of hop resins. Light-bodied with good carbonation.

Overall, a tame and crushable pale ale if there ever was one. Not exactly breaking any boundaries on the flavor profile, but it works well enough for a pale ale. It wouldn't be my first choice, but I'd have it again. I look forward to more from this brewery.

Beer pours a light golden brown with a nice frothy head. You can smell the hops right away, but upon taking the first sip, you realize that there is very little bitterness at all. It tastes like this was dryhopped aggressively, with only a small amount of hops in the boil. The finish is refreshing and the body and mouthfeel are pretty light.

I would love to have a 6 pack of this in my fridge in the summer!

Sunday Session Hopped-up Ale from Ale Syndicate
Beer rating: 81 out of 100 with 108 ratings