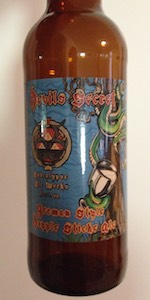 Notes: Our collaboration with Devils Backbone, the Devils Secret is a rare German Ale called Doppel Sticke. The base style is an Alt Beer but like it’s german counterpart, we have jacked up the malts and hops to provide a rich, full bodied dark ale using the finest German caramel and dark malts. The flavors exude dry fruits and toffee with notes of chocolate and raisins.Only the finest German hops are used in ample quantities to balance this rare German ale to perfection!

A 22 oz bottle received as a gift. The only date information is that it is the 2016 Vintage. (With it being a rotating offering and one first entered in the database in April of 2015, I'd guess this was probably released this year sometime in April, making about 6 months since bottling.)

The 11 oz pour into a Duvel glass shows a nice rich dark brown beer with some dark reddish undertones. The 1 1/4” tan head slowly but visibly recedes to a thin layer on the surface and a small ring, leaving no lacing on the sides. Sipping creates scattered patches of lacing, most of which slide down the sides back down to the liquid. By midway through the beer the foam and lacing have pretty much disappeared.

The aromas include some toasted malt which seems a lot like dark bread, some chocolate, some dark fruits, and some very light hints of toffee.

The flavors are much as expected from the nose, with the toasted bready malt, the dark fruit character (plums and/or raisins) and the chocolate showing. Also present is some toffee like sweetness from the malt. There is also some persistent, earthy bitterness way in the background.

The mouthfeel is medium bodied and smooth with the persistent gentle carbonation. The finish begins as the sweetness and other flavors begin to mostly fade away, moving to the back of the palate and leaving the final word mostly to some persistent earthy bitterness as it emerges from the background while fading more slowly.

Overall I’m finding this beer just a bit too much on the sweet side until the very end of the finish and even then the residual dark fruit flavors still seem lightly sweet. While I’ve enjoyed having it to drink and review I don’t think I’ll be buying another one for myself. I’ll check myself when I finish the bottle tomorrow night, but don’t really expect my ratings will change much.

Overall: a big beer with big flavor. Quite sweet. A decent Alt rep.