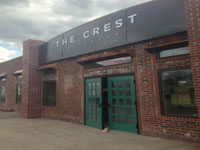 Great restaurant, pretty good craft beer bar. Lots of interesting choices on tap. Good local stuff with a few from farther away thrown in. Service was fine but the food is the real star here.

This place is interesting. Not sure if it wants to be a restaurant or a craft beer bar focus, but it's a departure from most craft beer establishments in Columbus with it's casual earthy vibe and an eclectic food menu that seems like it wants to cater to everyone from vegans to true carnivores.

In terms of the beer, they have 50-60 taps with no bulls*** on draft, the latter is always refreshing to see. The selection is absolutely outrageous at times. I think there were 5-6 barrel aged offerings on last time we were there alongside 15-20 Ohio beers (pretty well curated Ohio list I might add) and a long list of world brews. Pretty awesome we have a place like this in town. Our bartenders were both extremely helpful and if they didn't know something, they wouldn't hesitate to seek an answer or let you sample anything.

If your from out of state and land in Columbus hoping to drink good craft beer, this is the spot I'd recommend to anyone for the weird, expensive, and rare offerings. They get everything there is to get.

Probably the best place to get craft beer in Columbus! There tap selection is unrivaled and features an all Ohio section, as well as craft breweries from across the country. They have harder ti find beers on tap, and an extensive bottle list as well.
Service and quality of the place are also top notch. Parking is limited. They've added seating, so that should help with the wait.
Prices are reasonable and fair, especially considering the Columbus area. It is family friendly.
The food is outstanding and they take to heart supporting local farmers and the local community. This place is not to be missed, and I highly recommend any craft beer and food lover to stop here! It is always my first stop once back in OH!

Go ahead and look up who the owner's of this place are. The same 2 douche bags that have made a living ripping off the clintonville community with their other business scams the last several years. It's really no wonder that I hated this place when I learned that information. Shit rolls downhill, right?

Now onto the more descript review:

This is more of a lady-friendly, fancy-ish trendy type of place. This is where you take a girl on a date, not where you meet your buddies to watch the game. Looks nice inside. They were going for that rustic look here. Usually a decent beer selection.

Staff is usually unfriendly, unhelpful, and too busy avoiding you for this place to be worth a stop. Most of them are angry, upset, difficult to communicate with. Seems like a sh*tty place to work. Most people enjoy the food here, but its a little to trendy and salad-y for my liking. You are looking at $16.00+ for one sliced tomato with cheese and balsamic on top. Pretty and pathetic all in one.

I'm not sure why people are knocking this place..

Best beer bar in town in terms of selection. The food is perfect gastropub style food. Sunday there is great with half off all day on drafts.

Good food, good service, not a long wait. TVs for sports, but it usnt a major distraction if you don't. Beer list is diverse and well rounded. Overall a great gastropub.

Cool little joint in the middle of Clintonville. Speaking of Clintonville, this is THE area for craft beer in Columbus; besides Crest, there is Weilands, Savor, Studio 35, Pace High and probably more I can't think of right now. Visit this area if you're driving through Columbus and need some good beer.

The tap list at Crest is fantastic, but will run out quickly - especially for those one-off rare beers.

One negative (or positive depending on how you look at it) - a bit pricey. You won't see college kids coming here to get drunk on Bud Light, and that's always a good thing.

The Crest Gastropub needs to be on your must visit list if you are visiting Cbus and love craft beer. The place is small but a wonderful atmosphere and great service, the food was just wonderful. My glass was empty very little, and wish I would have more time ti visit!

If you are in the Columbus area and enjoy drinking craft beer, this is the place you need to be.

I've been here 10+ times now, and the fact that they have at least 2 beers I've never heard of, multiple sours on seemingly all the time, and a vast array of small time breweries featured on their 20 Ohio handles never ceases to amaze me. The happy hour is awesome (half off drafts 3-7) and if you go on Sunday, all beer is half off 2-close! Makes for an affordable afternoon, even when you're sipping on Hoppin Frog BA Boris or Pannepot Reserva.

The food is of the same quality and perfect for the atmosphere the bar creates. Granted, it gets real busy for dinner, but it's well worth the wait. I'd try and find a seat at the bar if you're planning a trip.

They also host beer dinners on a monthly or bi-monthly basis, which can be a great way to spend you're time and money. They did a Jolly Pumpkin dinner recently that was literally out of sight. Well worth the $60 considering it's 5 courses/5 pairings. Def worth checking out.

Early yesterday evening (Saturday), I finally made the trip out of the northwest suburbs and down to Clintonville to see what all the fuss was about regarding The Crest.

Atmosphere - The Crest, while small, is charming. Inside it's a cross between modern and rustic yet it felt very intimate and cozy (especially the day after a snowstorm). The bar area is in the middle of the restaurant and there are tables of varying sizes that surround the restaurant. Unfortunately a small restaurant with a lot of patrons can make things a little crowded and uncomfortable, especially for those of us who are bigger in size. Clintonville is a cool neighborhood with kind of a weird mix of folks from all walks of life and The Crest reflects that in its patrons and is another testament to how cool this neighborhood really is. My only big complaint is that there is VERY limited parking. There are maybe a dozen spaces in front of the actual restaurant and not directly on Indianola Ave. Other than that you have to drive around and try to parallel park on one of the surrounding streets. They were doing a free valet service about halfway into my dinner and I ended up getting double-parked by one of the "valets" even though my spot was perfectly legal in their lot. To be fair they moved it without even being asked when my cousin noticed it and mentioned it to me -- so at least they have good hearing.

Quality - Proper glassware for every style of beer. I kept trying to throw curve balls with the beers I was ordering but they kept hitting them with the proper glassware. One of the only places in the Columbus-area that I've had proper glassware for EVERY beer I ordered. They know their stuff here! I ordered the Crest Burger and you could tell that all the ingredients were fresh, they cooked it exactly to medium-well and for being such a good burger, no greasy mess whatsoever! My cousin got the lamb lollipops and the lamb was perfectly cooked. Even my fries weren't greasy or over-seasoned and perfectly cooked. The quality here blew me away compared to other "Gastropubs" I've been to in Columbus.

Service - Our server was pretty knowledgeable about the beer they had on tap and made some good recommendations to my cousin who isn't as familiar with craft beer as I am. She watched our table like a hawk until our food and drinks were done and until we got the bill I would have rated the service as perfect. She gave me the bill and then walked away. It took 20 minutes for a different server to notice the international symbol for, "Hey! I want to pay for my meal because we're done!" He was really nice about taking care of that promptly when he noticed but my original server should have noticed. I know that they were busy, basically full, but 20 minutes to run a credit card is ridiculous.

Food - The food here is awesome. A simple house burger and fries ended up being one of the best burger/fries combos I've ever had in my life. My cousin was a little more adventurous and got some apple & cranberry encrusted lamb lollipops that turned out to be amazing. We shared an apple tart with vanilla bean ice cream and that was also done to perfection at every level. The chef and kitchen staff really are top-notch at The Crest.

Value - The price for draft beers is kind of expensive. Granted, their selection is pretty good and there is a big focus on local; be it for drinks or food -- nearly all of it is from around Ohio (or a nearby state if not from Ohio). A 10 oz. draft of Jackie O's Java The Stout was $8 at 5PM on a big college football Saturday. A 16oz. draft of Brew Kettle Winter Warmer was $6.50. You can go further out to the suburbs or other places in Columbus and get the same draft sizes at the same time for at least $2 less. The food was great but the portion sizes were pretty small. A great 6oz. burger with some locally grown mushrooms, peppers, onions, and cheese with homemade buns was $11! You can get burgers that are just as big & good at other craft beer joints in the city for almost half that price. If the portion sizes were slightly bigger or the prices were slightly lower, I'd be more likely to frequent this place.

Tried The Crest for the first time yesterday (5/12/2013). 50+ handles (99% craft), and more than half are Ohio beers. Amazing draft list! At the table we had 2 different Jackie Os, Rockmill Cask Aged Tripel, Weyerbacher Insanity, Fat Heads Up In Smoke, and a Weasel Boy Anastasia. Glassware was very clean and correct for all beers. Generous pours and awesome prices!

The food was on par with the draft list. Not a huge menu, but everything was on point. Most items are house-made and it shows. They're serving brunch now on the weekends, and from what I've heard, it's incredible, too (I will update my review once I've had the brunch).

This is a must-stop joint for any craft beer geek or foodie in Central Ohio. I can't wait to go back. Cheers!