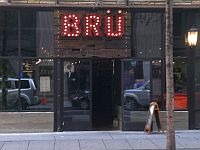 4.53/5  rDev +13.3%
vibe: 4.25 | quality: 4.25 | service: 4.75 | selection: 4.75
Went to Brü Craft & Wurst last weekend and had a great daytime session. Not many people at this very cool looking space, so we had the bartender all to ourselves for advice and samples. The draft selection was excellent and it had a really impressive bottle lineup as well. I had the Coppertail Pruple Drink, The Bruery Share This OC (stout), Nebraska Sexy Betty (BA stout) and then topped it all off with Deschutes The Abyss. Damn great round right there.

They had solid craft standards as well such as Allagash White, Ayinger Celebrator Doppelbock, Half Acre Daisy Cutter, Duvel, and then a bunch of beer garden session worthy brews such as Jever Pilsener, Warsteiner and Weihenstephaner hefe.

Only knock on this place is when we went back at midnight it was converted into a club, complete with DJ and the techno music blaring, so that kind of sucked. I'd go back in a heartbeat for day drinking. Added bonus is the staff attire.

It's a nice looking place with a concrete floor, reclaimed wood on the walls, a black ceiling, and exposed brick back bar. With all of the wood and darkness it looks kind of like a modern lodge. There's a garage door at the back though, and natural light filters through. I'd imagine that opens up when the weather's nice to allow for a small amount of seating.

The menu claims to be mostly Bavarian but I didn't find that. Perhaps they've never been to southern Germany. There are wurst and a schnitzel, and even a pretzel (you do find them at bierkellers), but that's about it. For center city Philly I'll say it's reasonably priced, and fairly decent.

The beer, however, is what we come for and they've got a great selection, including beers that you probably won't find elsewhere. There are 36 taps and 120+ bottles that include American, German, Belgian, English, Italian, Swiss, and Japanese options. There are local beers as well as west coast domestics and quite a bit from in between - you'd be hard pressed to find something that you haven't had or weren't interested in.

The service is OK but the girls are cute. Worth trying if you're in the area.

3.4/5  rDev -15%
vibe: 3.75 | quality: 3.75 | service: 1.75 | selection: 4.25 | food: 4
Went for dinner and a few drinks on a Tuesday night. Happy it wasn't too crowded. Tap list is pretty solid, with nice mix of German, local and national beers. Pretty deep bottle list, too, that I didn't get into. The food wasn't exceptional, but it kept me happy -- wursts, some salads, sandwiches, German entrees. Nice enough ambiance. The thing I didn't like was the service. I'd sit with an empty glass for fifteen minutes before my waitress would come. Took to asking for bus boys for beers, and she still was exceptionally slow. Other servers seemed on their game.
Aug 03, 2016
Rated: 4 by Canada_Dan from Colorado

Reviewed by sloizeaux from New Jersey

As you enter past the small outdoor seating area, there is a hostess station straight ahead. The room seems pretty narrow with the bar on your left. It is nicely decorated and on a Tuesday evening at 7 p.m. was slammed. There was a happy buzz in the air.

We actually chose to sit at the bar downstairs. The downstairs space is more Spartan and doubles as a music room with a small, elevated stage by the bar. All things being equal, I would recommend you sit upstairs.
The tap selection was decent. They were out of a few selections but that seems to happen at a lot of spots. One of my beers was clearly past its prime and once the two bartenders sampled it from the tap, they were apologetic and quickly gave me a substitute.

Speaking of bartenders, they were friendly enough, could recommend beers and were free with samples. No complaints there.

The food was good and I was happy to see they did their own pickling and curing in-house. This is a trend I can easily get behind.

I would have no problem returning.

Reviewed by XsoldoutX from Pennsylvania

3.85/5  rDev -3.8%
vibe: 4 | quality: 4 | service: 3.25 | selection: 4.25 | food: 3.75
Went here on July 23rd 2015 and sat at the bar. My bartenders name was Chris and he clearly had other stuff going on and didnt ask me how my meal was. Wasn't busy, really, and wasnt very friendly. Hey, we all have off days so its not the end of the world. The place, however, was awesome. 32 beers on draft as well as another 6 on a separate, self-serve area. Good stuff. Had more vegetarian-friendly stuff than I had thought they were going to, so that was pretty sweet. Will certainly be back, and def was pretty impressed. Lots of good looking ladies work here, by the way, in case you were wondering... I know you were.
Jul 23, 2015
Rated: 4.09 by ShanePB from Pennsylvania

You'll find young dudes and dudettes, couples with children, businessmen, some beer nerds... not a whole lot of folks there drinking Lost Abey Angel's Share, but hey, I'm not going to complain. More for me!

The atmosphere could be described as corporate-lounge-meets-sports-bar-and-Hooters. All the girls working there wear super-short-and-tight pants and are pretty hot. The music can get loud and the bar can get crowded on a Sunday night when the game is on, but if you stop by on a weekday during downtime, then it is fine.

Check out the bottle list- they have a big selection of wild ales and sours, including lambics, smoked brews, Bruery and Cascade and more.

Prices are alright, six-seven bucks per beer and four-buck brews for happy hour. Better beers are $8, but really not a bad value for the location.

I will certainly come back here, but only at certain times and depending on the tap list.

3.93/5  rDev -1.8%
vibe: 4 | quality: 4 | service: 3.75 | selection: 4
Stopped in here late one night with a friend of mine while we were bar hopping in Philly. The place was pretty packed but from the look of it I could see myself going back sometime when it's not so busy. There is a pretty good selection of beers to choose from whether it's on tap or in bottles/cans. The one cool thing is that they have taps where you can pay and pour your own beers.
Oct 31, 2014
Rated: 4 by tkdchampxi from New Jersey

The atmosphere may be good here during the day or during the week, but it was basically a night club atmosphere - dark, with blarring loud dance music. Totally clashed with the German beer hall theme they were otherwise shooting for. Groups of idiots ordering bottles of Miller Lite when there was a ton of world class beer for drinking.

Great beer line up of German standards and American craft beer. Drafts available in half liters or full liters. Prices were high, but as expected in downtown Philly.

4.07/5  rDev +1.8%
vibe: 4 | quality: 4 | service: 4 | selection: 4.25
This is a large place with two entrances - one on Chestnut and one on Drury St across from McGillan's Pub. The door were open on both sides so a bit of fresh air moves through the place. The restaurant and bar area are all in one open space with a bunch of high ceilings, brick walls, and loads of wood. Numerous TVs showing sports . There are some outside tables that were all packed with beer drinkers. The bar is alrge and can seat about 20+. They also had some of the newer fill your own beer machines in the back of the place. Not sure how they work, but I did see a few people using it. The crowd was on the younger side here too.

There was about 30 beers on draft here, including some interesting finds for me. Avery Maharaja, Anchor Zymaster #4, Alesmith Speedway Stout, Natian Cascadian Dark Ale, Bear Republic Hop Rod Rye, DFH Festina, Victory Summer Love, and Lagunitas IPA were some of the choices on my stop. The beers I had were fresh.

Since the bar was full, I opted for a high top and my waitress was super friendly and responsive to any beer related questions I had. Since I stopped here for a few after dinner beers, I did not try any of the food.

I will definitely stop here again on my next Philly trip. This is another great addition to the Center City area.

4/5  rDev 0%
vibe: 4 | quality: 4 | service: 4 | selection: 4
Accessible from the alley in front of McGillin's or the main entrance on Chestnut street this long open eatery beckoned us before arriving back at out hotel. Large technical bar perched on the left side middle of the house boasts 20 or so taps focusing on local and German brews. Today we stopped in for a special Stone tapping and we were not disappointed. We did not have any food here, but the plates floating by smelled great. Service was attentive and the brews were enough to keep this out of towner interested. I'd go back again in a heartbeat and I'd love to sample the food. Philly is a great town!
Jul 03, 2013
Brü in Philadelphia, PA
Place rating: 4 out of 5 with 37 ratings