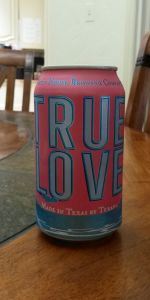 True Love is our second sour beer that is now available year-round. Similar to the Salty Lady, it is kettle soured and very refreshing. Raspberries are added in the fermenter which provide a purple hue and slight sweetness. Give it a try. You'll fall in love with True Love, one can at a time.

With summertime right around the corner, True Love is your best option for a poolside brew. Grab the cooler, pickup some ice, and crash your neighbor's pool party. Maybe snag an extra 6pack and be sure to spread the love.

Rated by wac9 from Pennsylvania

Reviewed by BiologyBob from Texas

3.83/5  rDev +2.4%
look: 3 | smell: 3.75 | taste: 4 | feel: 3.5 | overall: 4
Today, I am CANcentrating on The CANQuest's (tm) problem children. They are those beers who do not know how to behave in (especially) warm/hot weather & decide to test the limits of their aluminum CANtainer. If I CAN identify them in time, I will move them up in the queue of the backlog & throw them into the reefer in the hopes of salvaging it. Other times, I only hear a metallic "TING!" followed by a gushing explosion. 8={} In those cases, the CAN is dumped, rinsed & placed in The CANQuest (tm) Bag o' Shame to be displayed whenever I go for a lecture.

From the CAN: "Imperial Raspberry Sour Ale"; "Made In Texas By Texans".

Once again, I had some difficulty in Crack!ing open the vent & when I did get it to go, it beCAN streaming out. 8={} I quickly went to an inverted Glug to get it directed into the awaiting glass & not onto the counter or worse, my laptop. Once things calmed down, I had just under two fingers of fizzy, foamy, bubbly, bone-white head that quickly devolved to wisps. Color was a cloudy Amber (SRM = > 7, < 9). Nose smelled like my late-paternal grandmother's raspberry bush, albeit with a tartness that caused my lips to purse. Mouthfeel was on the light side, not watery, but not far from it. The taste was more tart than sour, but definitely of raspberries & actually quite refreshing. Finish was tart, dry, refreshing & a nice interlude on a hot, humid Summer's day.

Pours pinkish amber with a small head and not much carbonation. Smell is tart and definitely raspberryish.

3.96/5  rDev +5.9%
look: 3.75 | smell: 4 | taste: 4 | feel: 3.75 | overall: 4
A: The beer is slightly hazy yellowish amber in color and has a moderate amount of visible carbonation. It poured with a quarter finger high white head.
S: Moderate aromas of raspberries are present in the nose along with notes of sourness.
T: The taste follows the smell and has flavors of sour raspberries.
M: It feels light- to medium-bodied and somewhat tart on the palate with a moderate amount of carbonation.
O: I really liked the combination of the blackberries and the sourness in this beer. It had some refreshing properties.

Appearance: nice golden hue with just a little touch of haze and a good effervescence. Head is a think layer of frothy white foam; I like the look.

Smell: a little bit of tartness along with an earthy raspberry aroma. Not too bad.

Taste: this beer is quite tart indeed; tarter than I'm used to in a kettle sour. The raspberry flavor is decent; the overall effect is surprisingly earthy, as in the aroma. The raspberry could be turned up a bit in my opinion, though.

Overall: this is a refreshing and decent beer; I think the tartness is good, though I'd like it better with a little more fruitiness.

Sourness is mild - maybe a 3/10 - comparable to a gose or Berliner weisse. Has some acetic acid/vinegar acidity as well as some vomit-redolent off-flavour (butyric acid, I suspect) which many will find off-putting. Fruity flavours of pink grapefruit and depleted raspberry do appear but feel artificial as if delivered via cheap puree/fruit extract instead of actual fruit.

Finishes with a pleasant lactic smackiness, but is smooth and wet through most of the body. Well-carbonated. Neither crisp nor soft. Medium-bodied and of adequate thickness.

In spite of its butyric acid off-flavour, it's a drinkable enjoyable brew for what it is, and while I wouldn't buy it by the sixer it's by no means a bad brew especially for its more than reasonable price. Still, it's competing in a market wherein Anderson Valley's gosen are widely available and still more superior albeit less widely distributed expressions of the style are also about. I struggle to imagine who'd buy this over a sixer of Blood Orange Gose (or even Austin Beerworks' Einhorn), but I suspect they live in the DFW area and insist on buying local beers for local beers' sake.

If they can get that butyric acid under control, this could be rather good.