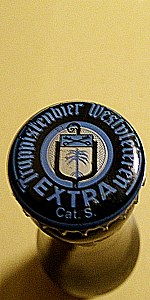 Thanks eric5bellies for being the first one to rate this extra. I always believed the Bros did not want to post this beer...i was wrong!

In the last four years that i have been drinking more craftbeer then before that period i have had this extra several times. The first one came out of a cellar from a dutch guy in the south of Holland. I bought several extra8 and redcaps from this man for a very decent price. I believe they were from the late 80's. Lots of them were shipped to the States.

The second time is got a few was when i visited the abbey of Saint Sixtus in 2011 to pick up my monthly amount of beer. Brother Michael had saved some old bottles for me in the storageroom. I got some old dubbels (4 abv/which were undrinkable) some redcaps and one extra.

The last time i got me some was from my good beerbuddy Bart (bartjebeergeek). That one was poured a few months ago with my buddy Wim, Beerpirates, @ my place.

We drank a redcap before the extra8 and the redcap was gone...way before it was good but not anymore. Pretty disappointed with the dubbel we opened the extra. Bottle from the late 80's (again). The bottle blew us away. what a solid beer after all those years.

No carbonation left although we heard a sizzle when opening the bottle. Smell was still inviting and the taste was portlike. We enjoyed every sip of it.

Well what a privilege to taste this beer. I bought two from a guy who's grandmother lived close to the abbey and stored them in her cellar for many years. I was told that they are circa 1978.

I couldn't think of a better beer to commemorate my 700th !

A - Wow this beer still has head. It is two fingered and retains before reducing to a film that laces. The colour is a Redish cola colour, very inviting.

T - Up front some massive fig notes before being completely overpowered by some nice port barrel aged notes that are extremely refined. I remember talking to one of the monks at St Sixtus that told me old Westlveleren tasted like port and he is so right ! The finish is boozy but yet so subtle.

O - What a privilege to taste this beer. It is indeed more like a port that a beer. The way it has stood up is remarkable. I bought two of these and will revisit this beer in 20 years time. It is a testament that beers brewed with love, such as these, stand up to time.