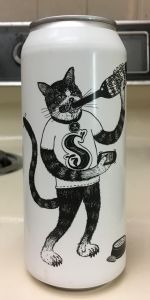 I got a can of this beer off the single shelf from my local Giant Eagle. It poured a hazy golden with white head that is leaving some lace. The scent had a nice subtle bitter citrus presence. The taste was nicely balanced and easy to drink with bitter hop base and subtle citrus highlights. The mouthfeel was lighter in body with good carbonation. Overall its a good beer.

S: not getting much. A faint new-age hoppiness, but it is very faint. Slightly sweet, ever so slightly tropical.

T: the arrival really lacks character; just a vague faint hoppiness. But it picks up steam around the middle, delivering crisp malt, some tropical notes, and a light tropical bitterness that lingers a moment.

M: comparing this to session IPAs, it is awesome. Lighter end of midweight, and more crisp, more attenuated than the Madtree PSA I just had. With this low ABV, that is not necessarily a good thing.

O: in appearance and taste this is VERY similar to Madtree PSA, but PSA gets the nod over this for having a stronger tropical hop aroma, richer texture, and more expressive taste. This is still an awesome session beer though, and I might just buy it over PSA because it’s local, has cool can art, and comes in tallboy cans.

1 PINT can
Served in a nonic pint glass

This beer pours amber with burnt orange highlights. It has a slight haze and is topped with two inches of tan head that leaves spotty lacing.

The aroma is citrusy with a little biscuit from the malt.

The taste is citrus and caramel malt.

It is easy enough to drink. It is nothing special.

16 ounce can, canned on 09/29/17. Served in a pint glass, the beer pours a clear dark gold color with about an inch off-white head. Head retention and lacing are both good. The brew smells like bready malt and pine/floral hops. Taste is pretty much the same as the aroma, with a nice hoppy bitterness in the finish that doesn't linger around for a real long time. Mouthfeel/body is light, it's smooth and easy enough to drink. Moderate carbonation. I thought this was a good, easy drinking hoppy session brew. $9.99 a 4-pack.